Skip to main content
Labels
Posted by Jonathan May 06, 2013

This past semester, I had to go back and revise an article relating to the first generation of Puritans. For that, I did a review of recent scholarship. Now, if there's a list of well-trod subjects in American religion, Puritanism would have to be near the top. Yet, in the last few years there have been several good new studies published, proving that there is more to be said about those Puritans.

I might start with Sarah Rivett's Science of the Soul in Colonial New England. The book has been reviewed on this blog here, but let me just reiterate my enthusiasm for the project. I really appreciate Rivett's interdisciplinary approach, bringing the language of theology together with the language of the developing natural philosophy (i.e., modern "science"). I had the chance to hear Rivett give a work-in-progress seminar last fall, and I'm excited about her next project on translation projects in early America.

Next, I picked up Francis Bremer's First Founders: American Puritans and Puritanism in an Atlantic World. I really appreciated Bremer's big biography of John Winthrop, so I was interested in seeing what he would do here. Bremer attempted to write for a popular audience, bringing Puritans, if not to the masses, at least to a few more people. To do this, he attempted to bring narrative energy to early New England Puritanism through telling the stories of about 20 different people. That group is large enough to include both men and women and orthodox and non-orthodox (by Puritan standards) voices. I could see this book working really well in an undergraduate course. It would be an interesting way to launch a course on American Religion, but it could also work for an Atlantic World or Colonial America course.

Expanding interest in the Puritans among a larger public also motivated David D. Hall's newest contribution A Reforming People: Puritanism and the Transformation of Public Life in New England.

Hall has added another elegant study to his ongoing career of describing Puritanism. This is another attempt to wrestle with why the Puritans might still matter. He examined both their civic ideals and how they worked out in practice. Hall finds a commitment to Communitarianism—Puritans practiced Compromise and were devoted to the Public Good. I especially enjoyed his final chapter, which was  a case study of Thomas Shepard’s Cambridge, and there he describes the extensive efforts those early settlers made to keep the peace and encourage fair treatment of citizens. 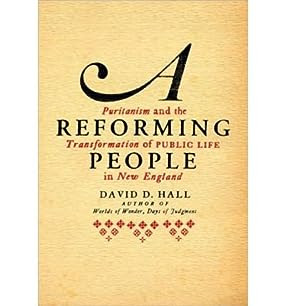 One more book and some shameless self-promotion after the break...

The final book was Michael Winship's Godly Republicanism: Puritans, Pilgrims, and a City on a Hill. Here, it would be easy simply to link to two good reviews by Mark Noll and Thomas Kidd.

But let me add a few notes of my own. It turns out there is a lot of overlap between Hall and Winship’s books—which Winship notes. Still, the book is worth looking at for the breadth of reading in Puritan writings. As with previous Winship studies, this book demonstrates a deep engagement with Puritan sources on both sides of the Atlantic. Winship specifically examines extended Puritan debates about the shape of governance. Almost half of the book is set in England, before the Puritan migration. Winship also does more with Plymouth Colony, as a contrast to what happened in Massachusetts Bay.

For my money, one of Winship's most interesting contributions is to describe the seventeenth-century republican writer Algernon Sidney as a Calvinist and as a Puritan. Hence, Sidney's republicanism bears traces of earlier Puritan debates.

The pay-off, then, might be to think about connections between Puritan republican tendencies and the republicanism that contributed to the American Revolution. Rather than being simply an eighteenth century import, republican political thought may have found already-tilled soil in New England.

Oh, and that article I was revising? I'm pleased to say it's found a home with the Journal of Church and State. It's forthcoming, but there's an advance access copy here.

The article describes the life and thought of Henry Dunster, a far-too-little-known Puritan of the first generation. Dunster seemed like a proto-typical Puritan, as well as an intellectual leader--he was the real founding president of Harvard. He was near the center of Bay Colony life until early in the 1650s he came to oppose infant baptism. This position raised not only a theological challenge but a political one. Because baptism and church membership was connected to citizenship in Massachusetts Bay, reworking the theology of baptism entailed significant political re-thinking. Dunster's challenge was not well-received, and he was banished from the Bay Colony. Still, his new position on baptism and the politics it entailed pointed forward to options adopted by Baptists in the eighteenth century.
Email Post
Labels: 17th century Algernon Sidney Puritans reviews

Mark T. Edwards said…
As it so happens, I've been looking for a replacement book on Puritanism for my colonial America course (Innes's Creating the Commonwealth worked ok but Foster's otherwise brilliant Long Argument was too burdensome). This is a great help, thanks so much!
May 6, 2013 at 7:30 AM

Unknown said…
Your article on Henry Dunster is clear and informative. Congratulations - Dunster is worthy of your careful attention.
There's almost nothing about Dunster in documents from Scituate, other than James Cudworth's comment that Dunster was not among those who persecuted Quakers. Cudworth wrote in December, 1658, "we have as yet amongst us worthy Mr. Dunster, whom the Lord has made boldly to bear testimony against the Spirit of persecution" (in Cudworth's contribution to -The Secret Workes of a Cruel People Made Manifest - (London, 1659), reprinted as appendix 6, in The Seventeenth-Century Town Records of Scituate, Massachusetts, vol. 3 (Boston: NEHGS, 2001), pp. 390-420.
Jeremy Bangs
May 6, 2013 at 5:22 PM

Thanks for taking the time to read the article and confirm Dunster's near silence in Scituate. I do appreciate that at least he spoke boldly against persecuting the Quakers. There's a nice parallel there.