Merritt on the Mainline: Part II of Panel on Coffman's The Christian Century

Part II of our panel on Elesha Coffman's The Christian Century and the Rise of the Protestant Mainline. 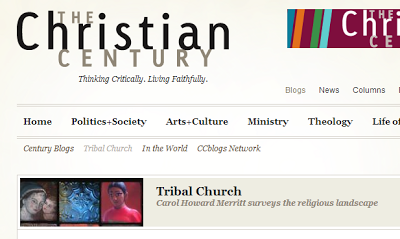 Author, pastor, blogger, twitter-er, co-hoster of God Complex Radio, among many other "ers", Reverend Carol Howard Merritt is one of the most important voices of liberal Protestantism in the United States. She writes a regular blog at The Christian Century, named after her first book "Tribal Church". Later this summer, we'll have a panel response to her Reframing Hope: Vital Ministry in a New Generation.

As pastors, we tend several fires at once. We have our congregation, the members who pledge time, energy, and resources to the worshiping community. We work with our neighborhoods, in the hope that we can be instruments of peace and justice.

Though the care and nurture of those flames can be all consuming, we also have another facet to our complex jobs. We have a responsibility to be a public voice—one that attempts to take the mouthpiece of the prophets and proclaim justice and mercy. Sometimes our outcries can be a lone utterance, a beckoning in the wilderness. Other times, we call out from the seat of power and influence. Either way, we have that prophetic office, the one that compels us to do justice and love mercy.

Elesha J. Coffman presents one aspect of that voice in The Christian Century and the Rise of the Protestant Mainline. Dr. Coffman constructs a view of the liberal church in the United States through the lens of the influential magazine and she focuses on its cultural capital. Coffman often goes back to the theme that The Century carried much of its weight in prestige, class, education, and elitism, rather than followers or charism.

Coffman begins by drawing out the meaning of the term “Mainline,” explaining that it originally referred to “the railroad leading to the elite northwestern suburbs of Philadelphia…populated by Pennsylvania Railroad executives and other prominent, wealthy Philadelphia families after the Civil War” (5). I had heard that folklore, but Coffman’s book was the first time I read the metaphor in print. (As I result, I’m trying not to use the term any longer.)

It is through that sort of academic and privileged influence that The Christian Century gained prominence. The flames kept burning brighter with the fuel of controversy. In fact, the wrangling between the Century’s editor, Charles Clayton Morrison, and its contributing editor, Reinhold Niebuhr, is the most fascinating portion of this book.

It’s difficult for me to read The Christian Century and the Rise of the Protestant Mainline without making comparisons to the groups that I visit now. Working with historically liberal denominations, some congregations occupy a space of cultural capital, but not many. Mostly, men and women work in rural settings, among aging members. They often experience declining attendance, and a gnawing frustration that they’ve done something to create the decrease.

Yet, among the shrinking budgets, there is a renewed sense of innovation and openness to creativity and mission that groups don’t always have when they’re occupying positions of privilege. There is a streak of activism and risk in a new generation of pastors that often startles me out of my complacency. And there is a yearning to hear the voices of those long-silenced in our society.

Several years ago, Dr. Beau Weston, a sociologist in my denomination (the PCUSA) decided that we ought to go back to our glory days by “Rebuilding the Presbyterian Establishment” and the denomination published a paper promoting his ideas. His voice resonated with those who thought that we had focused too much attention on diversity quotas while we ought to have been using the strategies that worked in the past—focusing on the elite and building our social capital.

Yet the paper enraged the young progressives in our denomination, as they longed to build a movement from the roots, trying to break free from the classism, racism, and heterosexism that too often mark our denominations. They longed to make amends for the wrongs that we had done in our grasping for privilege.

For me, Coffman’s history reminds me of how far we have come, as a culture and as denominations. We might have lost the cultural influence that once made us “Mainline,” but it seems that we have learned some things in the last few decades. Perhaps we have shed a bit of our Christendom, and we can continue to be church, caring for one another, working for “the least of these,” taking care of our neighbors, and attempting to be a public voice.
Email Post
Labels: carol howard merritt Christian Century Elesha Coffman liberal Protestantism twentieth century