Skip to main content
Labels
Posted by Carol Faulkner May 22, 2013

Free Love in the Burned Over District 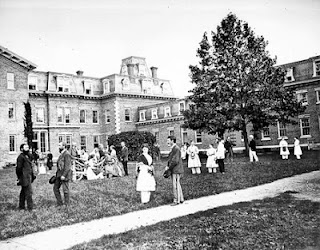 Where to take out-of-town guests in central New York? How about the site of a historic free love commune? The Oneida Community Mansion House is a short (by CNY standards) 40-minute drive east of Syracuse. The mansion house is still home to some descendants of John Humphrey Noyes's communitarian experiment, the Oneida Community, founded in 1848. The site of the 2012 Communal Studies Association meeting, the Mansion House includes rental apartments as well as rooms for shorter stays. There are tours five days a week, and, in my experience, the docents do a wonderful job with a complex history featuring religious zeal, communal property and economic success, deep engagement with American culture, and, more scandalously, free love. Noyes did not believe in traditional marriage that joined two people for life. His intention was to establish heaven on earth: "In the kingdom of heaven, the institution of marriage which assigns the exclusive possession of one woman to one man, does not exist. Matt. 22: 23-30. 'In the resurrection they neither marry nor are given in marriage.'" Of course, his system of complex marriage was not as freewheeling as "free love" might imply. Couples needed approval from Noyes before consummating their attraction, and he discouraged them from becoming sexually exclusive.


Even in the wake of the intense revivalism of the Second Great Awakening, and evangelical encouragement of female religiosity and domesticity (however contradictory and unexpected the results), the Oneida Community was not alone in its critique of marriage.* In the First Annual Report, one of the first publications to announce the beliefs and practices of the Oneida Community, Noyes's criticism of marriage could have been voiced by any antebellum free lover, Fourierist, or "infidel": "The law of marriage 'worketh wrath.' 1. It provokes to secret adultery, actual or of the heart. 2. It ties together unmatched natures. 3. It sunders matched natures. 4. It gives to sexual appetite only a scanty and monotonous allowance, and so produces the natural vices of poverty, contraction of taste, and stinginess or jealousy. 5. It makes no provision for the sexual appetite at the very time when that appetite is strongest." Noyes's contribution was his extensive Biblical justification for free love, informed by his heretical belief in spiritual perfection. His twin goals were to "establish union with God" and to lay "the foundation of a new state of society, by developing the true theory of sexual morality."

Given the Oneida Community's location in the "Burned Over District," how did its neighbors respond? Lawrence Foster explores this problem in his edition of Free Love in Utopia by George Wallingford Noyes. Foster argues that complex marriage required some adjustment, so Noyes and the Oneida Community maintained "private marriage at first as a matter of expedience until individual exclusiveness could be voluntarily and completely broken down under proper oversight." Some of Noyes's first local converts were Henry Seymour and Tryphena Hubbard. To appease her parents, the young couple married, but Noyes spent much of the first years of the Oneida Community fending off her angry relatives.** After this experience, as Foster points out, Noyes backed away from local and national evangelism in favor of "a tightly knit, internally unified community." The community was already homogenous, which undoubtedly helped relations with local elites. The "First Annual Report" shows that its white membership hailed from New England or New York, and most were former Congregationalists, Methodists, and Presbyterians (with one Quaker for good measure). In addition, the Oneida Community engaged in some good PR by hosting separate "strawberry festivals" for their white and Native American neighbors.

One of the highlights on the Mansion House tour is a tiny bedroom, containing little more than a single bed, a bureau, and a chair, located off the main living area. It was here that a community member, with Noyes's permission, could express her/his non-exclusive love, attraction, and fellowship with a believer of the opposite sex. If you can't visit the Mansion House, I highly recommend perusing the digitized documents and photographs available through the Syracuse University Library.

Heath said…
Thanks for this post, Carol. I'm teaching a course on American Utopias in the fall, so if you have any other juicy tidbits/documents to share, don't hesitate to pass them along!
May 22, 2013 at 8:05 AM

Monica L. Mercado said…
Wonderful post, Carol - I hope to swing through Western NY during my summer research road trip. And Heath, I hope you'll post about your American Utopias course at some point - its a subject I've wanted to teach for a while!
May 22, 2013 at 10:09 AM

Tom Van Dyke said…
I'm always fascinated by he fascination with these historical dead ends, in this case a "community" that numbered only 300 at its max.

That it later mutated into a multinational silverware manufacturer, now, that's interesting.

Janine Giordano Drake said…
I used Lawrence Foster's _Religion, Family and Utopia_ in a course last Fall and it was probably the most popular and discussion-provoking reading in the whole course on religion and politics. It destabilizes the whole disjunction between second and third wave feminism.

As far as books for your course, Heath, I'd highly recommend Noyes' _History of American Socialism_. It's public domain, so free to download to a kindle or read online on google books. It shows not only the huge number of utopian communities, but also the huge number of people who believed in them, even if most were short lived. It also shows how many many people believed in this overlap between the Kingdom of God and cooperative ownership of property. I rely on it a great deal in my research.
May 22, 2013 at 9:02 PM