Skip to main content
Labels
Posted by Randall May 12, 2013

The historian Peggy Bedroth is the executive director of the Congregational Library in Boston, MA. Since her first book appeared 20 years ago, she has shaped the field of American religious history in profound ways.  Her insightful work on gender, childhood and family, and the cultures of 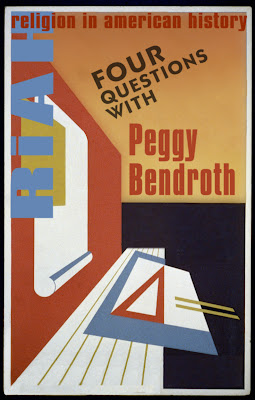 fundamentalism is as familiar to the grad student as it is to the established professor.  Among other things Bendroth has explored the day to day lives of believers and helped us understand how men and women, young and old, came to terms with the tumultuous 20th century.

I first encountered her excellent book Fundamentalism and Gender: 1875 to the Present (Yale University Press, 1993) in a graduate readings course with David Hackett at the University of Florida. Douglas Frank praised Fundamentalism and Gender in The Journal of Religion as "a remarkably stimulating read, offered in graceful, well-paced language by a generous spirit . . ." Agreed. In the years since Bendroth has written Fundamentalists and the City: Conflict and Division in Boston's Churches, 1885 to 1950 (Oxford University Press, 2005); Growing Up Protestant: Parents, Children and Mainline Churches (Rutgers University Press, 2002); and has edited several other volumes, including Women and Twentieth-Century Protestantism (Illinois 2002). Her most recent book is A School of the Church: Andover Newton across two Centuries (Eerdmans, 2008)

In this second installment of Four Questions, Peggy reflects on the twists and turns of her academic career and discusses her recent work.

Peggy Bendroth: You could say that I simply fell into it.  I majored in history as an undergraduate, and back in the heyday of the liberal arts (i.e., before college students worried about finding jobs), thought I’d love to study American intellectual history in graduate school.  For reasons that don’t make as much sense now as they did then I decided to take a side route into seminary to learn some theology, and ended up smitten with church history, and was then looking for grad school programs in American religion.

Of course, in other ways I was probably predestined.  I grew up in the Christian Reformed Church, a small Dutch Calvinist denomination and actually started learning theology from a very young age, memorizing the Heidelberg catechism, arguing with my Sunday school teachers, testing the patience of my fellow Calvinettes, and harassing my parents with complaints and questions.  The religion I grew up with was not about feelings—it was more like a life-long intellectual project.

I suppose what first interested me in religious history was the way it provided a context for my fairly narrow upbringing—it put us somewhere on a map, i.e., not the center—and helped me make personal and intellectual sense of what I’d grown up with.

Bendroth: In the early 1980s there were few places outside of theological seminaries to study American religion. I was not interested in spending any more time in one of those, so I went to work with Timothy Smith (Revivalism and Social Reform: American Protestantism on the Eve of the Civil War [1957]) in the 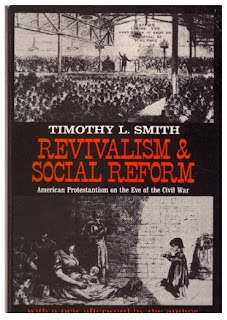 history department at Johns Hopkins. It was a challenge being both female and interested in religion in that very male and extremely secular setting.  It may seem surprising now, but the reigning assumption was that people who came to history with a “grid”—i.e., Marxists, women, or religious people—could not be objective like other scholars.  At least I was not a Marxist.

Sometime, somewhere after I left graduate school, we all became post-modernists.  By the time my children were old enough for me to begin writing again, I discovered that being female and interested in religion was not a drawback.  The new project was to understand religious belief and behavior in all its wild diversity. The experiences of previously unknown people, like fundamentalist women, were suddenly important, as windows into an American religious culture far more complex and diverse than most scholars had been willing to guess.

Bendroth: I learned to do research and write from a mentor who had never seen a footnote that was too long or too complicated. Tim Smith sent me right off into primary sources, armed with the understanding that if I immersed myself in them long enough they would begin to talk back, and the story began to become clear.  I encountered theory mostly in discussions of method, with the anthropologist Clifford Geertz and his concept of “thick description” front and center. As Hopkins had no department of religion, I received little direct training in religious theory.  I was in a history department after all, at a university founded on the importance of empirical research.

It is so easy for historians to fall in love with primary sources.  This is why most of us do what we do; we love treasure hunting through mazes of forgotten material in search of a narrative.  Too much theory, especially with dense, impenetrable prose, can feel like it’s slowing us down.

But over time I have learned the importance of going in with a map, knowing some of the markers I might encounter in those primary sources.  This meant figuring a lot of things out as I went along—it was kind of too late to go back to graduate school, so a friend and I agreed to read books about feminist or postmodern theory together, picking out ones that neither of us would have gotten through on our own, and hashing them out over many lunches of Indian food.  When I started my latest project, before I headed to the archives I spent my mornings reading big thick books on secularization, in short manageable chunks. I did not read line by line as if I was preparing for an exam—it felt more like marinating, mostly trying to see how another group of scholars talked about ideas that interested me. (Yes, this paragraph does contain a lot of food metaphors.)  Doing primary source research did not mean looking for material to fill in a theoretical grid but entering in at a deeper level than before, with a head full of good questions asked by thoughtful people.

Stephens: What projects are you working on now?
Bendroth: After many years of thinking about fundamentalists, I became interested in mainline and liberal Protestants.  I realized early on how much of their story has been filtered through the lens of their conservative evangelical critics—liberals were the ones who capitulated to modern culture (whatever that means), fading into the dull beige background.  My suspicion is that they probably represent a type of religious faith that we just haven’t defined very well—they may sound inarticulate or waffling, especially alongside their highly verbal fundamentalist and evangelical cousins, because they don’t have a good language for what they believe.  Until pretty recently they just haven’t had to explain themselves all that much.

Seeing that I now direct the Congregational Library in Boston, where my office is deep in the stacks, I am writing more specifically about Congregationalists.  This is not easy to do, I’ve found, since the historiography of all the mainline denominations drops off somewhere after the 1850s.  I’ve had to reconstruct a century or more of denominational history almost from scratch.

Right now I trying to finish a “history of history,” analyzing the ways my Congregationalists (cultural insiders all) imagined and used their past—in their case the Pilgrim and Puritan Fathers, as they called them. The sources are surprisingly rich: Congregationalists loved everything from turgid “historical discourses” and paeans to the “Pilgrim Fathers” to over-the-top pageants and re-enactments in full costume.  The primary question isn’t just how they used their past, though—it’s how the idea of the past itself was changing over time, becoming more linear, more abstract, and more alien to the present. If we think about secularization as the accumulation of many small changes over time, then all those discourses and pageants have a lot to say.  It’s been a lot of fun to coax the story out of the old books and archive boxes just outside my door—the Congregational Library has a solid but quirky collection and I’m always happy when other scholars come by to discover it too.
Email Post
Labels: American religions Congregationalism four questions with fundamentalism gender and religion liberal Protestantism mainline Protestantism peggy bendroth Pilgrims puritanism randall's posts revivalism