Historicizing Followers of the Proletarian Jesus 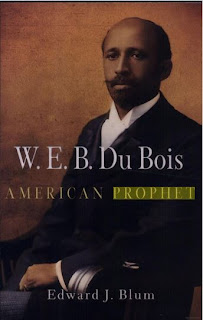 I recently finished Edward Blum’s 2007 W.E.B. DuBois: American Prophet, a terrifically written spiritual biography of W.E. B. DuBois. Blum follows DuBois’ writings on spirituality and racism over the duration of his life, and finds that at the center of DuBois’ diagnosis of “the problem” of 20th century oppression was the cartel of a domineering, white, self-aggrandizing, self-centered, and pro-capitalist Jesus. At times in DuBois’ life, especially the 1910 and 1920s, DuBois is vocal about being a follower of Christ. He even suggests that the Christian ethics he describes are central to renewing peaceful and just relations on earth. He dismissed many mainline white churches as complicit in the problems which Christ came to eradicate, but to him, as Blum put it, “true followers of Christ… stood against any racism, caste and creed” (111). Indeed, DuBois lived and worked within the Christian Socialist vision of the late nineteenth and early twentieth century, one which held closely to the person of Christ, but which critiqued the affiliation of Christianity with both capitalism and most denominational churches.

At other times, however, DuBois' was more reticent about public prayer, and publicly more distant from the rhetoric of Jesus. Through an examination of more and less public writings of DuBois, Blum shows that this reticence should not necessarily be read as a step away from Christian spirituality or belief. Rather, Blum shows, DuBois' early twentieth century faith in God to empower social and political reform did not waver. What changed was white America's vision of what Christianity was good for.

As Blum puts so well,

One of the reasons that DuBois sounded irreligious or antireligious during the 1940s and 1950s was that the Cold War and the Nuclear Age wrought a religious transformation on American culture. As Communism replaced fascism as America’s most pronounced opponent and as the nightmare of global destruction became a real possibility, a conservative, frightened religion became more prominent within the country. Evangelist Billy Graham aroused millions with scare tactics that individuals better ‘get right with God’ before the apocalypse, while religious and political leaders mobilized to demonize everything associated with Communism. Militarism to combat ‘atheistic’ Communism became a holy imperative...

What makes no sense, however, is that an America of bombs and threats and red-scare witch hunts has been painted religious, while DuBois’ endorsements of peace, disarmament, economic uplift, and human brotherhood have been declared antireligious. If we refuse to buy into the rhetoric of the Cold War that American capitalism was ordained by God and that Russian Communism was inspired by the devil, then our perception of DuBois becomes quite different. In DuBois’ mind, he never gave up on his religious battles. During these decades, he routinely wrote and spoke about faith. …. He pictured Communism as the social realization of Christianity and upheld a belief in the mystical power of Africa to save the modern world.  (182-183)

This is an extremely important point for twentieth century historians of both religion and the Left, and one which has been corroborated with a good deal of other evidence. Biographical projects on other Christian socialists and communists of DuBois’ era reveal very similar evidence of a persistent Christianity of a radical socialist Jesus, well into the twentieth century. In Jarod Roll and Erik Gellman’s Gospel of the Working Class, dual biographies of two preachers, one black, and one white, reveal the extent to which Southern religious leaders among the poor constantly navigated the overlap between organizing church services and leading these tenant farmers in their own social and economic liberation. Claude Williams, the black preacher they follow, believed that (as the authors summarize) "the gospel of Christ should overturn southern orthodoxies of gender, race, and class" (44). Williams organized for both the Church and the Social Gospel when they defended the person of Jesus to black communists. Williams was part of the Southern Tenant Farmers' Union, where he defended both Jesus and economic justice passionately. Owen Whitfield, a white preacher who shared politics and faith with Williams, worked closely with Williams at their joint religious and labor undertaking, The People's Institute for the Applied Religion. This institute later became a springboard for organizing the CIO in the 1930s. 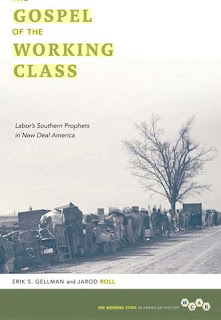 We now have a traceable and consistent thread of socialist and communist Christianity in the United States in the twentieth century. We know from Gellman and Roll that a vibrant socialist/ Black radical/ working class Christianity was present in the Southern Tenant Farmers' Union and carried on within Southern black and white churches well into the twentieth centuries. Both Alison Greene and Kenneth Fones-Wolf's work on working class Christianity in the Depression South confirms this further. We know from Jacob Dorn and Kathryn Oberdeck and Steven Rosswurm that this working class Christianity was alive within city centers of New England and the midwest throughout the early to mid twentieth century. We know from my work that discussions of a proletarian Jesus filled socialist newspapers, was a main topic of discussion within Socialist Party meetings, and became the obsession of Protestant Social Gospel leaders in the Federal Council of Churches.

But despite all this evidence, the field still has no term to coherently describe this consistent and traceable lineage of "people's Christianity" in the US. Those of us in the field know what Blum describes above--that this faith in the proletarian Jesus was not just rhetoric; it involved devotion to Christ. Nevertheless, this people's Christianity was never been entirely comfortable with institutions called churches.

At times in US History, we find these working class Christians within revivals and even churches, and at other times they worship within the STFU, labor unions, Labor Temples, and even the Socialist Party. They have no single theology, but they do have much in common theologically (something which Dan McKanan has begun to investigate). In many respects, our American literature has done a better job archiving them than our history. They are front and center in Upton Sinclair's They Call Me Carpenter and Steinbeck's The Grapes of Wrath. Followers of the proletarian Jesus have usually preferred the radicalism of Jesus' ministry to that of the Law or the atonement, but they have also been more comfortable tolerating personal crises of faith than most of their neighboring working class Christian traditions.

So then, why do we have no term for this proletarian Christianity in the US? I would love to hear what you think. My guess is that many historians are still not entirely convinced that Christian socialists and communists were serious about being Christians. This is made complicated by the fact that many of these socialists and communists were honest about wavering on their "personal relationship" with Jesus throughout their lives.

Yet, as most of us know, a "personal relationship with Jesus" is a biased and historically specific term which is only central to some American Christianities. This was never the only, or even the most important, qualification for membership within American churches. Moreover, as Blum put it, "endorsements of peace, disarmament, economic uplift, and human brotherhood" only sound worldly to Americans who have accepted Cold War narratives on the utility of faith.

I hope that in coming years, we as a field become more comfortable unequivocally using the term "Christian" to describe these self-identified believers in Jesus, the proletarian radical. Doing so not only makes a statement challenging the contemporary boundaries between Christianity and Left-leaning politics. More importantly, it provides a more fair and meaningful context within which to understand a good deal of  the"plebeians" of American religious history.
Email Post
Labels: Du Bois and religion DuBois janine's posts religion and class

Do you think that socialist and communist Christians, or other followers of the proletarian Jesus, have simply been lumped together by historians under the "social gospel" label? If so, do you think that's reasonable or fair?
April 10, 2013 at 5:13 AM

Janine Giordano Drake said…
Good question! I think you are right that some historians have used this Social Gospel label as a catch-all term here. Off the top of my head, I believe Jean Miller Schmidt does in _Souls or the Social Order_ (1991). But, I argue that this term elides too many differences among leaders in social reform. At the most basic level, some people were interested in church -led reform (esp. church leaders) and others were interested in a range of socialist ideas from government management and regulation of utilities to syndicalism (union owned and managed factories) --and these very different visions of the S.G. actually competed more than they agreed. Most importantly, religious leaders most often did not consider followers of the proletarian Jesus to be Christians if they didn't profess Christ and go to church. Catholic and Protestant leaders were on the whole very afraid of socialists/ communists, and considered them atheist by their very philosophy.
April 10, 2013 at 5:54 AM

I think your post and work points to a number of interesting historiographical questions. For instance, can we use a term like "social Christianity" as a broad descriptor for a variety of expressions--labor gospel, Christian interracialism, Catholic social teaching, etc.--and then use "social gospel" in a more limited sense? Of course, how would we limit "social gospel," then?
April 10, 2013 at 6:47 AM

Janine Giordano Drake said…
Mark, yes, great questions. This is a question I've definitely run against before. I believe it's one that Heath Carter (another blogger here) and I have discussed, I think even at our last conference panel together. I believe we'd each have a different response to the question. It's a good question.

My diss. discusses how specifically I'd limit the term Social Gospel and why. I'd love to share it with you. I will deposit it by this June or July.
April 10, 2013 at 8:01 AM

Tom Van Dyke said…
My diss. discusses how specifically I'd limit the term Social Gospel and why. I'd love to share it with you. I will deposit it by this June or July.

Capitalizing "Gospel" is a good start. Optional would be [S]ocial, in fact, perhaps small "s" would set off the "G" even better.

Another Blum book, I see.

5-star rating. This guy Blum is gonna bust my budget.

"This book is a marvelous probing into the unknown and unexplored dimension of the great W. E. B. Du Bois's life and work: his self-styled religious and spiritual temperament. Edward Blum is to be congratulated for this grand contribution!"—Cornel West, Princeton University

"Blum's work powerfully evokes both the spirit and substance of Du Bois's moral vision in ways that will greatly benefit students and scholars of American religious and intellectual history for years to come."—Journal of American History

"From comprehensive and original archival research, Blum reveals a Du Bois who from the beginning to the end of his career was obsessed with religion, its rhetoric, typologies, practices, and moral virtues. This book—really, an intervention—is long overdue."—Callaloo

"A greater tribute to the man cannot be found, even in the works of the most seasoned Du Bois scholars."—Church History