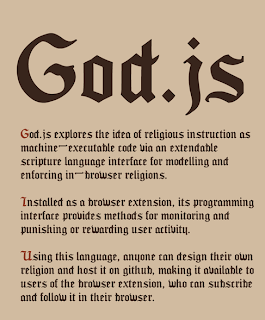 Last month a group of hackers and digital artists gathered in New York’s most ironic borough for Brooklyn’s annual Art Hack Day. The end result was God.js, a JavaScript based program that tacks onto your preferred web browser and functions like, well, God. Once installed, God.js’s programming interface allows the user to input a religious creed (or is it religious code?) for internet usage such as “Thou shalt not ‘poke’ thy brother on Facebook,” or “Thou shalt not have no gods above the Religion in American History blog.” Break these commandments, and you face the wrath of God.js. On Facebook too much? God.js plagues your screen with boils, frogs, or flies. Checking ESPN.com more than this fine blog? Your web browser crashes as God.js opens tab after tab of GIF-driven hellfire. Users are invited to code their own “scripture language interface” and share it on GitHub, allowing for the emergence of new browser-based religions as followers try to decipher your command(ments).

While this all may seem like one big crass practical joke, God.js’s creators claim to be trading in much deeper stuff. As they note in the project’s description, they designed God.js as a way “to explore the idea of religious instruction as machine.” Where others may look upon God.js’s emphases on rules and discipline and exclaim “That’s not what religion is!” God.js playfully asks “Why not?” American evangelicalism, after all, is no stranger to web filters that block impious material and exact judgment by emailing peers. But beyond such mischievous juxtaposition, God.js’s collaborative, yet autonomous, nature pushes its interpretive reach even further. As a semi-sovereign computer program vested with a kind of latent agency by the individuals who create, follow, install, contribute to, obey, discuss, and even uninstall this patchwork of JavaScript, God.js’s “relationship” with its users is not unlike the sacred figures and holy beings that inhabit the lives of more traditionally religious communities.

This ability to mock, explore, and interrogate the category of “religion” is, I think, God.js’s most intriguing contribution. It is also the central question of the field of religious studies. But where God.js has been the subject of write-ups by publications as varied as The Verge, the vast majority of religious studies scholarship typically does not crack broader public discourses. In my previous post, I suggested that there are important scholarly connections between the fields of public history and religious studies that have yet to be explored. Collective memory and public commemoration have been driving forces of American religious history, I argued. But here, I’d like to focus on how there are also important professional connections between the work of public history and the field of religious studies. For in this climate of austerity, where the humanities are in crisis and the relevance of the liberal arts is openly questioned, it is incumbent upon scholars to make public engagement a vital component of their academic profile. And the web, I think, provides one of the most exciting outlets to realize this mission.

American religious history, of course, is no stranger to the web. John Corrigan and Tracy Leavelle’s French and Spanish Missions of North America project (which had the help of RiAH’s own Art Remillard) and the University of Virginia’s Institute for Advanced Technology in the Humanities’ Salem Witchcraft project were some of the first digital history projects published. The massive transcription projects of noted religious figures such as Jonathan Edwards and Joseph Smith have also migrated online, providing searchable databases of key primary sources. And, of course, there is Paul Harvey’s own pioneering work in fashioning this blog as a space for public discussion of serious academic work. But in the rapidly emerging field of the digital humanities, the study of religion is distressingly absent. While a number of projects currently flourish that mine the topics of Civil War newspapers, recreate the landscape of Harlem during the Great Migration, or visualize Francis Bacon’s centrality to the early modern scientific world, projects that make religion or American religious history as their primary object of study are few and far between. (The latter project, titled “Six Degrees of Francis Bacon,” wins the award for best DH title in the world.)

The lack of digital humanities research within religious history or religious studies is unfortunate in part because of the scholarly and interpretive possibilities DH can open for the field. Over at the Juvenile Instructor, Tona Hangen has dreamed up an entire list of digital Mormon studies projects, from topic modeling Mormon diaries to analyzing the networks of Mormon publishers. One could easily export her ideas to other religions. How great would it be to visualize the networks of liberal and orthodox Protestant theologians over a period of time to see just how final the Fundamentalist-Modernist controversy was? Or make a deep map of an urban Archdiocese to explore the complexity of American Catholicism?

The seemingly endless opportunities for digital religious studies is one of the main reasons I’m so excited to be organizing a THATCamp for the November meeting of the American Academy of Religion in Baltimore. But the real strength of these digital projects, I think, is the opportunity they provide for an even broader public engagement. The inextricably public presence of such born-digital projects provides an unprecedented opportunity to connect serious academic research with the widest possible audience in ways that neither betray the integrity of scholarship nor belittle the public’s interest. Take, for example, Lincoln Mullen and Erin Bartram’s recently launched American Converts Database. The project is a kind of open research repository that allows two graduate students working on the history of religious conversions to collect and collate converts in nineteenth century America. But the stories and documents collected there will also provide an easily accessible source base for anyone to explore the fluidity and dynamism of American religious history.

This kind of public connection—and contribution—is vital in age in which newspapers openly flaunt the supposed uselessness of a degree in religious studies and state legislatures consider shuttering humanities departments. But it is also a mutually beneficial endeavor.

So what about everyone else? What other outlets do you see that could contribute to a publicly engaged religious studies.
Email Post
Labels: chris cantwell's posts digital humanities

Paul Harvey said…
I was WONDERING why my browser kept crashing with screen after screen of GIF-driven hellfire. Now I know why! Good thing March Madness is coming to an end.
April 8, 2013 at 2:29 PM

Anonymous said…
@pj_webster Many thanks for this Chris. It connects I think to a similar lack of engagement with open access publishing in religious studies.
http://oaopenaccess.wordpress.com/2013/03/28/conversation-with-two-religious-studies-scholars-on-committee-at-open-library-of-humanities/
April 10, 2013 at 5:51 AM