An Olympics of Intellectual Take-downs 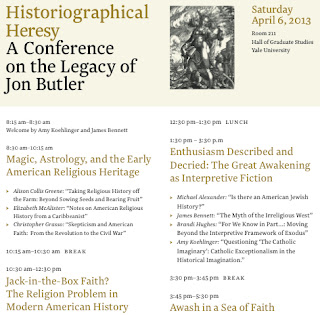 Not typically in the right place at the right time, I was fortunate to be both a couple weeks ago when Jon Butler was officially feted/roasted out of his longstanding professional roost at Yale. (RiAH readers were alerted to the day-long conference here at the beginning of March.)

Planners Amy Koehlinger, James Bennett, and Katie Lofton spearheaded a consistently mind-expanding day of panels packed with former Butler students. Representing different decades and fields, professors at all ranks were flown in from around the country and asked to produce a paper in the heretical Butler mode, puncturing the conventional orthodoxy of their subfield. The rule of thumb for presenters, as Molly Worthen pointed out in her paper, was WWJD: What Would Jon Do? Or: Be your own devil's advocate! What ensued was, in the words of Elizabeth McAliser, "the Olympics of intellectual take-downs."

After dinner Butler was roasted by New York Times "Beliefs" columnist Mark Oppenheimer, who donned a white beard and cardigan for an excursion through "Mr. Butler's Neighborhood," nicely capturing Butler's elfish mannerisms. One of Butler's sons spoke movingly of his father's faithful attendance at his many high school and college basketball games. Even as dean of the Graduate School, Butler apparently left his work-world behind when he came home and joined the family for dinner.
Email Post
Labels: Christian scholarship conference recap graduate school great awakening historians of religion historiography jon butler panels religion and american culture religion and scholarship stowe's posts