Christianity and the "Specter of Capitalism" 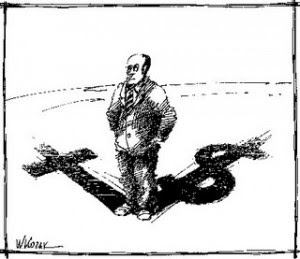 A noteworthy piece in the April 6th edition of the New York Times trumpeted a new twist in the field of American history, declaring, "A specter is haunting university history departments: the specter of capitalism." It went on to say, "After decades of 'history from below,' focusing on women, minorities and other marginalized people seizing their destiny, a new generation of scholars is increasingly turning to what, strangely, risked becoming the most marginalized group of all: the bosses, bankers, and brokers who run the economy."

1) The new history of capitalism is, in fact, on the rise.

2) This emerging field will not supplant "history from below."  A central task ahead for both historians of capitalism and social historians is to find ways to weave their respective stories and perspectives together.

This second point raises interesting questions and problems for those of us who are working particularly on the relationship between Christianity and capitalism in modern American history.  While the Times article's only nod to religion was a mention of Bethany Moreton's work on Wal-Mart, the reality is that this is now a thriving subfield, as was clear at the annual meeting of the Organization of American Historians in San Francisco this past weekend.

I was able to make the first part of a panel entitled "America's War of Religion: The Cold War on the Home Front," where Princeton's Kevin Kruse presented from his forthcoming book on the relationship between the corporate and Christian elites in 1950s America.  Kruse's paper argued that the rise of the "one nation under God" paradigm was motivated less by a Cold War anti-Soviet agenda than it was by a backlash against the New Deal.  During this period corporate executives like J. Howard Pew - on the lookout for ways to legitimize their business plan for America - forged new partnerships with the Christian clergy.  Big business underwrote the media empire of Los Angeles Rev. James Fifield, for example, who went on to become an influential proponent of Christian libertarianism.  By the time President Eisenhower was presiding over the first national prayer breakfast, the foundations of the Reagan Revolution - still decades in the future - were already being laid.

Kruse and Moreton are not alone in their interest in the relationship between Christianity and corporate America; Darren Dochuk, Tim Gloege, Darren Grem, and a number of other scholars are also working at this nexus.

At the same time, as Janine Giordano Drake documented in her excellent post last week, another cohort is currently hard at work mapping the contours of working-class Christianities in the American past.  At OAH, some of us - including Drake, Jarod Roll, Ed Blum, and I - came together on a roundtable to discuss the enduring significance of Herbert Gutman's groundbreaking 1966 article, "Protestantism and the American Labor Movement."  One of the most important questions to emerge out of the conversation was this: how does the work being done on Christianity and the working classes fit with that on Christianity and corporate America?

This question was not resolved in our panel and I cannot begin to do it justice here.  But if we are going to understand more clearly the relationship between Christianity and capitalism in modern America, we must work toward a synthesis of these two emerging literatures.  Periodization might prove something of an obstacle here.  Much of the work on the labor side is concentrated in the period between the Civil War and WWII, while the majority on the corporate angle falls in the post-'45 era.  There are certainly a number of exceptions to this rule but both literatures would, in general, benefit from expanded chronological scope.  That being said, it is not too soon to begin the synthetic work that lies ahead.  Surely there are connections to be made at the level of persons, institutions, ideologies, policies, and more.  Let's make them.
Email Post
Labels: capitalism conference recap Heath's posts religion and class religion and economics

Janine Giordano Drake said…
Heath, you make such a good point here about the "problem" of different periodizations of current research. I agree, of course, that this is just a temporary problem and that further research should (will) bring these current regions of exploration together.

But, I also wonder if the difference in current approach also indicates a more significant difference in the "problems" each of us see as worth unraveling. To what extent is this current version of evangelical cheering for "capitalism" a post FDR phenomenon? Or, to what extent ought it be understood as another version of a very long love affair between the two (a relationship which really needs a longer purview to understand)?

Also, I think Gutman was right that there is still a difference between following the paper trail of influential pastors and evangelists and following that of the workers within their work communities. I wonder how Jarod's newest work on working class Christianity in the South will compare with Dochuk's examinations of influential proto-fundamentalist and fundamentalist preachers there. When did pastors become such economic authorities (as they were in the 1930s)? Surely this was not always the case, (right)?

I hope that further examinations of "capitalism" and "the working class" keep on going and that they both stay near to the field of "Labor and Working Class History." I rely on both of these approaches in teaching and lecturing. One book cannot necessarily do both of these things, but the field really has to do both so that we can keep our students aware of how capitalism works and also how important workers are to its function through their cooperation and resistance.

rjc said…
Excellent comments, Heath. I look forward to an abundant field of new work exploring the overwhelming effects that capitalism has had on all aspects of religious practice and imagination.
April 17, 2013 at 8:31 AM

One of the major blindspots of these new lines of research, however, is that within the new work on religion and capitalism (corporate or otherwise), there is an assumption that religion=Protestant and, most of the time, conservative Protestant at that. More contextualization -- especially mapping the religious backgrounds of business owners and leaders would be useful, especially in showing whether corporate Protestantism/Christianity was niche or typical. Did Catholic business leaders work from the same templates? What about Jewish business owners, from investment banking founders to department store magnates and general store owners? In more recent times, what about Asian Christian or Buddhist or Hindu corporate leadership? How has the influx of workers from East and South Asia in the tech fields altered (the) business (of) religion?
April 17, 2013 at 12:34 PM

Heath said…
Just getting to these comments now.

Janine, my sense from my own research is that evangelical-corporate partnerships extend back at least to the years immediately following the Civil War. This was certainly the case in Chicago. I would agree with you that investigations into the lives of ministers and those into the lives of ordinary workers/laypersons might yield very different stories. Again, this has definitely proved true in my own research.

RYS, I think you make apt points here and ask some very intriguing questions as well. On the corporate side of things, the focus on Protestants may have something to do with an attempt to follow the money (and power), though I'll let those who are writing those books speak for themselves.

Tom Van Dyke said…
"Capitalism" is such a problematic and usually unhelpful term. On one philosophy blog I spent years with [actually an old fashioned "list" as in "listserv"] some very sharp philosophy types went 'round endlessly on what it even is.

Such a waste of perfectly good brainpower.

To the leftperson, capitalism's a self-evidently bad thing, the semi-institutionalized exploitation of labor by capital. The only remedy is explicitly setting our political institutions to reverse the structural imbalance.

However, from POV of the "Puritan/Protestant work ethic" postulated by Max Weber [if not Ben Franklin] to Adam Smith's "invisible hand" [tempered to be sure by a Christian charity/fellow-feeling empathy], capitalism is a synonym for free enterprise and free markets that produce plenty for all.

Be fruitful and multiply.

One of the unnoticed victories of the David Barton-Peter Marshall Great Texas Textbook Massacre was the implantation of "free enterprise" as a self-evident good.

IIRC, in place of the previous curriculum's use of "capitalism." Capitalism has become a morally ambiguous term if not an outright pejorative, but what's not to like about "free enterprise?"

There is a manifest tension [as noted by historian/demographer Colin McEvedy] that the Southern European Roman Catholic countries gravitated to more communitarian economic models whereas the Reformation countries were far more entrepreneurial. No coincidence, then, that the sick economies of Europe today ["PIGS"] would be the Catholic ones.

So I'm looking forward to the smoking guns of this interesting thesis. I have no problem with a historical Catholic disposition toward communitarianism over free enterprise, but the Protestant component of modern American communitarianism--leftism if you will--could just as easily be attributed to the convergence of mainline Protestantism with secular modernity rather than to a "social Gospel" politics ala Catholic Worker.

But that's just a guess.