Traveling Through the Lost Land: Latina Pentecostal Women and Labor History in Texas 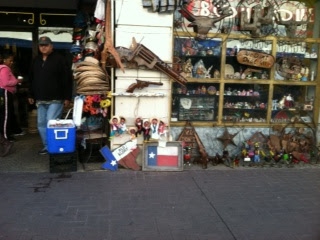 A few weeks ago, I continued my farewell tour through Texas by stopping in San Antonio. I will spare you the deconstruction of the Alamo--that is really beating a dead horse.

One striking image in the midst of my Alamo visit was memorable enough to include here. In between the choral singing of the "Yellow Rose of Texas," a procession of military guard, and a group rendition of "Deep in the Heart of Texas," I walked across the street to one of the vendor shops to see if there was a trinket worth buying. Beneath a wood carving of a six-shooter, were wooden puppets of Mexicans--complete with sombreros and zarapes.

I did not have the heart to buy it, but that product placement did get me to thinking about Mexicanos in Texas and those of us who come from that hearty stock.  The fact that we lie underneath a gun and above replicas of the state of Texas-with strings attached so that we can be easily swayed in either direction--for amusement or for expediency, was about all I needed to see of the Alamo.  As a religious historian though, that juxtaposition did get my mind racing, so here is a day in the life of my mind--racing through 75 years of Texas history and of course, with a few religious folks thrown in for good measure.

Unlike the Alamo, the 1938 Pecan Shellers Strike, lead by "La Pasioneria," Emma Tenayuca, a Catholic communist leader of the Workers Alliance, whose tireless advocacy on behalf of Latinos/as in San Antonio has been largely forgotten.  Against Tenayuca and the 12,000 mostly Latina workers who went on strike was the entrenched and powerful Texas Pecan Shelling Company, the National Catholic Welfare Council, and the Archdiocese of San Antonio, who found Tenayuca's communist ties incompatible with "the morals of Catholic workers."  What they did not know, was somewhere in that workforce of Latina women, who engaged in the piece work of shelling pecans, breathing in the fine brown dust that exacerbated respiratory conditions such as the ever present tuberculosis, and joined in the strike, were Latina Pentecostal women, whose conflicts about their participation in the strike, led them to ask their influential pastoral leader, Henry C. Ball, what he thought about the strike.

Henry C. Ball was an Assemblies of God missionary to Mexico before settling in San Antonio around the 1920s to run the church's missions to Mexicans on the borderlands. Ball's words to his Latina congregants are evocative of not only the intrinsic problem with much of U.S. Pentecostalism, but as was the case in 1938, a problem shared by the Catholic Church of San Antonio. Neither had theologies suited for systemic social action. Ball, seemingly unaware that the leaders of the strike were communists, conceded that the pecan shellers were doing hard work that went uncompensated, no matter, offered Ball, they had the joy of the Lord in their hearts and their reward would come in heaven. He assured his Latina followers that Jesus would come soon. The early years of the Assemblies were marked by the immediacy of the eschaton, making involvement in politics unnecessary. The Catholic Church, unburdened by the premillennial schema for centuries, reverted to the "contamination" thesis--simply working alongside communists led to moral corruption.

What the Catholic Church of 1930s San Antonio failed to see was that Tenayuca's moral imperative to better the lives of pecan shellers was based on her Catholicism--communism was a vehicle to live out deeply held beliefs about social justice.  Henry C. Ball on the other hand would not only have had difficulty with Tenayuca's communism, which would have made her an object of scorn, but her Catholicism, which would have made her a subject of conversion. It took at least another generation for much of Latino/a Catholicism to see its way towards an embrace of an active social justice agenda--but not before Tenayuca was exiled from San Antonio to California.  Tenayuca's exile was hastened by the KKK disrupting a strike meeting and threatening strikers with violence if they stayed in San Antonio. Tenayuca earned a college degree in San Francisco, and completed her studies at Our Lake of the Lake college in San Antonio, and became a teacher in the local school district. Tenayuca died in 1999, and is now an iconic figure in Texas women's history.

The Latina Pentecostal women who went on strike at Tenayuca's urging remain enigmatic--their names are not mentioned by Henry C. Ball and they are not identified as Pentecostal in any of the existing literature on the strike. Their activism resonates with at least part of early Pentecostalism's impetus toward social justice:  the racial egalitarianism of William Seymour, and pacifism advocated by many denominations. This brand of Pentecostalism never resonated with Henry C. Ball.  Ball witnessed the treatment of Mexicanos being sprayed and decontaminated on a regular basis while he was allowed to cross over the border without having to undergo such indignity--Ball said nothing in his missionary missives to the Assemblies of God about the practice, and if he did, one doubts any prescriptive reckoning with that practice. Ball shares much in common with his spiritual descendants who do not train their theological lenses to  see injustice as something to fight--but as a temporal impediment awaiting an ethereal pay off.  For activist Catholic Latinas like Tenayuca, her answer was simple "..you see a problem and if you have any morality, you take up the issue."

I looked up Tenayuca's quote as I ate at a German deli in business in San Antonio since 1919, and wondered what, if anything, she said to her Latina Pentecostal compañeras, who were not supported by their pastor, to keep them in the struggle. More to my imagination, I wonder what she'd have to say about those puppets across the street from the Alamo--where the triumph of the Republic obscures our lost lands.
Email Post
Labels: arlene's posts pentecostalism religion and economics religion and labor religion and radicalism southwest