Howdy neighbor.  The Lord Bless you.  I'm in town to give the devil two black eyes. 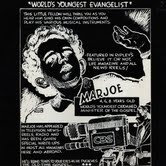 It takes me a while to catch up on the good stuff I see on this blog, and I finally took Randall Stephens’s advice and watched the documentary Marjoe, which follows the last year of evangelist Marjoe Gortner's career.  Filmed in 1971, the documentary, directed by Sarah Kernochan and Howard Smith, won an Academy Award for best documentary film in 1972.  It was rereleased in 2006 once Kernochan bought the rights to the film from a company in receivership.  (She recounts this interesting story in her own blog.)  My memory of Gortner was as the lion tamer in the Circus of the Stars in the 1980s; although, I will admit it took me a while to figure this out.  He looked so familiar I had to figure out how I knew him, and I knew it wasn't from a revival in the early 1970s.

The film is really worth viewing, but I must admit that I finished watching this film with a feeling of ambivalence.  The conceit of the documentary is that Marjoe is a fraud by his own admission.  His early career began around age four, after he was baptized in the Holy Spirit.  His father, in one scene in the documentary, recounts that he began to speak in heavenly languages while taking a bath.  Gortner recounts at one tent revival that God called him to preach as a four year young boy.  But what can I do Lord, I am just a boy?  He could preach even as a five year old.  He could become the world’s youngest evangelist.

At age five, Marjoe memorized the entire Episcopal wedding service and married a couple in California.  Between ages six and eight, we see film clips of him in a white suit preaching as if he were Billy Sunday.  These sermons are really fun to hear.   All I could think was this boy is a Holy Ghost Wunderkind. 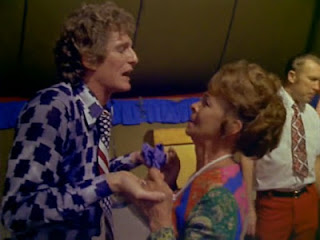 But the viewer is not allowed to become too impressed.  Gortner tells the camera that he "never thought he was a miracle."   He explains that his mother forced him to memorize his routines and physically abused him if he made mistakes.  His parents trained him to use hand motions and body language as he preached, and his mother even taught him code phrases to cue him how to handle the audience, especially when they were ripe to give the largest offering possible.  By his own estimation his parents raked in several millions of dollars during his ten years as a child evangelist.  Marjoe is back preaching after a hiatus, not because he believes his own message but because he needs to earn a living.

In the beginning of the documentary, Gortner explains to the film crew how to blend in during the revival rather than be the object of their witnessing.  "Cut the locks."  "No smoking."  "Keep it in your pants ... I never take out a girl from a church.”  (He apparently saved that for airline stewardesses).   And if anyone should ask a crewmember whether he or she was saved, Gortner counsels them to reply confidently that “I am washed in the same blood as you.”

The question the crew asks him in the beginning of the film what will happen when "they" find out?  The camera becomes his confessional: "Well, I hope that they will see it's not necessary to look to some person to, like, jerk you off ... to put your belief in."

The viewer is left haunted by the crew’s question throughout the rest of the film.  We know good and well that Gortner is a fraud—the crew captures an appalling scene of Marjoe singing “Jesus is so good to me,” while counting the evening’s earnings on his hotel bed.  Like a magician, who has broken his professional code, he exposes the tricks of the trade.  The evangelists “that are successful are business men, like Madison Avenue P.R. men”—and women, the film makes quite clear.  Sister Taylor exhorts worshippers to “prove God” by giving money to evangelists.  Another revivalist preaches that success and Cadillacs are a proof of God’s blessing and approval.  A Dallas minister and family dine on steak and talk about their land holdings in Brazil.  Others are masters of print and radio.  Marjoe recalls finding his gimmick: a sweat-activated ink that he painted on his forehead in the shape of a cross to astound his audience while he preached. 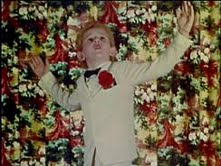 What will happen when "they" find out?  Them.  I never quite got past these people who inhabit the background of the film.   The film was about Marjoe, but the film crew and Gortner are clearly haunted by them too.  They are unnamed.   They paradoxically preach and speak of the Spirit and spiritual things, but respond with such religious physicality.  They pray for a touch of the divine grace.  They dance with joy.  They fall slain in the Spirit.  Yet their faith seems to transcend other things so physical.  Their services are notably multiethnic, and gender does not seem to be barrier for ministries left only to men in other churches.  They are portrayed as religious anachronisms, yet they seem, in other ways so ahead of their time, even compared with more theologically liberal denominations.  Marjoe reveals the power they have over him: “If I was going to pick a religion, of Christian types of religion, if I had to go into one of them … thank God I don’t have to … I’d pick the Pentecostal faith because the music is just great and the people are interesting.  They’re kind of weird, but it’s OK.” He acts like he is not already gone into a religion.  He claims he likes their faith, but deplores their hell.  Even so, Gortner self-reflectively tells the camera, “Religion is a drug.  Can God deliver a religion addict?”  Who has bewitched whom?

But Marjoe, in his own mind, defrauds them anyway.  The film-makers win an Academy Award using them as well.   “I sort of like to think that I’m bad but not evil,” Gortner confesses.  “I am a hype, but not a bad hype.”  Perhaps this sums up the film best.  There are really interesting things happening in Marjoe, but often the most interesting things are often underneath, beside, and despite the hype of its protagonist.

David Stowe said…
Nice interpretation of this film. I was thrilled to discover Marjoe in time to include a discussion of it alongside Superstar, Godspell, and Johnny Cash's Gospel Road in my book No Sympathy for the Devil. Definitely an interesting moment in the overlap of American Christianity and the movies.
March 16, 2013 at 7:15 AM

Michael Utzinger said…
Thanks, David. A remarkable documentary to say the least. I have your book in my queue, and I am looking forward to reading it--Marjoe and all.
March 20, 2013 at 3:54 PM