Religion in the PNW: Visiting the Islamic Center of Tacoma

During my first year at PLU, I had to design four new courses. The first three – American Church History, Religion & Politics in the U.S., and Religion and Gender in American History – were in my wheelhouse. But the last one, Islam in America, kept me up at nights. I had scant training in the subject, and I cast about widely for books and other resources that would get me through the semester. (Some of the best books to teach, for those of you who are interested: Edward Curtis’s Columbia Sourcebook of Muslims in the United States, Kambiz GhaneaBassiri’s History of Islam in America, and the always-reliable Autobiography of Malcolm X. This semester I’ve added a novel, The Submission, by Amy Waldman, which I first learned about from Paul’s 2011 blog post.) A grad school friend, UT-Austin professor Chad Seales, sent me his (very good) syllabus and a couple assignment ideas. Using these and other resources I made it through the semester relatively unscathed. Actually, I had a lot of fun teaching the course. It’s a good thing, too, since Islam in America is part of my regular rotation. 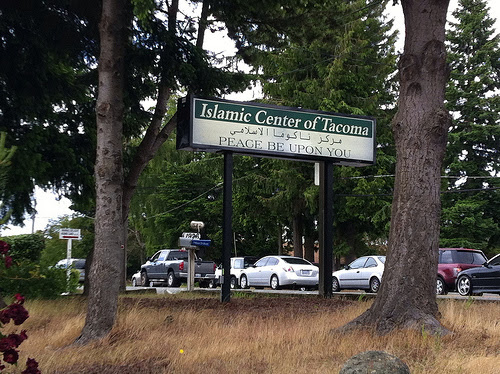 One thing I didn’t ask students to do last spring was to visit a mosque. I’ve added that requirement to the course this spring, and students will begin their visits this Friday. I made my first trip to the Islamic Center of Tacoma for Jumu’ah prayers five days ago, on the lookout both for ways I could prepare my students and, for the purposes of this blog series, for anything distinctively “northwest” about the mosque. But aside from mosque parking lot’s view of the Puget Sound, there was little indication that we were in the northwest. Once I stepped inside, I could have been anywhere. The racial and ethnic diversity of mosques is remarkable, especially for an observer accustomed to racially homogenous churches. This week’s service featured two messages—one in Arabic and one in English. Of the men who wore regionally distinctive clothing, I saw a few long robes, plenty of fleece jackets, and an unsettling number of New York Yankees caps. If a member of the Muslim hikers association was there, I didn’t meet him.

Upon further reflection, the mosque’s ambivalent geographical identity began to make sense. In the northwest, I’ve seen small Lutheran sanctuaries that use clear glass to frame views of fir trees and mega-churches where the artisanal coffee and preponderance of beards and tattoos never let you forget where you are. But for a religious community with a sizeable proportion of immigrants, it makes sense that the focus is less on where you are than on who you are. The speaker at Friday’s service spent a good five minutes chastising the worshipers for not attending midweek and weekend services as faithfully as they did on Fridays. The message reflected concern about the ways a foreign culture might overwhelm faithfulness – perhaps most especially out here in the “none zone.”

Curtis J. Evans said…
Although I have never used it for a course, I have found "American Dervish" (2012) by Ayad Ahktar to be a very moving fictional account of Islam in America through the eyes of a young Pakistani-American boy. I would consider using it if I were to teach a course such as the one you describe.
March 13, 2013 at 5:04 PM

Paul Harvey said…
loving this religion in the PNW series Seth, thanks. look forward to next month.
March 13, 2013 at 6:34 PM