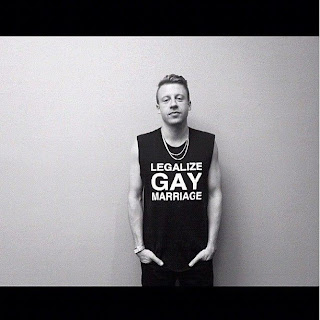 I have a confession: if I have to talk or read about the pope one more time, my head is going to explode. Such is the risk for those who teach and write about the Catholic Church. I guess I asked for it.

So on this Palm Sunday, I'm going to take Julie Byrne's suggestion that we think less about the pope and more about the people. After all, "the roil of Catholic opinion on the ground is the real show."

Macklemore, famous for popping tags, grew up in a Catholic family in Seattle. Last year, he released the single "Same Love" during the campaign to legalize same-sex marriage in the state of Washington. Macklemore's outspoken support for same-sex marriage stems from his Catholic childhood. He talks about it with Kurt Andersen on the radio show Studio 360.

Give it a listen:

And watch the video:

Judy said…
It's funny how all you liberals only attack Catholics but leave Muslims out of this (even though they have the same beliefs as Catholics). Is it because if you attack Muslims for "hating gays", you're afraid of getting blown up and you know that by attacking Catholics, that they'll be too forgiving to attack you. Shame on Catholics, whom like Muslims and the rest of the world that's not Westernized/capitalized for condemning homosexuality. Shame on Catholics for proclaiming that Andrea Friedman and her Down Syndrome ilk are human beings. Not disabled. Not burdens. Not pieces of shit. Shame on Catholics for accepting people who truly are "born different" and seeing them as more worthier of life than savage dogs (the opposite of what Adolf Hitler believed about Down Syndrome and dogs). Shame on Liberals who tell me to be "accepting" of people who are born different and then spitting in the face of someone who truly is "born different" calling that person a "retard." Well, now that I've finished ranting, and have already gone to Mass, I think I'm going to bring some muffins over to that gay couple across the street. They've invited me over for coffee. You see? We can disagree and still be friends. Because real Catholics love everyone!
March 30, 2014 at 12:28 PM