How to Write an Op-Ed

Why are Ops Ed? Or more to the point, where do they come from? Not so long ago an unexpected opportunity fell into my lap and I became the author of one. In the process I learned some unexpected things about how Op-Eds come to be and the many steps they take to achieve their final form. 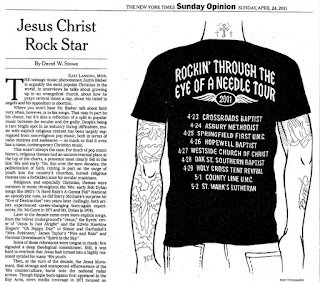 One finding: Op-Ed editors are really smart, and the ones I worked with seemed to have a high-level but necessarily ADHD graduate seminar going on in their suite. Second, you will find out what it's like to get your prose thoroughly workshopped to a degree you may not have experienced since undergraduate days--and only if you had a very dedicated composition teacher.

I wrote about all this for the UNC Press website, which asked me for a couple of contributions to mark the release of the paperback edition of No Sympathy for the Devil.  An excerpt:


Then, nothing for ten days. On April 19 Clay sent me his revised draft. Recognizably mine but much improved. Still the editorial prodding went on. The Op-Ed team  wondered what was lost in the split my piece highlighted between secular and sacred pop music. The question historians dread: “Why should we care, today?”

They were giving me an opening to weigh in on the current state of pop music. To render judgment on what I argued was a deeper gap between secular and religious than existed in the blissfully promiscuous Seventies, when artists threw in references to God and Jesus at will. But did I really care that these domains of popular music had diverged so far from each other? Had anything of value
been lost? I had to admit—no, I didn’t care. The issue just didn’t stir my pundit juices.

That was fine with Clay. But he wanted my update the next day. The MSU semester was at its most stressed and hectic but of course I found time. I realized these folks are never on leisurely academic time; it’s always daily-deadline pressure.

On April 22 he sent back his edits, along with yet another Op-Ed Seminar question that was potentially a can of worms. My piece talked almost exclusively about rock’n’roll; what about black music? This was actually a perfect opening to make the thing more timely; I was able to weave in a reference to Marvin Gaye’s What’s Going On, released almost exactly forty years earlier.

Clay wrote that he was leaving the office, handing me off to a different editor with yet another fantastic name: Honor Jones. Two days later, on Easter Sunday, the piece appeared. I rode my bike to the dairy store to buy a copy. It looked pretty sharp in print; the online music samples were a huge plus: “Eve of Destruction,” the Velvet Underground’s “Jesus” (a song I hadn’t known in time for the book), “Spirit in the Sky,” “For These Tears I Died,” “Superstar,” Dylan’s “Saved,” and yes, Lady Gaga’s brand new single, “Judas."

To see the rest of my UNC Press piece, go to http://uncpressblog.com/2013/03/20/david-w-stowe-from-the-book-to-the-breakfast-table/