This post marks the first in a series of short interviews with religious studies scholars and religious historians who work on American topics. I hope to conduct these interviews with senior, junior, and mid-career scholars from the 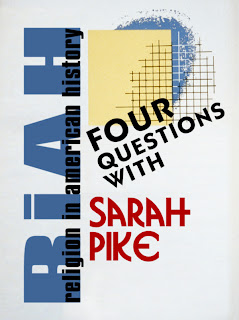 This inaugural interview is with Sarah Pike, a professor in the Department of Religious Studies, California State University, Chico.  Her innovative work will be familiar to many of our readers.  Pike has studied the relationship between religion and ethnicity, identity, and cultural expression.  Along with a variety of articles and book chapters, she is the author of Earthly Bodies, Magical Selves: Contemporary Pagans and The Search for Community (University of California Press, 2001) and New Age and Neopagan Religions in America (Columbia University Press, 2004).

Sarah Pike: When I entered graduate school, I intended to study Tibetan Buddhism, but within my first year of course work, I became increasingly interested in studying religion in my own “backyard.” I began to notice that the landscapes around me were full of stories about American religious life. In particular, I wondered about the mysterious classes offered by a little occult shop in my new hometown of Bloomington, Indiana. As it turned out, the world I found there was not unique to Bloomington, and the interests expressed at the shop were reflected across the nation. So I wanted to find out how the worlds of Witchcraft and magic fit into the broader story of American religion.

At the same time, issues concerning ritual and sacred space were compelling and powerful to me, especially after I discovered the field of women’s history during the 1980s as a Master’s student in religious studies. Carolyn Walker Bynum’s Holy Feast and Holy Fast: The Religious Significance of Food to Medieval Women (1987) came out the year I entered graduate school and Joan Wallach Scott’s Gender and the Politics of History was 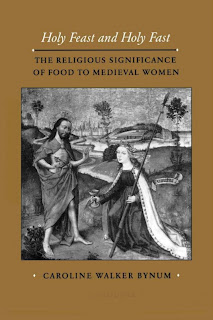 published the following year. The field of women’s/gender studies was generating a lot of excitement and it sparked my interest in exploring the relationships between gender, ritual, Witchcraft and magic. No scholarly studies had been done at that time on contemporary Witchcraft and few scholars of American religion were taking the Neopagan movement and its antecedents seriously. What different stories might be told about American religiosity from the vantage point of marginalized traditions that venerated goddesses, created altars and shrines in the woods or their backyards, and were often led by priestesses?

Pike: The religious history of America is as likely to be told from the coast of Northern California as from the Puritan communities of New England. We are more attentive to marginalized discourses and experiences, the construction of magic as a category, and how to understand popular practices and lived religion. In a chapter I wrote recently on “Wicca in the News” about changing representations of Witches in American news media since the 1960s (Oxford Handbook of Religion and the American News Media, 2012), I argue that reporters today rarely depict Witches as evil or satanic, even though stereotypes from the 1960s and 1970s of sexy young female Witches or cuddly cookie-baking elderly Witches-next-door still remain. In the past 25 years since I entered my first occult shop and started asking questions, the boundaries between categories like religion and magic and the differences between “folk,” “popular,” and “institutional” religion are treated with more nuance. And scholars of American religions are more likely to take traditions like Wicca seriously than they did when I was a graduate student, because Neopaganism has become firmly established across North America and formally recognized in government branches and institutions such as the military and prisons.

Pike: Theory can change our angle of reflection; it can help identify blind spots and lead us down unfamiliar paths that we might not otherwise have taken. I try to put theory into conversation with the people and places I study to see what will emerge. But my starting point is not the theoretical; it is always someone’s story or a ritual I observed or read about. In order to reflect on the meaning and significance of that story or ritual, I draw on theory promiscuously and don’t hesitate to cross disciplinary boundaries: Who will help me to think through the problems I encountered on the ground during a ritual, or in a historical text? What theoretical discipline might address a particular question from a perspective that will illuminate or problematize issues I have not attended to? Theory is most effectively drawn into conversation with the subjects of our research when it challenges our habitual ways of seeing and understanding those we study. Since the focus of much of my research has been on ritual and sacred space, I am most interested in theorizing about bodies and relationships within particular spaces, so Michel Foucault’s work on heterotopias in his essay “Of Other Spaces” (1967) and Judith Butler’s recent writings on the Occupy movement (2011) in which she draws on Hannah Arendt’s notion of a “space of appearance” have helped me to think about the dynamics of spaces that are constructed in opposition to the broader society.

Pike: My work has been based on the assumption that studying demonized people and seemingly strange practices will shed light on central issues of Americans’ religious lives and histories. I am currently working on two projects, both focused on the experiences and practices of “youth,” an often-ignored population of religious Americans. Although other marginalized populations are now getting their due, teenagers and young adults continue to be largely ignored in courses and scholarship on American religions. While historians of childhood often include adolescents and young adults in their work as an afterthought, little research has been done about their religious and spiritual lives. On the other hand, most scholarship on “youth” has been within a Marxist or cultural studies framework that downplays the role of religion.

The first project is about “internal revolutions”: how young people become involved with environmental activism during their teenage years, which often takes place through experiences of nature as a sacred presence and through music subcultures shaped by religious movements like Neopaganism, Krishna Consciousness and varieties of Islam. Experiences of nature as sacred during childhood, and especially adolescence are central to young environmental activists’ developing spiritual identities and political commitments. Young people frequently convert to activism in their teenage years. So, I am tracing the various factors that shape such conversions, including religious influences in youth music subcultures and ritualized environmental protests.

The second project is about the lineage of twenty-first century spiritual festivals, an interest that dates back to my first book on Neopagan Festivals, Earthly Bodies, Magical Selves (2001). Contemporary American music and art festivals that also serve as spiritual destinations are clearly not new. Art festivals like Burning Man and music festivals like Earthdance, Faerieworlds, and Coachella share much with nineteenth-century “holy fairs”: camp meetings, spiritualist conventions, lyceums, and Chautauquas, many of which attracted mainly young men and women. Contemporary gatherings did not simply emerge as a response to recent social and cultural shifts (because of the “Nones” for example), but have long histories. In this project I am exploring a set of tensions at festivals between the spiritual and the secular, sustainability and consumption, techniques of the body and inner transformation, the temporary and the permanent, nostalgia for the past and the thrust towards a new age.
Email Post
Labels: author interviews four questions with gender and religion Neopaganism new age occult paganism religion and the environment sarah pike space