My post today is a “this day in history” from my dissertation research. My dissertation examines how the beliefs and practice of Spiritualism helped Afro-creoles mediate the political, social, and cultural changes in New Orleans as the city moved from the antebellum period through Reconstruction. The messages the Cercle Harmonique received from the spirit world and the spirits who sent them offered the circle a forum for airing their political grievances and a place to imagine a more egalitarian world. Certain republican ideals, particularly those inherited from the memory of the French Revolution, were reinvigorated and reworked to relate to contemporary issues. While American religious history typically associates Spiritualism with white, liberal Protestants living in the northeast, I explore Spiritualism as practiced by New Orleanian Afro-creoles. 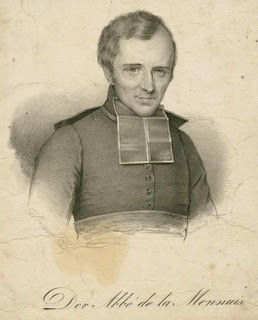 On March 25, 1869, the spirit “Lamenais,” a spirit who frequented the circle’s table, came to compare President Abraham Lincoln and Jesus. This wasn’t the first time that he taught via comparison; on another occasion this spirit explained how the creation of the US and the birth of Jesus both signaled new eras in humanity. This spirit, “Lamenais,” though spelled with only one “n” in his séance record sign-offs, was French priest Hugues-Félicité Robert de Lamennais (1782-1854). Lamennais was raised in a royalist household, but as he became increasingly interested in politics, Lamennais became more critical of the French Church and the government. He argued that the role of the Church was supposed to be fighting for the people, reforming society, and advancing justice. It would be his 1834 publication Paroles d’un Croyant (Words of a Believer) that would get him officially condemned by the Vatican in the Papal Encyclical Singulari nos (July 7, 1834). And his support for the Revolution of 1848 and his election as a deputy for Paris to the Constituent Assembly certainly didn’t help his standing with the Pope. But it made him popular in New Orleans. Lamennais’s Catholic background, combined with his willingness to be critical of the Church institution and “tyrants” of any form made him an attractive spirit for the Afro-creole Cercle Harmonique, who themselves came from creole Catholic families.

The message channeled by the medium 144 years ago covered a lot of territory. Lamennais expressed his approval of Narciso López’s attempts for Cuban independence from Spain; he predicted that through the “mysterious ways of the Divine Providence, Human Slavery shall disappear little by little on this continent;” he discussed the continuous struggle of “Progress” and “Truth” versus “moral slavery;” and he reprimanded Catholic priests in the South for their support of the Confederacy “preaching the sanctity of the horrible institution of slavery” and “blessing banners of the battalions which were forging new and stronger chains for their brothers.” 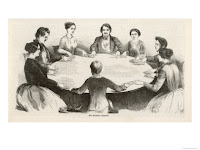 A key part of his message was his discussion of Lincoln—Lincoln who “sealed with his precious blood, the funeral stone which must cover Human Slavery.” For Lamennais, the comparison between Lincoln and Jesus was a simple one. “One died for Humanity; the other was sacrificed for wishing to liberate the black race, subdued under a degrading yoke by brute force.” Indeed, Lamennais’s message concluded with the sentence, “Bless Jesus and Lincoln: one will regenerate Humanity; the other, the Republic of the United States.”

The pro-Lincoln, pro-republicanism, anti-slavery message jived with the political goals and orientation of the Afro-creoles at the séance table that spring of 1869. And the message came with authority. A revolutionary Catholic priest not only chose to communicate with the circle but he also shared their political views and, with them, hoped for continued progress.
Email Post
Labels: emily's posts new orleans religion and politics seances spiritualism

Unknown said…
Great post, Emily; I just now saw this via facebook. I've often wondered about the political-religious visions turn of the century figures ascribed to Lincoln. There's a long literature on the juxtaposition of Jefferson and Jesus as the twin pillars of rural populism--with Jefferson's yeoman vision complimenting Jesus' universal message of salvation. But I've often wondered and noted if there was a northern corollary that compared Lincoln and the Lord in the industrial north--as Christian workers paired Lincoln's free labor ideal with the salvation story. You seeing anything similar? Something worth pursuing?
April 2, 2013 at 1:10 PM

esclark said…
Hi Chris - I think there's definitely something there worth pursuing. The New Orleans Spiritualists I'm researching often pair Lincoln with Jesus or identify Lincoln as a savior of the American people and the American project. The difference between your work and mine is context - industrial north vs. Reconstruction New Orleans. Could be a good comparative project!
April 4, 2013 at 6:30 AM