Asian Americans and the Color of Christ - A Round Table 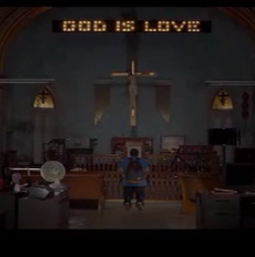 One of the quirkiest examples of Jesus in recent America was in the film 21 Jump Street. A spoof on the 1980s television show, the cinematic 21 Jump Street featured a moment when the character played by Jonah Hill tries to pray to a "Korean Jesus." (warning, clip has many curse words) His prayer is marked by confusion and profanity. At the end, the lead officer played by Ice Cube shouts at Hill. He verbally fills the sonic silence left by the Korean Jesus, explaining that Korean Jesus does not care about Hill's problems. As if there were not enough wrinkles to the scene of a black man speaking for a Korean sacred figure to a white nonbeliever, in the 1990s, Ice Cube was known for his particularly anti-Korean rap lyrics. The cinematic example reveals that there is much to consider in the realm of Asian American history and depictions of Jesus ... much more than is on display in The Color of Christ or American Jesus or Jesus in America or The Black Christ. Because of this, and with the encouragement of our friend Paul Lim of Vanderbilt University and his terrific workshop, we decided to convene a three-part online round table to address questions of "Asian Americans and the Color of Christ." Today's post from Joshua Paddison, who is the author of the fabulous book American Heathens: Religion, Race, and Reconstruction in California, will be followed by posts by Derek Chang and by Beth Hessel.

One of the challenges of writing a book as ambitious and wide-ranging as The Color of Christ is that many topics will necessarily be excluded. So rather than bemoan the lack of Asian American material in the book, I thought it would be fruitful to consider why it was (by and large) left out and how the inclusion of Asian American perspectives might have changed the book.  (These comments build on a conversation with Edward J. Blum that occurred at a panel focusing on The Color of Christ at last fall’s American Studies Association meeting.)

Despite Laurie Maffly-Kipp’s call in Re-Telling U.S. Religious History (1997) for “a reconsideration of religious history from the perspective of the Pacific Rim,” Asian American religious history remains largely unexplored. This is especially true for the nineteenth century, my own area of research, despite the fact that, according to the census, there were 114,189 people of Asian or Pacific Islander descent in the United States in 1900, a figure that omits all those who had lived in the U.S. and returned to China, Japan, Korea, India, or Hawaii in earlier decades. Yet historians of the nineteenth-century Asian American experience—I’m thinking of Gunter Barth, Sucheng Chan, Ronald Takaki, Judy Yung, Charles McClain, Yong Chen, Mary Ting Li Lui, John Kuo Wei Tchen, Madeline Hsu, Erika Lee, Mae Ngai, and others—have mostly focused on social, political, and legal history, mentioning religion only in passing. This lack of monographs means that, when synthetic works like The Color of Christ are written, there is not a stack of books for authors to turn to. (click to read on)

Nor are there easily accessible primary source materials available for writing Asian American religious history. Language barriers pose enormous challenges, of course, but even extant English-language primary sources are relatively difficult to access compared to those for African American and Native American religious history. There are no online repositories of primary sources or microfilm collections to request via ILL. Western denominational newspapers such as the California Christian Advocate or San Francisco Pacific, which reprinted letters, sermons, and speeches by Asian American Christians with surprising frequency, have not been digitized. Historians interested in Asian American Christianity must visit such places as the Graduate Theological Library in Berkeley, for its denominational periodicals; the Presbyterian Historical Society in Philadelphia, for its Board of Foreign Missions correspondence; and the Amistad Research Center in New Orleans, for its American Missionary Association records.

This kind of work is slowly being done, as shown by recent monographs by Derek Chang, Wendy Rouse Jorae, and David K. Yoo, and the stack of books slowly grows with it. So how would the inclusion of Asian American Christians have changed The Color of Christ? I don’t think it would have disrupted the book’s central trajectory, its account of the rise and cultural penetration of a non-Semitic white Jesus. However, consideration of the ways Asian Americans viewed, represented, and worshiped Jesus Christ—as well as the ways xenophobes and white supremacists employed Christianity to justify anti-Asian exclusion, segregation, discrimination, and violence—would have given that story additional wrinkles.

Blum and Harvey write, “Assumptions of Christ’s whiteness became so powerful [by the 1910s] that they even reverberated into legal arguments about citizenship for immigrants” (p. 149), going on to discuss the George Dow and Bhagat Singh Thind cases. In fact, logics of Christianity and ethnology had always been intertwined in immigration debates; the Page Act of 1875, the nation’s first substantial restriction of immigration, curbed the arrival of Chinese women in the name of stamping out “wickedness” (i.e., prostitution). Congressmen’s arguments for Chinese exclusion, passed in 1882, hinged on the religious and racial threats posed by unchecked immigration from China, which they said would turn Americans into “a mongrel race, half Chinese and half Caucasian … half pagan, half Christian, semi-Oriental, altogether mixed and very bad.”

In addition to revealing this longer history of religio-racial immigration debate, greater attention to Asian American history would have added regional nuance to the arrival of the Nordic Christ. Irish Catholic laborers in nineteenth-century California, themselves facing nativism and bigotry, seized upon the presence of immigrants from China, Japan, and Korea to cement their own white Christian patriotism. “All other issues but that of the great one—Christianity or Paganism—must be set aside, and minor differences be forgotten in the presence of a common danger,” advised San Francisco’s Catholic newspaper in 1873. This construction of the Chinese as  “common danger” helped unite Catholic and Protestant whites in California earlier than in other regions; in other words, whiteness consolidated earlier in the West. Was Jesus whiter earlier in the West as well?

Finally, The Color of Christ would have benefited from the inclusion of the voices of Asian American Christians, who used denominational resources and Christian theology in their own struggles for political and civil rights. “I am a Chinaman and a Christian,” Congregationalist Jee Gam wrote in opposition to the extension of Chinese exclusion in 1892. “I am not any less Chinese for being a follower of Christ.” He went on to call exclusion “un-Christian, for it is contrary to the teachings of Christ.”

How did Jee Gam and other nineteenth-century Asian American Christians picture Jesus? How Asian was he? Further historical digging is required to answer these questions, but my own research suggests that Chinese American Protestants in California consistently preferred Chinese ministers to white ones. In 1885, for example, members of the Presbyterian Chinese mission in Los Angeles informed the Board of Foreign Missions that they wanted Soo Hoo Nam Art as pastor rather than a white minister who “only talk English our boys not fond to him, and please hope you send our preacher as soon as you can.” Compared to white Protestants, it is not hard to imagine that the Jesus they prayed to was less white; their Jesus was undoubtedly more radically inclusive, more accepting of all God’s children. In the words of Congregationalist lay preacher Lem Chung: “We ought to love one another. It is our duty to obey this command. Some may say: ‘he may be a Christian, but he is not my countryman, not near to me. I am a white man, he is black, or he is a yellow man, he does not belong to my family or friends. I will not love him. It can be no sin to hate him.’ Not so, my friends.”
Email Post
Labels: asian american religion color of christ jesus in america rap religion and film/television

Unknown said…
"Further historical digging is required to answer these questions, but my own research suggests that Chinese American Protestants in California consistently preferred Chinese ministers to white ones."
"Compared to white Protestants, it is not hard to imagine that the Jesus they prayed to was less white; their Jesus was undoubtedly more radically inclusive, more accepting of all God’s children."

Why? Because they preferred Chinese ministers? Is it not possible for an ethnic group to prefer to be led by someone of their ethnicity without imagining their god to be of the same ethnicity?

What has history shown about immigrants and assimilation? That acceptance into the US is through conformity. Immigrants/minorities were very aware of white privilege, they learned this concept the minute they set foot in the US. If there were (this is the key part which you explained in the article about lack of research) images of a white Jesus in their Church, community, or homes then I think their image of Jesus would be white as well.

I am also having difficulty finding images of Christ in photos of Japanese Americans. The few and far between photos of early 20th century display a white jesus.