ACT UP, Fight Back, Fight AIDS

Rachel Lindsey recently asked about our favorite documentaries for teaching. I haven't used United in Anger yet, but I plan to do so the next time I teach a class on sexuality, social protest, and/or religion.  This film by Jim Hubbard, which grows out of his work on the ACT UP Oral History Project, explores the history of the AIDS Coalition to Unleash Power, and its efforts to both raise awareness and transform government policy, from its founding in 1987 through 1993, when the large number of deaths devastated members (the organization still exists). ACT UP's tactics were confrontational and controversial, but ultimately successful. The film shows archival footage of protests at the National Institutes of Health and the Center for Disease Control, and, as one member recalls, panels reviewing AIDS drugs for approval eventually--and for the first time--included HIV-positive individuals as experts.

One of themes of the film is the diversity of ACT UP members. This organization was not limited to gay white men, as many might assume. Hubbard interviews dozens of individuals in the documentary, from over one hundred interviews in the ACT UP Oral History Project, and more activists are identified throughout the film, including, tragically, some with their birth and death dates. The activists are/were men and women from all different racial, ethnic, and class backgrounds, united in their need to do something about the disease ravaging their bodies, friends, families, and communities. 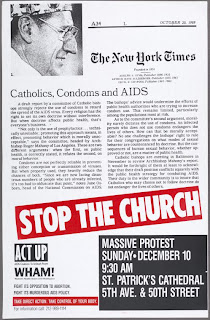 Historians of religion and social movements will be interested in the film's coverage of the high-profile demonstration known as "Stop the Church," targeting John Cardinal O'Connor and New York City's St. Patrick's Cathedral on December 10, 1989. The film shows the debate within the organization, with activists divided over how disruptive to be during a Sunday mass, the scheduled time for the protest. Some activists noted that they were not protesting the Catholic religion, but the church's policies. ACT UP did not overcome these divisions, but, in the spirit of their non-hierarchical organization, went into the demonstration divided. During the mass, protestors staged a "die in" in the main aisle leading up to the altar. The film shows parishioners looking askance at the bodies, while the mass proceeded as usual. Soon, other protestors began yelling, asking O'Connor to justify the church's deadly restrictions on condom use and sex education, and police moved in to arrest the protestors. Immediately outside the church, Sandy Schulman, now Hubbard's co-producer and co-founder of the ACT UP Oral History Project, was interviewed, and she argued that the disturbance had worked against the protestors because they lost the sympathy of the people in the pews. Another ACT UP veteran and interviewee (also a woman) argues that the protest was a success, costing the Catholic Church some of its political power in the city.  In addition to the activists inside, this member points out that thousands demonstrated outside the church.

This documentary will give ACT UP a prominent place in the history of American social movements. Like abolitionist come-outers, most notably Stephen S. Foster in "The Brotherhood of Thieves, or, A True Picture of the American Church and Clergy," ACT UP made the controversial decision to condemn religious institutions for their moral failings. I hope "United in Anger," which includes a helpful study guide on its website, and the Stop the Church demonstration, will provoke interesting class discussion about the value of social protest, the pros and cons of "the church" as a target and location of protest, and the role of religion in the midst of a public health crisis like AIDS.

For more information on the image and others like it, see the New York Public Library.

Unknown said…
I'm so excited to see other religion scholars using this documentary! I've taught Stop the Church in a course on "American Religion in the Age of AIDS," and I have a chapter on Stop the Church in my current book project. Mark Jordan also has a nice discussion of it in his recent _Recruiting Young Love_.

I've also taught Common Threads, on the AIDS quilt, which is a real tear jerker, but it opened into an excellent discussion about memorialization and sentimentality.

Unknown said…
One quick note -- if you can get your hands on it, there's also a documentary by Robert Hilferty called "Stop the Church" about the protest which is also excellent.

Thanks again for posting on this, Prof. Faulkner! I'd love to know how your students respond to learning about the AIDS epidemic. I've found mine to be totally fascinating by it. Their reference point for AIDS has tended to be Africa (and with good reason, no doubt), but I find them quite eager to learn about the history of AIDS in the US, too.
March 22, 2013 at 9:22 AM

asserts ACT UP was effective in changing some government policy, but the assault on St. Patrick's Cathedral was anything but.

What some supporters appear to deem a high point in the movement was perhaps its lowest.

In the past, Act-Up members halted trading on the floor of the New York Stock Exchange, delayed for two hours the opening of an international AIDS conference in Montreal, and bolted and chained themselves to the offices of pharmaceutical companies. But they had never set off the kind of controversy that began on Dec. 10 at St. Patrick's when one member crumbled a communion wafer, desecrating what Roman Catholics believe to be the body of Christ.

David N. Dinkins, then the Mayor-elect, and Gov. Mario M. Cuomo said they deplored the demonstration. Andy Humm, a spokesman for the Coalition for Gay and Lesbian Rights, said the demonstration was ''stupid and wrong-headed.''

Over the last few weeks the group has held several soul-searching sessions to discuss its past and plot its future. The debate offers a look at the passions that suffuse Act-Up and at the complicated pain of living and dying with AIDS.

Shouting in a hallway as one meeting concluded, Peter Staley, a 28-year-old former bond trader who is among Act-Up's leaders, denounced the St. Patrick's protest as an ''utter failure'' and a ''selfish, macho thing.''

Though intended to protest the AIDS policies of the Roman Catholic Archbishop of New York, John Cardinal O'Connor, the action failed, Mr. Staley said, because it shifted the focus to the subject of religious freedom.