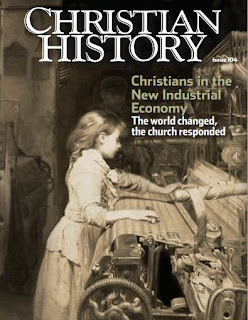 Whether or not their interest in charity and a living wage was a recent turn of the early twentieth century, I thought, white male Protestants were still quite far from radicals. They still saw themselves as the only ones fit to rule in the early twentieth century, and were not shy about admitting this. If Josiah Strong, the ardent nationalist and not closeted racist, could be friends with George Herron (the Christian Socialist) and Lyman Abbott, the racist defender of the Prosperity gospel, could be identified as a "liberal Progressive" because of his stance on science and Biblical interpretation, then the Social Gospel was really just another name for the more "charitable" minded middle class Protestant ruling classes.


All those early twentieth century "associations" for helping the poor struck me as excuses to wear the newest fineries to a public meeting and further allay white Protestant consciences that they were getting richer off the cheap labor of immigrants and African Americans. Whether a "response" or something ongoing or not, the Social Gospel movement struck me as an excellent example of the fact that white Protestant leaders of the early twentieth century were rarely enthusiastic about living in social equality with non white Protestants. As I began my dissertation on the subject six years ago, I boldly argued that this debate on the Social Gospel was outdated and should finally be put to bed. It grew up in a world (1930s-1960s) which questioned what role the Protestant churches had played, or ought to have played, in economic justice initiatives.

Efforts to "recover" what churches had done was primarily apologetics. The effort came on the heels of a generation of angsty working class Christians who blamed the churches for not doing more. Middle class Protestants who were correct when they said that they had been socially active for quite a while. But, I said, it was not whether they were doing something that was the question, I said. The question was what their actions were, and the extent to which they were helpful.

But years later, I think I've changed my mind. As a new generation of scholars point out to us the white supremacist heritage of white Protestant Jesus figures and Christian organizations in the nineteenth and twentieth centuries, we have new reasons to examine the roots of the Social Gospel and the motives of Social Gospel leaders. To what extent was the early twentieth century "Church," including the economic justice advocates (Protestant and Catholic) ultimately still grounded in a pro-capitalist and white supremacist project? Were liberal church leaders as fearful of the prospect of social equality as their images of Christ portrayed?

We know that some leaders were trailblazers in social justice: how far did they stray from their more conservative brethren, and what help did they use to navigate this world? These questions are especially important to those currently engaged in social justice initiatives in the name of Christ, for it requires this kind of careful, if painful, historical analysis to learn from mistakes of the past and build upon successes.

The newest magazine issue from Christian History has revisited this old question in just this way. Titled, "Christians in the New Industrial Economy: The World Changed, The Church Responded," short articles by scholars for a non-scholarly audience address the history of the Social Gospel in a new way. In an introductory essay, I discuss why churches were fragmented over class lines, emphasizing the fact that rich Protestant church leaders had a very different Christianity from that of workers. Next, Jeffrey Webb discusses how converting native peoples and "using them for economic purposes had long been intertwined." William Kostlevy brings historians and the non-scholarly public up to date on what we now know about the Social Gospel and how it operated in the political and industrial world of its day. Kevin Schmiesing discusses the Catholic Church's response to industrial oppression and poverty. Finally, historian and magazine editor Jennifer Woodruff Tait discusses the Methodist origins of the Salvation Army in the Victorian British world.

The magazine issue is free online and available in print for a small fee. Donations are also encouraged--they keep the excellent magazine of public history alive. While you're at it, check out the other terrific issues the magazine has put out over the years. I am looking forward to reading this older issu
e on the history of Church involvement in healthcare and hospitals. Several writers for this blog have long been involved with the publication.
Email Post
Labels: janine's posts religion and labor religion and social policy social gospel social justice

Mark T. Edwards said…
Thanks for these reflections and the nod to Christian History; very much looking forward to reading it.

In the Kingdom of God in America (1936), H. Richard Niebuhr suggested that the Social Gospel was merely a desparate attempt to maintain the political and economic quo (Niebuhr was still a member of the Socialist Party then). To what extent do you think the culture wars have led us to romanticize the social gospel, possibly even Christian interracialism, and to forget such early insider critiques such as Niebuhr's?
February 9, 2013 at 12:22 PM

Tom Van Dyke said…
And although the "social gospel" carried Wm. Jennings Bryan thrice to the Democratic nomination, he lost decisively each time. At some point the question becomes whether such things constitute history or the footnotes to history.

That the Industrial Revolution created a societal imbalance and disruption not seen in the western world since the Black Plague is indisputable; the question is whether or how much this force or that--say the social gospel--was responsible for swinging the pendulum back.

If it hadn't been "social gospel," would it have been the forces of political modernity from Marx onward that would have turned the trick anyway, that the Beatitudes were more a beard for social[ist] politics than their driving force?

And what of America's embrace of free market capitalism regardless, from McKinley through Cool Cal ["America's business is business"], broken only by Woody Wilson slipping through the Teddy/Taft imbroglio?

Again, we must ask whether fascination with the anti-capitalist losers is history or if it's more their latter-day successors taking a trip to ancestry.com.

Not that there's anything wrong with that, mind you. But it's like a biography of Tracy Stallard or Ralph Branca, no matter how well done.
February 9, 2013 at 8:54 PM

Curtis J Evans said…
Mark, I guess I see things differently and to some extent this may have something to do with who is meant by "us" in your comments. I don't see that the Social Gospel has been romanticized. It strikes me, as the late Bill Hutchison used to say and wrote about in his book, "The Modernist Impulse," so much of the historiography on the SG was affected by the Niebubrs' more general scathing critiques of liberal Protestantism, especially what they felt were naive notions of human nature, sin, how to realize and apply the ethics of Jesus in society, etc. Before the works of Ronald White and Ralph Luker (which I still don't find entirely convincing) in the early 1990s, with Luker especially responding to a dissertation, among other things, that accused SG leaders of suffering from "astigmatism" on the problem of race, the general historical trend was that SG leaders were deeply racist or ignored the problem of race. Or, race was simply not written about at all in some of the earlier works on the SG (for example, the standard older text on the SG by C. Howard Hopkins, which was publised in 1940. William McLouglin's 1978 book/essay collection on religion and social change pointed to rampant imperialism and notions of cultural superiority in his concluding remarks on the SG. So it is not at all clear to me that Christian interracialism has been regarded as a central aspect of the SG, certainly not by historians. If anything, the culture wars have perhaps prompted us to reconsider and rethink why so much of public writing about religion and politics has subsumed "Christian" under what the Christian Right does and says. At least that's my general take on things. But good to read more about this discussion and glad to see Janine's reflections.
February 9, 2013 at 10:03 PM

Mark T. Edwards said…
Thanks for the thoughtful correction, Curtis. That was why I said "possibly even" Christian interracialism, because I wasn't sure either if Christian interracialism belonged in my comment. At the time, I was thinking of Gilmore's criticisms of Southern racial moderates in Defying Dixie, under which some Christian interracialists (Francis Miller, for instance) would fall, but certainly not all. And you're right that Niebuhr's "God without wrath" charge colored thoughts about the SG for decades after, for which necessary recovery work (Gary Dorrien's, for example) needed to be done. But don't you think that more critical investigations of the SG tradition, like Susan Curtis's Consuming Faith and Gene McCarraher's Christian Critics, have been unwelcome by those working in the SG tradition?
February 10, 2013 at 5:09 AM

Curtis J Evans said…
Hi Mark,
the short response to your question about responses to Curtis and McCarraher's works is, I don't know. I've read some reviews that are not unfair in their treatment and raise appropriate concerns. But I'm not sure what a "general" reception to the books have been. I see McCarraher's work as more nuanced and thoughtful treatment of the SG within a broader narrative, whereas Curtis makes rather grand and arguable claims about capitulation to consumerism, gender anxieties (on this point, she is mostly convincing and repeats some of Janet Fisburn's earlier arguments in her book, "The Fatherhood of God and the Victorian Family: The Social Gospel in America"), etc. If I may show my hand, so to speak, on historical grounds, I just don't find Curtis all that convincing on a number of points (and the perennial definition problem becomes all the more acute in a work like Curtis'). I should hope that my negative response to her book is not the result of some romantic view that I might have of the SG! One thing is clear to me: the kind of work that Janine and others are doing is absolutely necessary to address and clarify (or challenge) the more grand claims that works like Curtis make.
February 10, 2013 at 11:56 AM

Mark T. Edwards said…
I appreciate your perspectives on Curtis and McCarraher very much, Curtis, and don't find you "romantic" about the SG in the least. It's funny, i've usually found Curtis to have the more nuanced and empathetic narrative of the two. I'm in complete agreement with you, though, that we still have alot to learn about the SG tradition, and that studies such as Janine's, yours, and others will be central to that rethinking.
February 10, 2013 at 12:21 PM

Lilian Calles Barger said…
Coming here at the tail in and not having the articles referred to. But I have been doing research on the social gospel which ties into my history of the emergence of liberation theology in the 1960s. The social gospel marked a major shift in theological thought from individual salvation to social salvation by incorporating social science. There was also a contemporaneous black social gospel. The theologian Gary Dorrien in currently working on a history of the black social gospel. Understanding of this movement has focused on its social aspects but in the history of religious thought they were way ahead of their times and more influential than it appears. Virtually all Christian groups today hold to some form of "social justice" teaching. Individual salvation alone is no longer seen as sufficient.
February 14, 2013 at 5:52 PM