The Politics of Religion

by Emily Suzanne Clark
This past weekend was the 12th annual Florida State University Graduate Student Symposium (#fsugss on Twitter). Dr. Aaron Hughes from the University of Rochester was this year’s keynote speaker, and this year’s conference theme was the “Politics of Religion.” There were many great panels that took place over the weekend, and the presented papers covered all sorts of topics in the field. I’ll focus my reflections here on discussions of theory issues in our field; so, if theory isn’t your bag, this post may not be for you. However, as Dr. Hughes told us Friday evening, it doesn’t matter what tradition or area you focus in, if you study religion, you should be aware of the debates in theory and method. 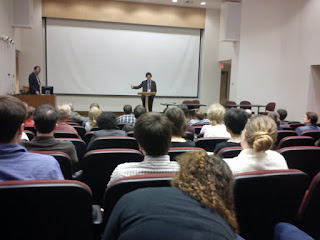 Professor Hughes’s keynote address was entitled “The Politics of Theory and Method.” In it, he explained how the study of religion, discussions of  theory, and various scholarly methodologies are political. It was a great keynote and could be a looooong blog post in and of itself, so I’ll focus on just a few things. The embedded politics in theories of religion and theoretical approaches to the study of religion was one thread of his keynote that struck a chord with me. In 1903, the Association of Biblical Instructors in American Colleges and Secondary Schools was founded, an organization that changed its name to National Association of Biblical Instructors (NABI) in 1922. Most, if not all, members of NABI were not only Bible instructors, but also Protestants committed to the text’s theological value and saw sharing that value as part of their task. In brief, religion could be celebrated in the classroom. This is the organization that would become the American Academy of Religion.


The 1963 Abington School District vs. Schempp case declared school-sponsored Bible readings in public schools to be unconstitutional, but also decided that instructors could refer to the cultural, literal, and historical importance of religion. NABI’s name change to the AAR happened during the case’s immediate aftermath and was meant to reflect the organization’s inclusion of traditions outside Judaism and Christianity's boundaries. However, as Hughes noted, much of NABI’s original goals were sublimated in the AAR, and theoretical approaches to religion influenced by Eliade’s sui generis understanding of the sacred allowed many religion scholars to continue teaching about the realness and inherent goodness of religion. Religion, regardless of the culture it resided in, was a good thing, and being critical of religion was rare and often frowned upon. It would be later theorists of religion, such as Russell McCutcheon, who would make it their charge to identify these types of political agendas that seem embedded in the field. This would not be the only time the field’s past was a topic of symposium discussion. During the faculty roundtable the following evening, FSU’s Dr. Martin Kavka pointed out how, in many ways, religion scholars are bound by our own disciplinary pasts, and that, for better or for worse, this has implications on our scholarship past and present. What’s important Hughes argued in the keynote, is that scholars be aware of the debates that go on in religious studies theory and method, because it doesn’t matter one’s focus, we all do it. We all engage the topic of religion, we all have an understanding of what “religion” is, and we all have a methodology. (This reminded me of Kathryn Lofton’s essay “Religious History as Religious Studies” in July 2012’s Religion where she says “Religious studies departments are confederacies of difference gathered together to determine the subject of religion.” Theory brings us together.)

During a roundtable discussion led by graduate students on the study of religion the next afternoon, which included grad students in Religion, English, Political Science, and History departments, the question of defining religion was raised, as well as asking what, if anything, is gained when one defines it. Kavka noted from the audience how it seemed that in fields outside Religious Studies, be it History, English, or Political Science, “religion” has an interruptive potential—that is to say, that “religion” can break into other disciplines' theory debates in a way that it can’t in our own. Hughes also chimed in from the audience suggesting that instead of trying to find some universal definition of religion, we should be paying attention to what we and other scholars define the religious against and ask why.

On Saturday evening, there was a faculty roundtable that included Hughes, Kavka, FSU’s Dr. Joseph Hellweg (a brilliant ethnographer of religion in West Africa) and the blog’s own Dr. Rachel Lindsey (who we’re lucky to have visiting this year at FSU). Each discussed what is at stake in their own research and how their work intersects with politics. Hellweg discussed the significance of cultural difference, insider knowledge, being a cultural outsider in his fieldwork, and his initiation into a dozo Muslim hunting society. Kavka, inquiring on the potential of discussing the function of theology in religious studies, stated that theology does not need to be a “dirty” word. Hughes discussed the politics of holding our subjects “dear,” and endorsed a critical approach. Lindsey examined how the intersections of citizenship and religion are political, and, in the words of my fellow grad student Jeff Wheatley, was “dropping knowledge bombs on politics in the classroom.” The Q&A was one of the best parts of the whole weekend, which is not surprising consider the all-star lineup on the roundtable.

I left symposium weekend with a re-energized feeling about my research and a recommitment to be even more cognizant of “the theory wars.” The FSU Symposium is what I and other FSU grad students call “the most wonderful time of the year” due to the great receptions (we’re famous for our beer selection at dinner), but even more for the conversations we have. So be sure to come to Tallahassee next February, and join FSU for what will be another great and engaging symposium.