The Places in Which We Work

To what extent should the places in which we work--not the institutions, but rather our local communities and their religious landscapes--influence our scholarship and especially teaching of religion in America?

I have pondered this question from the vantage point of my own place: Bucknell University, located in the Susquehanna Valley of central Pennsylvania and about an hour north of our capital, Harrisburg. As I moved here and settled into my job and daily life, I began to think about what it meant to be a teacher and scholar here in this place. In other words, what difference did it make that I was teaching about and studying American religion in the middle of Pennsylvania rather than in North Carolina (during my PhD program) or at Drake University in Iowa (during my first job)? And that's when I began to think about the "plain people." 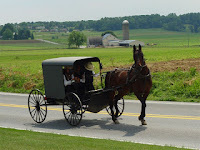 The rural areas that surround Bucknell contain many communities of Amish, Old Order Mennonite, and other "plain people" who practice separation from the world, dress plainly, and live simply. It's hard not to think about them when regularly driving past their horses and buggies, visiting our local farmers' market where they have many stands, or shopping at the discount grocery store owned and staffed by Old Order Mennonites. After my first semester here, I determined that I wanted to incorporate plain people into my historical survey course on religion in the United States in a substantive rather than only cursory way. While their presence is not unique to our area, of course, I thought that studying plain people would give my students both insight into the local religious landscape as well as a deeper appreciation of these traditionalist communities so visible in our area.

To accomplish this goal, I have assigned Amish Grace: How Forgiveness Transcended Tragedy by Donald Kraybill, Steven Nolt, and David Weaver-Zercher. The book recounts the story of how the Amish community of Nickel Mines, Pennsylvania (near Lancaster, the heart of Amish country) responded with grace and forgiveness to a schoolhouse shooting in 2006 that left five children dead and five others injured. Beyond simply narrating the heart-wrenching events, the authors analyze how the countercultural "lived religion" of the Amish--that is, the ways in which their particular religious beliefs and rituals shape their everyday lives and experiences--prepared them to respond in this fashion. In the four semesters that I have used this book, it has generated excellent discussions and pushed students to think about "lived religion" in new ways.

In keeping with the theme of using local (or, rather, reasonably close) resources, one semester I invited to my class one of the authors of Amish Grace: Dave Weaver-Zercher, professor of American religious history at Messiah College outside of Harrisburg. Dave did an outstanding job of discussing how he and his co-authors produced the book and answering students' questions. (For a different course on religion and American politics last semester, I was also able to bring to campus our blog's own John Fea, also from Messiah College. John spoke to my class after we read his Was America Founded as a Christian Nation? and then gave a well-received public lecture.)

In addition to reading Amish Grace, I would like to figure out ways to have my students interact directly (but respectfully, of course) with local plain people. While this goal may prove too lofty, I am hoping that friendships that my family and I are beginning to build with several Old Order Mennonite families may facilitate its realization. Last fall, our closest Old Order friends invited us to their church, and my daughters and I rode over a half hour each way in their horse and buggy. We sat through a service that consisted of over two hours of preaching and plain singing in Pennsylvania Dutch (their German dialect), and then we returned to our friends' house for lunch and a long afternoon of conversation with seven other Old Order families. While I don't expect to show up again at their church with 35 college students in tow, I am hoping that members of this community will be open to talking to my students.

As of now, my place in central Pennsylvania has not affected my scholarship. I used national publications as my sources for the book I am completing on politically progressive evangelicalism, and my methodology did not involve any ethnographic work. Besides, it's hard to find progressive evangelicals in this overwhelmingly conservative area. But as I develop my future research projects, I do want to consider how my particular interests may intersect with local resources.

We all know that place matters in terms of how our subjects believe and behave religiously. So let me pose these questions to readers: To what extent does place matter to us? How, if at all, has the nature of your own place influenced your teaching and even research on religion in America?  In what ways are you taking advantage of the unique religious landscape and resources of your area? I know that in recent posts Seth Dowland and Michael Pasquier have touched upon this subject, and I look forward to hearing from others of you.
Email Post
Labels: Amish brantley's posts teaching teaching resources

Mark T. Edwards said…
Great reflections and question! As a Northeast PA boy who grew up sledding and picking snowball fights with Bloom University students, and eventually graduated from there, and attended a 77s concert at Messiah, I have a deep connection to that place and people.

When I taught as a grad student at Purdue, I assigned Liz Cohen's Making a New Deal; students generally hated it, and 17 out of 95 downloaded essays from the internet as their "own", but several had grown up among Cohen's people and really engaged the book in a profoundly personal way. Small victories.

Now, being in Michigan, I reference Detroit alot and use Sugrue's book, which alot of students resonate with, especially non-traditionals. I live in Jackson next to Spring Arbor, and made friends with an ice cream shop owner (always a bad idea), a nice old-timey Protestant and bit of a local historian; I give extra credit for students to visit with him, find out why Jacksonn IS the birthplace of GOP 1.0, and eat some of his hershey's selection.

As far as places impacting research, I'm currently plotting out a history/ethnography of ecumenical groups and churches in Detroit. I was initially considering Indi. but then thought, "I'm right here, why wouldn't it be Detroit?" BTW, if anyone knows of previous studies that touch on religious life in Detroit, I'd much appreciate the reference.
February 26, 2013 at 5:53 AM

Trevor Burrows said…
This is a great post - I think it, along with Mark's comment, really speaks to the usefulness of bringing relatively local subjects into the classroom. I'm sitting in on a Modern Jewish History undergrad course this semester, and the prof is having her students head out on a "scavenger hunt" to find and research landmarks of Jewish interest. Now, this is in Greater Lafayette, Indiana - not a county known worldwide for its massive Jewish community or history. But it *does* have a substantial history, much of which is quite visible yet regularly overlooked. She says she's had a fair amount of success with the project, in part because the students are engaged: they get to add distinctly new knowledge to a topic they already know something about (where they live).

In terms of research, there's an element of practicality and usefulness to doing something near your current location. I'm still hammering out my dissertation project, but I am almost positive that I will be using a nearby city as my primary case study. Not only does it make the research process a bit easier, but it also gives me a chance to a bit more connected to the topic. I can see buildings or intersections of significance, visit landmarks - places that may or may not make it into the final product, but will undoubtedly make me a better student, teacher, and researcher.
February 26, 2013 at 6:20 AM

Curtis J. Evans said…
As a Chicagoan of nearly six years, I’ve had to find my place here. Walking from the condo to my office, I pass at least three churches only a few blocks apart. Often I wonder about their history and the changes they’ve witnessed over the years. Besides my assigning of books on some aspect of the religious history of the city, I’ve not yet done the hard work of field trips and certainly not ethnography of any kind (unless one counts visiting churches to get a “feel” for different institutions as "study" of some kind). In my survey course on African American religion, which is taken by undergraduates, I assign Wallace Best’s “Passionately Human, No Less Divine.” That has always provoked good discussion and led to substantive conversations about the city today. Although not entirely on Chicago, we've also read in several instances John McGreevy’s “Parish Boundaries.” Usually, only one student likes the book (which is one of my favorite texts), but it does open up conversation about neighborhoods in Chicago. I’ve often used excerpts from the classic “Black Metropolis” (1945), which was such a vivid portrayal of Chicago's changing racial dynamics during the Second World War years. I wonder if my own sense that I don’t yet “know” Chicago has been one factor in my tardiness in venturing forth with students into neighborhoods and houses of worship. As a child of the rural South, I am still adjusting to city life, even though I have lived in large cities for many years. The thought of holding in my hand clumps of rich black soil as I was working in the family garden rushes to my mind. Car trips in the MS Delta buried deeply in my psyche might be just as significant in my assigning John Giggie’s “After Redemption” as the book's own merits and its compelling description of black religion life in the Delta in a period much before my time there. I suppose too that living in Chicago has a way of forcing me to realize how the past is so much in the present since the simple act of riding in a taxi and asking a few questions elicits from the driver memories and conversations about neighborhoods, race, place, etc. and one gets the sense that history is continuously playing itself out in the lives of many who feel, for whatever reason, that the past cannot be so neatly sealed off from the present. Space for them is a way of recognizing and reordering that past. Or so it seems to me.
February 26, 2013 at 2:42 PM

David Stowe said…
Teaching in Michigan, like Mark, I have tried to make myself aware of the state's distinctive religious landscape. Detroit, with its important African American churches and Arab-American population and robust Muslim communities. Grand Rapids, with its very different Dutch Reformed tradition. And the important Amerindian groups like the Ojibwe. For my current research on Psalm 137 I visited Detroit's New Bethel Baptist Church and interviewed the current pastor, who succeeded C. L. Franklin.
February 28, 2013 at 6:43 AM