The Book of Mormon in Fifteen Days 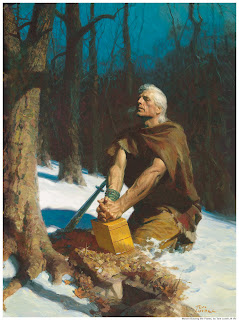 After years of studying the history of Mormonism, I finally resolved to read the tradition's founding scripture in short order: the Book of Mormon in fifteen days. Because of its large print and easy-to-read format (I'm not quite as old as that makes me sound), I chose Royal Skousen's The Book of Mormon: The Earliest Text (Yale, 2009) for the task. I've also kept David Hardy's Understanding the Book of Mormon on hand as a reference guide.


So that I can fit it in a blog post, here's a very short reaction to each book (I gave myself only fifty words per book).


1 Nephi. Major action here -- Lehi's family flees Jerusalem, takes a boat to the "land of promise." Of note: plates, Christ, dark skin as a curse, visions (of Christ "above that of the sun at noonday"), stock characters, prophecies about the New World. Finally, I understand the "Sword of Laban" references.


2 Nephi. Lehi blesses his children, die. Dark skin = God's curse, emphasis upon free agency, allusions to Joseph Smith and the Book of Mormon, almost constant prophecies about Christ. Interesting that quotes from Isaiah are in the KJV. 2 Nephi 2 my favorite passage in BOM.


Enos (Jacob's son). 27 verses only. Gets plates from his father. Lamanites (descendants of Lehi's sons Laman and Lemuel and others opposed to Nephi's descendants) have shaved heads, wear only "a short skin girded about their loins," and eat only raw meat. Nephites raise grain, fruit, and flocks. Prophecies of coming wars.


Jarom (Enos's son). Gets plates from his father (who with his fathers revealed "the plan of salvation"). Lamanites "drink the blood of beasts." Nephites fight them off.


Omni (Jarom's son). Plates passed down, eventually come to Amaleki. Mosiah flees to the land of Zarahemla and there becomes king. The ancestors of the Zarahemlans also left Jerusalem at the time of its destruction. Mosiah helps the Zarahemlans find a man named Coriantumr, whose knowledge stretches back to the Tower of Babel.


Mormon. New narrator. Major editor of the entire BOM. King Benjamin = righteous. Now we are moving on from the plates of Nephi. Wish Mormon had announced himself as editor from the get-go.


Mosiah. (Done with tiny books). Mosiah inherits power from his father King Benjamin. Expedition by some Nephites back to their old land, encounter with Limhi. Excursus through Record of Zeniff. Great heroes and villains in this book. Mosiah rejects monarchy at end of book -- elections are held.


Alma. 63 chapters! Hundreds of pages in Skousen's edition! Alma entirely derailed my plans. I was overconfident after reading Enos, Jarom, Omni, and the Words of Mormon. I was ahead of schedule when I finished Mosiah. Alma, though, did me in. For the last week, I've intended to resume my reading schedule, knowing that if I read Alma, I'd finish the rest in short order. Now, it's the BOM in fifteen days, but not fifteen consecutive days (being in the D.C. area, it was easy to find a loophole).


In any event, I've read about half, and it's been profitable. A few thoughts:


- Some people read the BOM with the goal of refuting its claim to be an ancient record, for instance, by looking for reflections of Jacksonian age American culture within the text. Others read it while praying that they would know whether the BOM is the word of God. I didn't approach the text with either of those reading strategies. I've been reading simply to get a sense of the overall narrative, the narrators, and the themes. This is -- obviously -- a really good idea if one teaches courses that include material on Mormonism.


- Even from the bits I'd read previously and from what I've read in secondary sources, I knew that the BOM is heavily christocentric. Still, it's even more christocentric than I presumed. It's overwhelmingly christocentric. Detailed prophecies about Jesus all the time.


- While brushing up on Jewish, Christian, and Muslim scripture for my introductory classes on Abrahamic religions, I've been thinking about the composition, construction, and ongoing interpretation of scripture. The textbook I use (Jews, Christians, Muslims by Corrigan, et al.) emphasizes the role of community in turning words and books into scripture. Even if it is what it claims, the BOM's history is incredibly different. No one in the United States or elsewhere had read it when it "came forth" in 1830. The BOM was a book claiming to be scripture, and then it became scripture when Joseph Smith's relatives and then a whole host of individuals accepted its claims. On a much more superficial level, I was thinking about why certain passages in either the Bible or the BOM "sound like" scripture to me. It may or may not have much to do with inherent beauty or narrative power. More likely, I think, when one sits in congregations and Bible studies and hears the same stories and poems repeatedly (even in different translations), those words start to sound like scripture and take on a sacred meaning. Likewise, certain parts of the BOM now sound like scripture to me. I enjoy hearing the words of Lehi in 2 Nephi 2 ("Adam fell that men might be; and men are, that they might have joy"). That's not "chloroform in print." I like the end of Moroni and the beginning of Lehi partly because they've become familiar to me. They're not scripture to me, because I'm not LDS and don't accept the claims of the BOM. But at the same time, they seem like scripture to me. I enjoy them. The less familiar parts of the BOM are tougher sledding the first time through, just like much of the Bible is rough terrain for newcomers.
Email Post
Labels: book of mormon Mormonism scripture turner's posts

Deseret Destrier said…
"Wish Mormon had announced himself as editor from the get-go."

There are two reasons for this, one internal to the Book of Mormon and one relative to Joseph Smith's translation process. (It is a really weird thing and you'd think it would be addressed sooner!) The latter is the more relevant one:

1. Mormon didn't edit/compile 1 Nephi through Omni. He just found them and threw them into his record whole cloth.

2. Words of Mormon originally preceded the 1 Nephi through Omni section in the translation process. There's significant evidence that Mosiah was the first book, chronologically, that Joseph Smith produced - and that today's Mosiah chapter 1 was actually chapter 3, and the original 1 and 2 are missing (hence no introductory paragraph). After the manuscript was completed, Nephi and his successors' segment was shunted to the front of the book.
February 12, 2013 at 9:31 AM

mapman said…
As a Mormon, it's interesting to read the reactions of a non-Mormon scholar reading the BoM. I've been reading through the book quickly as well (for me it's preparation for a mission), and one of the things that struck me was how much less nuanced and racist the descriptions of the Lamanites by the small plates authors than Mormon's descriptions (for him the main enemies seem to be Nephite dissenters).
February 12, 2013 at 9:43 AM

John G. Turner said…
Thanks, Michael. I need to spend more time investigating the translation order / process.
February 12, 2013 at 10:33 AM

John G. Turner said…
Again, Michael, I suppose I could have noticed this from the title page: "An account written by the hand of Mormon upon plates taken from the plates of Nephi."

Tom Rogers said…
How refreshing, Professor Turner, to encounter such detached yet sympathetic commentary like yours. It rarely crops up in the fierce polemics between most Mormon apologists and an array of skeptics, either previously Mormon or still within the fold. For an excellent discussion of the BofM's narrative structure and an equally insightful comparison of its principal Nephite editors--Nephi, Mormon and Moroni--do acquaint yourself with Grant Hardy's "Understanding the Book of Mormn: A Reader's Guide" (Oxford, 2010).
February 16, 2013 at 7:33 AM

Mike Bennion said…
An interesting take Professor. I read from the Book of Mormon every day. I also read one of the Bible Testaments a few pages every day. I find great depth and richness in both. I also find things that bother me. Some things that do not make sense. I find that, over time, when I read and ask questions, I start to get it. Things that troubled me in the past no longer do. These are deep waters and I love swimming there.
September 19, 2013 at 10:51 PM

John said…
So Nephi made two sets of plates, the small plates which were supposed to contain just the religious stuff and the large plates which are more detailed. The small plates were given to Jacob and passed down until they hit Benjamin when they were kept with the large plates, and apparently never written on again until Mormon found them and wrote Words of Mormon. That is why those early books are short, the plates were supposed to just have notable prophecies and so forth on them instead of being the kingly record (and not all of those writing were exactly spiritual giants).

Once you hit Mosiah then it is the kingly record and so things slow way down and you get more detailed accounts of battles and wars, which thing Mormon appears to have been quite interested in (he did name his son Moroni).

The propaganda of the Nephites about the Lamanites does fall apart in a few places, such as with the sons of Mosiah; There is very good reason, internally to the book, to think that the Nephites were more then a little biased on the subject.
September 20, 2013 at 9:41 PM