Since moving to Tacoma, Washington, in July 2011, I’ve been fascinated to explore a new American subculture, especially given that I spent my first three-plus decades living entirely within the old Confederacy (Texas, Tennessee, Georgia, Virginia, and North Carolina). I knew some of the obvious differences before my move: there’s more gray weather and grunge; the summers are immeasurably better than the South’s, and the scenery is to die for.

But some of the differences surprised me—especially in the realm of religion. While there are more “nones” in the Pacific Northwest, there is an impressive religious infrastructure in urban areas, as well as a preponderance of evangelical mega-churches. In the Puget Sound we have nationally famous preachers like Casey Treat and Marc Driscoll; a recent award-winning documentary on Tacoma’s Life Center Church featured a nationally competitive “Bible Quiz” squad. In general, I’ve found Christianity quite a bit more prevalent than I expected when I moved here. (If anything, I have to work harder to convince my students that history is important than I do in convincing them to pay attention to religion. One of my colleagues described the Pacific Northwest to me as the place people move to in order to forget the past—which is not exactly how I’ve heard the South described.)

So, as we launch Religion in American History version 3.0, I thought I’d launch my own personal series on sightings of religion in the Pacific Northwest. I’ll write about my new region every month on the 13th, unless something else grabs my attention. 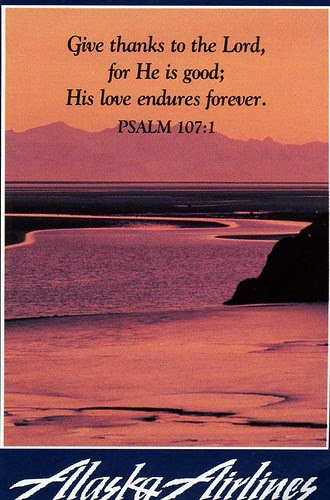 I’ll start the series with a story about Alaska Airlines’ longtime habit of serving up Bible verses with their in-air meals. Alaska is the much-beloved dominant airline in Seattle. That’s not without reason: prices are competitive, and customer service is almost always good. Plus, the Alaskan Amber they serve on board is far superior to other airlines’ alcoholic offerings, and the $6 cheeseburger is the best in-flight meal I’ve ever eaten in coach. But I’ve never gotten a Bible verse with my burger. Alaska stopped serving scripture last February, in response to customer complaints.

What floored me was this: Alaska would be nearly the last airline I’d guess was giving out the gospel. I know the Pacific Northwest has more religion than I suspected, but surely a self-respecting Bible belt airline like Delta or Southwest would be more likely to offer up the good news. Nope: it was Alaska that continued the practice till 2012. As best I can tell, a marketing executive got the program started back in the 1970s as a way of distinguishing Alaska from its competitors. In the last few years the practice was garnering far more negative or bemused attention than it was praise. Still, the decision to do away with in-flight prayer cards met with some resistance. Notably, Sarah Palin, who gave the airline a “shout out” in her autobiography Going Rogue, wrote a Facebook complaint about Alaska’s decision. (I can’t imagine Palin’s disapproval will dissuade many Seattleites from flying Alaska.)

Reading about Alaska’s prayer-card practice triggered two competing thoughts. First, this seems right in line with the soft-sell evangelicalism practiced by fast food franchises like Cook Out and In-and-Out, which feature Bible passages on their cups and bags. Second, the origins of Alaska’s practice in a marketing department suggest a savvy business strategy rather than a heartfelt evangelicalism. Alaska may be one of the last airlines where I’d expect to find Bible verses on my meal tray, but marketing Christianity has rarely been a bad business strategy in the United States.

Charles Richter said…
When I was at UW, we would often run an informal religious identification survey of students in religion courses. Although only about 1/3 of the students identified as Christian when asked an open-ended question about their religious affiliation, around half of those qualified "Christian" with a modifier such as "strong" or "committed." They recognized both the "none" culture of the PNW (at least urban/west of the mountains PNW) and the fact that they stood out, especially on the UW campus. This is one of the reasons that Driscoll has so much success where he does. People like to feel they are taking a stand against something--in this case, secular Seattle culture.

Humbugs. They would never douchebag the Qur'an so. And if the Xtian fundies did, they'd be directed---and rightfully---to another airline, good riddance.

Probably by the exactly the same humbugs.