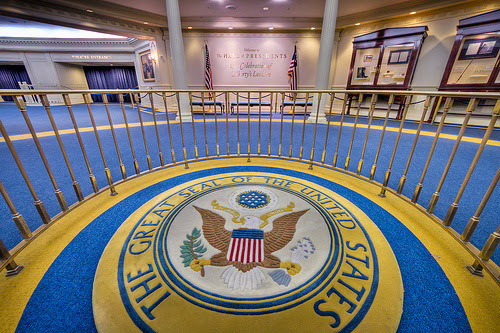 Surprised by a mid-day, 20-degree temperature drop at Disney World last month, my daughter and I took shelter in the Hall of Presidents, an exhibit we probably would have skipped otherwise. The show consisted of a film, narrated by Morgan Freeman, and animatronic figures of all 44 presidents, of whom only Abraham Lincoln and Barack Obama had memorable speaking parts. The overall presentation was short on overt religious references—I caught a few mentions of God by Lincoln, a photo (not commented upon) of LBJ with Billy Graham, and a chorus of “The Battle Hymn of the Republic” in the finale—but it instead provided an interesting perspective on the president as, in the recently controversial words of Atlanta pastor Andy Stanley, the nation’s “pastor in chief.”

The Hall of Presidents constructed its narrative by focusing on a few figures and characteristics. It began, naturally, with George Washington, who was presented as a humble man of the people. He belonged to the Virginia planter aristocracy! my brain objected. But then again, he could have seized a lot more power than he did, so, OK, I guess. By the time I sorted that out, the film had moved onto Andrew Jackson, who (we learned) responded to John Quincy Adams’s criticism of him as a “barbarian and savage who can scarcely spell his own name” with the quip, “It is a damn poor mind that can think of only one way to spell a word.” Nothing about Indian Removal or the spoils system or anything like that, just a celebration of populist democracy taking hold.

The subsequent Lincoln section broke the narrative flow, as the movie screen lifted and the audio-animatronic president emerged to say his piece. A version of this section, “Great Moments with Mr. Lincoln,” debuted at the World’s Fair in 1964, and it still stood out from the material surrounding it, in part because of its greater length and depth. Lincoln was not reduced to a single characteristic, but he was linked to the “march of democracy” theme through Freeman’s introduction, which emphasized that Lincoln was the first president who truly believed that all men were created equal.

Skipping several fairly unmemorable gentlemen, the film picked up again with Teddy Roosevelt. Another man of the people—Freeman told us that Roosevelt refused to call his residence the Executive Mansion, dubbing it simply the “white house”—he was lauded primarily for his ebullient personality, which was on display in numerous grinning pictures. The next featured figure, Franklin Delano Roosevelt, got largely the same treatment. Humbled by polio, Disney’s FDR mainly contributed to history via the fireside chats that lifted American spirits during the Great Depression. Then the youthful John F. Kennedy imparted hopeful energy that propelled demonstrations for civil rights and women’s equality.

Following “commoner in chief” and “cheerleader in chief,” the Hall of Presidents gave us a vision of our political leader as “counselor in chief.” We heard, and saw in photos, Ronald Reagan consoling the nation after the Challenger disaster, Bill Clinton after Oklahoma City, and George W. Bush after 9/11. Collective grief counseling was the most obviously pastoral of the presidential roles and traits on display, and it was the one Andy Stanley had in mind when he referred to post-Newtown Obama. But the high priest of American civil religion, it seems, must be able to perform all three of the duties emphasized in the Hall of Presidents: evoke our common peoplehood, fire up our spirits, and shepherd us in our collective grief. The pastor in chief doesn’t just do funerals. Those are merely the events at which we glimpse some of the many overlapping expectations of presidential and pastoral leadership.

Mark T. Edwards said…
Thanks Elesha for these insightful reflections.

I'm currently reading through Christopher Chapp's Religious Rhetoric and American Politics (Cornell, 2012) and it's amazing how your observations dovetailed with his central arguments. I'm finding it a good, empirical updating of the subject of civil religion, especially as it challenges the idea of a normative culture war. At the same time, Chapp realizes that what he calls "civil religious identity" is largely a Puritan/Protestant construct and, thus, potentially as exclusive as inclusive. Did you find the Hall of Presidents likewise reliant on Protestant preconceptions of personal autonomy or other?
February 19, 2013 at 7:56 AM

Elesha said…
Good question, Mark. To introduce a scholarly framework, the Hall of Presidents show might track most closely with Hatch's (now challenged) argument in _The Democratization of American Christianity_ and its vision of straight-talking, highly energetic men rousing enthusiastic crowds to action. I didn't see as much of a Puritan bent, at least not if you associate Puritans with Calvinism, jeremiads, the "City on a Hill" idea, and being really suspicious of grieving. You could plausibly argue that the Hall of Presidents/Hatch model is uniquely Protestant, though in terms of leadership style, there have been American Catholic priests (and football coaches!) who were also adept at rallying their troops. But whether uniquely Protestant or not, the Hall of Presidents vision, while rhetorically stressing equality and dignity for all, was certainly exclusive. It had no room for dissent of any kind. I actually wondered if tapping Morgan Freeman for the voiceover was in some way an effort to counteract this hegemonic narrative. Like, if a white man were telling the triumphal story, it might come across as disingenuous and self-serving, but if an African American is telling it, it must be true.
February 19, 2013 at 9:07 AM