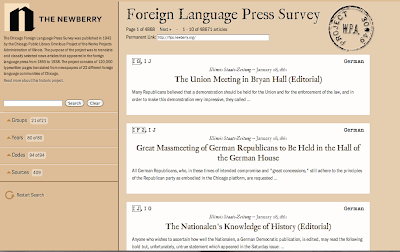 Add this to your list of unexpected but important resources. The Newberry Library's Dr. William M. Scholl Center for American History and Culture is pleased to announce the release of its newest digital resource, the Foreign Language Press Survey.

The FLPS is a collection of nearly 50,000 translated newspaper articles from Chicago's foreign language press published from the 1860s through the 1930s. The project began as a WPA project, and when it finished it had translated over 120,000 pages for articles. For decades this collection of articles has been housed at the University of Chicago's Regenstein Library, where it has been an important resources for scholars interested in the history of race, ethnicity, and the city.  But as a collection, the FLPS was initially very difficult to use. Articles were broken down broadly by ethnic group and subject matter, but there was neither a finding aid nor an index to really know what lay in these hundreds of thousands of papers.

Well, not anymore. In 2009 the Newberry received a grant to digitize and encode the entire press survey. The new FLPS site presents the original translations in fully searchable form, which can be mined for specific terms or be looked at by date, ethnic group, or subject matter.

The WPA conceived of this project as a way to make the history of a diverse, polyglot urban center available to the wider world. Their intent in taking on the project was to mark the evolving nature of the American ethnic experience. The FLPS, however, is also an amazing resource for American religious historians as well. A brief search for "church" yields over 5,000 articles, but the FLPS offers much more than church history.  I find corpuses like the FLPS important for American religious history because it situates religion in its broader social context. As a seemingly "secular" resource, religion appears in the collection as it appears in the broader social and cultural worlds of Chicago's ethnic communities--especially in the context of the city's remarkable diversity. One of my favorite articles, for example, is an confidently titled article "Facts About Everything and Everybody" from the Polish newspaper Narod Polski in 1910. In it a Polish author tries to wrap his head around the American religious landscape in light of the religious worlds from which he came. Those kind of records often aren't found in denominational archives. But they're found on the Foreign Language Press Survey.

So please feel free to dive in, explore, and use the FLPS. It's a great teaching and research source, as a ready made collection of thousands of primary sources.
Email Post
Labels: archives and museums digital humanities museums and archives primary sources research self-promotion

Edward J. Blum said…
just searched around some: not only an amazing resource, but easy to navigate too! tremendous work!
February 8, 2013 at 7:36 PM