On Thursday, April 4, 1968, Dr. Martin Luther King, Jr. was assassinated.  By Friday night, April 5, nine black men in Chicago, ages 16-34, were dead and the city’s west side was on fire.  At least four of those men had been killed by police, carrying shotguns loaded with shells packed with extra shot.  A Sun-Times reporter suspected the four dead were innocent bystanders, targeted by police who had little regard for black life.  While tragic, this type of deadly police violence against black citizens was not uncommon.  But it was hardly noticed by white Americans. 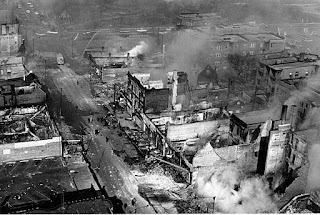 The following Monday, however, Chicago’s Mayor Daley said something that white Americans could not ignore.  Daley described his now-famous “shoot to kill” order.  He said, “I have conferred with the superintendent of police this morning and I gave him the following instructions, which I thought were instructions on the night of the fifth that were not carried out. I said to him very emphatically and very definitely that [he should issue an order] immediately and under his signature to shoot to kill any arsonist or anyone with a Molotov cocktail in his hand in Chicago because they're potential murderers, and to issue a police order to shoot to maim or cripple any arsonists and looters--arsonists to kill and looters to maim and detain.”  Daley’s comments provoked an uproar of complaint, especially from the nation’s African Americans.  Later, Daley’s press secretary said that the reporters should have printed what Daley meant – that the police needed to protect women and children – not what Daley said.  But the damage was done.

Black people were appalled that Daley would so devalue black life.  His comments sparked black Catholics to form at least two black power organizations after the riot.  Those organizations were the Afro-American Patrolman’s League (AAPL) and the Black Catholic Clergy Caucus.

In my post last month, I reviewed Catholics and the American Century, a book that considered how American history narratives would be different if we accounted for Catholics. This month I want to play this idea out in what might, at first glance, seem to be an unexpected way: by pairing Catholics and Black Power.  In 1960, the Catholic Church estimated that black Catholics constituted only six percent of Chicago’s black population.  Yet their presence mattered tremendously, not only for the Church but also for the city.

At the AHA this year, MatthewCressler gave an outstanding paper exploring Black Power and Catholicism by looking at the AAPL.  His paper challenged more traditional ideas that black power was secular, black religion Protestant, and the Catholic Church was white and politically conservative.  Cressler pointed out that by late 1960s, a growing group of black Catholics thought that black power could revolutionize the Catholic Church.

In his paper, Cressler argued that the AAPL was deeply influenced by Catholicism.  The six officers who initially formed the AAPL met in the basement of Holy Angels Church with Father George Clements, who would soon serve as the chaplain for Chicago’s Black Panthers.  Police officer and co-founder Renault Robinson was Catholic as was Ralph Metcalfe, a prominent supporter.  Both men hailed from Corpus Christi parish, a thriving black parish on the South Side.  Soon after its founding, the AAPL became embroiled in several controversies with the Catholic Church that led them to dye a lagoon black on St. Patrick’s Day (when the city dyes the Chicago River green), participate in a black mass, and protest over the Archdiocese’s appointment of black priests to parishes.

Daley’s comment also sparked the first-ever national meeting of black priests.  Father Herman Porter, a black priests from Rockford, IL, invited the nation’s black priests to a special meeting before the regularly scheduled Clergy Conference on the Interracial Apostolate to discuss Daley’s order. (For more on the meeting, see Cyprian Davis’s TheHistory of Black Catholics).  The group proclaimed that “"the Catholic Church in the United States, primarily a white racist institution, has addressed itself primarily to white society and is definitely a part of that society.”

Cressler’s paper pointed out that Catholicism engaged with racial justice, particularly through black power, in the years after 1968.  In doing so, black Catholics forged a new way of being Catholic, one that they thought was both authentically black and truly Catholic.  Their history challenges “common” knowledge, that with the decline of liberal Catholic efforts for integration, Catholics disengaged with race.  Cressler’s paper argues otherwise.  I, for one, am looking forward to reading more of his work.
Email Post
Labels: catholicism karen's posts race and religion religion and civil rights

Tom Van Dyke said…
Ms. Johnson, I'd very much like to know how many people we're talking about in the Afro-American Patrolman’s League (AAPL) and the Black Catholic Clergy Caucus.

Matthew Cressler said…
Thank you so much for posting this, Karen - I am certainly excited about the topic and I'm glad to see a few more people may be too!

The Afro-American Patrolmen's League is similar. It was first founded by just five black Chicago Police officers in the basement of a Catholic church. However, through their activism and lawsuits, the AAPL contributed to a significant expansion the black police force in Chicago.

So, I would say that the proportion of these two organizations (in terms of local and national influence) was much greater than their sheer numbers, which were initially small.
February 19, 2013 at 11:19 AM

I think we're all aware of the danger of looking into past to try to see our own reflections---they tend to look bigger and brighter. So I was inquiring whether these orgs actually had ripples beyond their little splash.
February 19, 2013 at 2:31 PM

Karen Johnson said…
Thanks for both comments! I think the question of significance is an important one. In both cases, it seems to me that the black Catholics' influence went beyond their numbers. With the AAPL, even thought they were small in number, they were an active voice against a white institution, at a significant cost to themselves.
February 19, 2013 at 8:27 PM

Trevor Burrows said…
Karen - Thanks for this post, very insightful. I would be interested in hearing, from either you or from Matthew, about any direct or indirect relationships that we might trace between these Catholics and the later Black Manifesto. Most treatments of the Manifesto seem to consider Catholic and Jewish responses (whether positive or negative) separately from various Protestant responses. Yet by the late '60s, interreligious and ecumenical organizations, usually of the "tri-faith" variety, had sprouted up in any number of cities. Chicago's interreligious community, specifically, really comes together around issues of housing and civil rights in the early '60s (possibly earlier?), and then sort of loses steam and is fractured in the late '60s for any number of reasons.

Yet I've often wondered if the interreligious baton was simply passed to the emerging black power contingent... that is, I wonder if the language and cultural stance of black power provides a new framework for tri-faith cooperation, just as the old guard found a platform for such activity in the language and stance of the movement in the '50s and early '60s.
February 20, 2013 at 6:53 AM

Trevor Burrows said…
As an aside, I recently came across this digital exhibit on the Episcopal Archives website that I thought was very intriguing:

The Church Awakens: African-Americans and the Struggle for Racial Justice

Included are images of some great documents/pamphlets and a pretty solid overview of some of the major issues and events for the Episcopalian community during the period.
February 20, 2013 at 7:00 AM

Karen Johnson said…
Trevor, thanks for the fabulous link on the Episcopal Church. That's quite a resource. I'll have to defer to Matt on the question of the Black Manifesto. But I do know that Chicago's tri-faith community did come together around issues related to racial justice starting in the 1930s and their partnerships really picked up momentum in the post-war era around housing, starting most memorably with the fall-out from the 1951 Cicero riot. The prominent partnerships in te early 1960s were the result of decades of co-laboring across religious and racial lines.
February 20, 2013 at 9:00 AM

Matthew Cressler said…
Trevor, I think this is a really interesting suggestion. As of yet, I am not aware of any direct links between the Black Catholic Clergy Caucus and the Black Manifesto, but there certainly were indirect links. When these black priests declared the Catholic Church a "white racist institution" in 1968, one of their foremost arguments was that the Church disallowed "authentic" black religious culture. When the Black Catholic Movement identified "authentically black" ways of being religious, they turned toward their Protestant brethren - a new possibility for Catholics, following the Second Vatican Council. Black Catholic literature was saturated with quotes from Martin Luther King and Albert Cleage, essays on the black preaching tradition by Baptist ministers, and references to Brother Malcolm (X). I'd argue that the language, culture, and politics of Black Power definitely opened doors to new relationships and alliances across denominational boundaries. As you could imagine, though, it also closed others. So I'm not sure if this new cooperation, though, could rightly be called "tri-faith." I'd have to think more about that.
February 20, 2013 at 9:52 AM