The Strange Theosophical Connection to the U.S. Civil Rights Movement

Last week most of the nation celebrated Martin Luther King, Jr.’s birthday. It was also the day of President Barack Obama’s second inauguration, and for many, an opportunity for community service. In reflecting on the historical events that led to this day, King’s involvement in the civil rights struggle, and the changes it brought forth, I also began thinking about the strange connection Theosophy had in helping the cause of civil rights, both in the United States and in India. Now it may strike one as odd to assert Theosophy has a connection with civil rights, but in fact, the Theosophical Society had an important role in setting civil rights in motion in India, and the American civil rights movement through the person of Mohandas Karamchand Gandhi .

Gandhi grew up relatively secular. It was while attending college in England that he encountered two Theosophists who asked him if he had read the Bhagavad Gita. Sheepishly, he replied no. They invited him to read a copy, as it held a central place within Theosophy. Gandhi did begin to read the Gita, and he attended Theosophical classes. In a biographical essay about Gandhi in The New Yorker, Indian writer, Ved Mehta, relates, “It was actually thanks to his Theosophist friends that Gandhi started learning about his own religion, by reading the Bhagavad Gita, which he was ashamed of never having read, either in the original Sanskrit or in a Gujarati translation, and which he now tackled eagerly in Sir Edwin Arnold’s popular English translation. In time the Bhagavad Gita became the most important book in his life.” At one point Gandhi met with Madame Blavatsky and Annie Besant and they discussed Theosophical doctrine and Hinduism. Gandhi also read Theosophical literature such as The Key to Theosophy, and maintained a constant contact with the Theosophical Society and Besant while in South Africa. Thus it was through Theosophy that Gandhi discovered Hinduism, and in particular, the Gita, a text he found so central to his life. 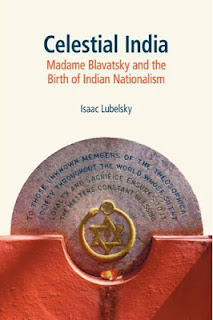 However, this is not all. A number of European and Indian Theosophists helped found the Indian National Congress (INC) in 1885 and held a strong connection with the Indian national rights movement.  Annie Besant, second President of the Theosophical Society, serving from 1907 to 1931, was also elected president of the Indian National Congress in 1917. Moreover, in 1914, Besant and other Theosophists helped found the All India Home Rule League, an organization that lobbied the British government to allow India to rule itself. Isaac Lubelsky documents these interactions and much more in his recent Celestial India: Madame Blavatsky and the Birth of Indian Nationalism (Equinox Pub., 2012). Lubelsky also points out, however, that there eventually arose a tension between well-meaning Europeans seeing India through an Orientalist lens and Indians who strove for leadership of their own nationalism movements and to include all Indians, not just the Brahman elite the Theosophists promoted. Eventually Gandhi was elected president of the INC and he severed the connections between the INC and the Theosophical Society. By 1919, the relationship between Gandhi and Besant had soured and the Theosophical leadership ceased having a role in the INC.

Martin Luther King, Jr.’s admiration and emulation of Gandhi is well known. MLK’s assertion of peaceful resistance was modeled on Gandhi’s effort to gain independence for India, an effort that was realized in 1947. MLK, to the best of my knowledge, did not read Theosophical materials. Yet, had Gandhi not engaged in Theosophy in his college years, discovering the Gita, and had Theosophy not initiated the organizations that later led Indians to realize their independence, there might not have been a non-violent resistance model for the U.S. Civil Rights advocates to emulate.
Email Post
Labels: alternative religious traditions Barack Obama Gandhi India Indian nationalism John Crow's posts martin luther king religion and civil rights Theosophical Society Theosophy

rjc said…
Why "strange"? Henry Steel Olcott re-introduced Buddhism to Ceylon. Many Native Americans have learned about their religious heritage from the Library of Congress, the Smithsonian, and anthropologists. It's a fact of life in a colonial and post-colonial world. African Americans are introduced to African religions in religious studies classes. African pentecostal preachers are introducing pentecostalism to middle-class white Americans. I wonder if we would recognize this sort of thing as not being that unusual in our history our scholarship embraced a more global vision and threw off old assumptions about who is supposed to influence whom. The Theosophy/Ghandhi/INC/MLK story is great, but why call it "strange"?
January 31, 2013 at 11:28 PM

Michael J. Altman said…
To build on the above comment, you could extend this story back further. Gandhi and MLK both also drew on Henry Thoreau, who himself (along with Emerson and others) read the work of Rammohun Roy--especially Roy's translations of the Upanishads and the Vedant.

You could also mix in the the Theosophist's brief encounter with the Arya Samaj, founded by Swami Dayanand, who had been heavily influenced by Rammohun's earlier Brahmo Samaj.

So what you have is a number of religious reformers and innovators in Britain, America, and India whose theologies, social reforms, and political ideologies bounced off one another, mixed, and mingled.

When white Protestants do this sort of global exchange and encounter we call it "transatlantic evangelicalism." We need to think hard about how we want to describe these other movements of exchange, encounter, and influence.
February 1, 2013 at 10:48 AM

John L. Crow said…
RJC, strange has a number of connotations. When I used strange, I meant unexpected or surprising. It is not necessarily a pejorative.

Michael, I think you are correct. These kinds of exchanges are much more common than people think. The whole point of the post is to show that these kinds of interactions and influences are more common than people think. Particularly for the Theosophical Society. It was so large and influenced much, but few people are aware of its impact. This is just one small example of many.
February 2, 2013 at 11:15 AM