Evangelicals at (Another) Political Crossroads?

Having enjoyed several days in the sun on this blog (see here, here, and here), David Swartz's excellent new book, Moral Minority, has also received much favorable attention elsewhere (including reviews in publications as various as the New York Times and Christianity Today; you can read my review over at the Christian Century).  Swartz tells, of course, the story of the evangelical left that emerged in the 1960s and 1970s. 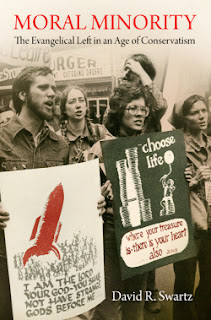 Over at The Immanent Frame, meanwhile, a conversation is now unfolding that carries some of his themes and questions into the present day.  A provocative lead essay by Marcia Pally, entitled "Evangelicals Who Have Left the Right," argues that "where there was once the appearance of a monovocal evangelicalism there is now robust polyphony."  The piece builds on her book, The New Evangelical Left: Expanding the Vision of the Common Good.   Pally's article is worth reading and, while you're at it, be sure not to miss the incisive comment by our very own Arlene Sánchez-Walsh at the bottom of the page.  David Gushee and Joel Hunter have already posted responses, and there are more coming in the days ahead, including one by John Milbank, so stay tuned.
Email Post
Labels: crossposts evangelical center/left Heath's posts religion and politics