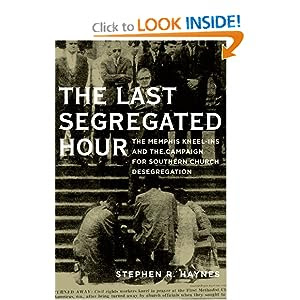 “To hell with Christian principles – we’ve got to save the church,” one church elder in Birmingham responded when challenged at a church meeting on how to deal with African American students seeking to worship at his church in the early 1960s. “Leave the bible out of this. Read The Rise and Fall of the Roman Empire, and you’ll see what’s happening here,” a church elder in Tuskegee, Alabama insisted at the same time.

The religious resistance to the civil rights movement was real, and the hypocrisy of so many white southern churches during the civil rights era is the subject of many works. The quotations above, however, come from a truly outstanding work on this subject, just out with Oxford. Congratulations to Stephen Haynes of Rhodes College for The Last Segregated Hour: The Memphis Kneel-Ins and the Campaign for Southern Church Desegregation.


I have just read this book and my full review will be up later in 2013 at Reviews in American History. To my knowledge, this is the first full-length work investigating the history of kneel-ins in one city. There are memoirs recounting these episodes, and a number of studies focusing particularly on dramatic episodes such as those at Galloway Methodist in Mississippi. But no such work has been done on Memphis, and even those familiar with the larger history of church kneel-ins will likely know little or nothing about the specifics of the controversy at Second Presbyterian Church in Memphis.

And by the way, there are some participants in the drama recounted here that will surprise and interest you, including Jacquelyn Dowd, known to you readers now as the renowned historian Jacquelyn Dowd Hall.


Overall, this is the finest study of the church kneel-ins that I have read, and more generally a signal contribution to civil rights movement historiography. This book does for the kneel-ins approximately what Raymond Arsenault’s recent work did for the Freedom Rides. Both provide definitive accounts but set their stories in broader contexts and trace as well the legacies of the movement.

For a little preview of some of the major points and stories in the book, see Haynes's essay posted here at Huffington Post, also recommended reading. Here's a little excerpt from the last portion of that essay, which discusses the "legacies" of the kneel-in movement (and the historical memory, and misremembering, of it) that occupy much of the last one-third or so of this book:

Independent Presbyterian Church, the congregation founded on a segregated basis by those who broke away from Second in the wake of the kneel-in crisis, has only recently begun to deal with its own complicated racial history. In 2010, after 45 years of downplaying or denying its racist origins, a sermon attacking the supposed biblical injunction against interracial marriage stirred so much controversy that the pastor resigned and the church began to engage its history in a process of "prayer and corporate repentance." It has been noted that if the American civil rights movement had led to a South Africa-style process of "truth and reconciliation," race relations today would look very different. Perhaps, in the absence of a grand scheme of reconciliation, healing will be found in the local practices of truth-telling and repentance that have become one the legacies of the kneel-in movement.

Mark T. Edwards said…
Thanks for this tip, Paul!

I justed used Haynes's book, NOAH'S CURSE, in my early US survey courses and it went over wonderfully.
December 9, 2012 at 10:26 AM