The Evolution of Robert Bellah

As soon as he uttered his first sentence I knew Robert Bellah was about to give my kind of talk. “I sometimes refer to it as my thirty year Babylonian captivity to American Studies,” he said, responding to an introduction that had just reminded the audience that prior to his seminal 1967 article Civil Religion in America, prior to The Broken Covenant and Habits of the Heart, Bellah was trained as a Japanologist and was interested in the evolution of religion, on which he published an article in 1964. 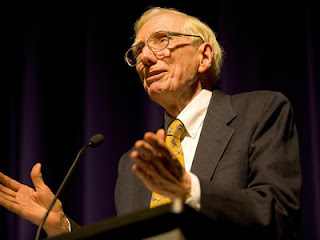 Bellah was at Yale’s MacMillan Center to talk about his newish book, Religion and Human Evolution, which he started writing after his retirement from Berkeley and finished, thirteen years later. It is obviously a large and ambitious book which I won’t try to summarize here, other than to say that about half of it concerns the Axial Age, that period in the middle of the first millennium BCE when Confucius, Siddhartha Gautama, Lao-tze, Athens' dramatists and philosophers, and the major Hebrew prophets were doing their amazing respective things.

The Atlantic published a good Q & A with Bellah on the book, and Harvard just released a thick edited collection of responses to Bellah's work, The Axial Age and Its Consequences.

For the past four months I’ve been trying to wrap my narrow Americanist mind around the 6th century BCE—the heart of the Axial Age—as part of my own research on Psalm 137 (“By the rivers of Babylon”).

Bellah read a paper about how mechanisms of human evolution could produce a disposition for play and ritual, the beginnings of religion. Afterwards he got into a surprisingly testy exchange with Yale religious studies professor Dale Martin, who criticized Bellah for offering an essentialized, purely phenomenological definition of religion that has little to do with how actual people think about religion.

Martin also criticized the standard periodizing of the Axial Age, claiming that a more truly axial age would be the period 200-800 CE, when the three world religions that have done the most to shape the last millennium were being consolidated.

Bellah would have none of these criticisms, which he said he’s heard many times before. Now 85 and still going strong, he’s hoping to write a sequel to his last book, spinning out its consequences into the modern period. “Working on this book [Evolution and Human Religion] for 13 years was a joy,” he said toward the end of his talk. “Every day I learned something new I was happy.” Afterwards everyone adjourned to a lavish reception upstairs, which is the pattern here. Never before have I encountered so much fine food and beverage served after academic talks.
Email Post
Labels: civil religion historical consciousness religion and evolution stowe's posts