More Color of Christ, More Religion and the Election, and a Little Southern Religion before the JSR

Before Ed Blum appeared on some obscure NPR program, he really struck gold with a Journal of Southern Religion interview. We began the conversation with Ed's personal reasons for writing The Color of Christ, then moved on to the complicated story of Jesus’s skin color. Ed concluded by reflecting on writing for popular media outlets, such as the New York Times, the Huffington Post, and CNN. Once you're finished with this, download Mike Pasquier's podcast with Paul Harvey and Kelly Baker on teaching The Color of Christ.  In addition to considering ways to incorporate the book into courses on religion in America, they talk about the interactive website that accompanies The Color of Christ. You'll notice background noise in this interview, which was recorded in a sports bar in Chicago after a day of great sessions at the American Academy of Religion meeting. Listen closely and you might hear Michael Altman (yes, the Michael Altman) in the background.  He was seated next to us, no doubt "feeling the religion elephant" whilst pontificating about hashtags. 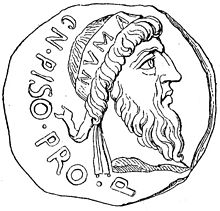 This was one of three podcasts recorded at the AAR.  For the first, I talked with Mark Silk about the 2012 presidential election.  I was particularly excited about this interview, since I am a regular reader of Mark's blog, "Spiritual Politics." Additionally, his JAAR article "Numa Pompilius and the Idea of Civil Religion in the West," convincingly demonstrates that the idea of civil religion has a significant pre-Bellah/Rousseau history. I would contend (pontificate?) that all future studies of civil religion should start here instead of with Bellah's "Civil Religion in America." I dare not dismiss the influence of the latter, an article that I have read many times, cite frequently, and assign in a number of classes. But Silk's article clarifies the definition of civil religion in a way that I have not seen done anywhere else in the literature. Anyway....


In the podcast, Mark discusses his unique career path, from a doctorate in medieval history at Harvard, to the Atlanta Journal-Constitution, and then back to academia. He then considers the major themes of the presidential race, such as the gaining influence of the religiously unaffiliated (or "nones"), Mitt Romney’s Mormonism (he disagrees with Kathryn Lofton), and the possible declining influence of the "evangelical vote." We also talked about the potential influence of people like Richard Cizik and his group, the New Evangelical Partnership for the Common Good. I suspect that David Swartz, author of Moral Minority: The Evangelical Left in an Age of Conservatism, will appreciate this exchange. 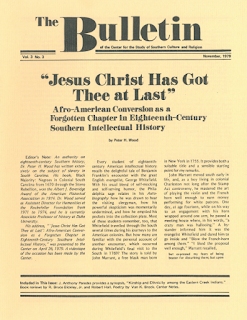 The third podcast brings us to Volume 14 of the JSR, and Emily Clark's insightful article about a little-known predecessor to the journal. Our conversation begins in 1973, when a group of professors in the Religion Department at Florida State University established the Center for the Study of Southern Religion and Culture. For the next eight years, the Center held lectures and symposia and published The Bulletin of the Center of the Study of Southern Religion and Culture. Emily explains how reading through this "time capsule of southern religion" helped her to better understand the historiography, while also offering context for her dissertation, "The Creole Color Line: Religion and Race in Nineteenth Century New Orleans."

So that wraps up the JSR's first year of podcasts. Reception to this has been positive to this point, so we plan to continue. If you have any feedback or ideas, please send me an e-mail, tweet, etc. We are always looking for new ideas and ways to improve.

Thomas Tozer said…
It seems that religion and politics go hand in hand, as do religion, politics, and conflict. What needs to be taught is a message of tolerance. In history you can see how often discord is caused by religious differences. Do you think people can reach a time when there will be more tolerance, ere go more political harmony?
December 14, 2012 at 11:34 AM