Liberals Rising, Part I: An Interview with Matthew Hedstrom 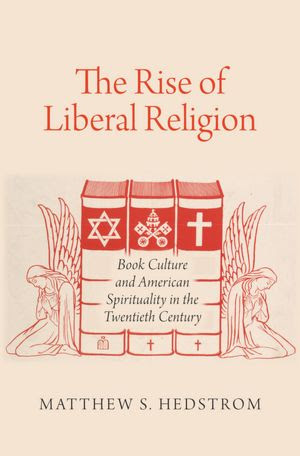 Matthew Hedstrom can now add to his impeccable taste in sushi and gyros a book that deserves every bit of praise it has already received, The Rise of Liberal Religion (Oxford, Nov. 2012).  It will no doubt become a standard-bearer in the cultural history of American spirituality.  I recently “sat down” with Matt to discuss how Santa breaks in to houses that don’t have chimneys, but he insisted on talking about his book and the state of the field instead.

1. Mark Edwards (ME): Why would anyone choose to study religious liberals in our conservative times? What drew you to this general topic?

Matt Hedstrom (MH): Ah, but that’s the thing – we don’t live in conservative times, at least when it comes to the actual religious beliefs and practices of most Americans. I have been taken by the idea of the “cultural victory” of liberal Protestantism, a thesis first advanced by the sociologist Jay Demareth in the mid-1990s and re-worked by Christian Smith and David Hollinger more recently. Smith has studied the religious lives of young adults, while Hollinger writes about the broader mid-century cultural and political impact of what he calls “ecumenical Protestantism,” but both make the same larger point: we need to get outside of church if we want to really understand American religion. This is something that folks who study American Catholicism and Judaism have long understood, but oddly it’s taken a while to apply these same insights to American Protestantism, especially liberal Protestantism.

The other challenge here is the simplistic equation of religious liberalism with liberal Protestantism. I think liberal Protestantism has had tremendous cultural impact in the 20th and 21st centuries, but much of that impact, ironically, has been beyond Protestantism itself, both in other traditions and in the phenomenon of spirituality.

2. ME: I think there used to be an assumption, perhaps still is, that everything that could be said about liberal Protestants had already been said. How do you see your work departing from previous studies of liberal Protestantism?

MH: Culture. Previous studies focused, for the most part, on churches and the intellectual life of leading seminaries, or on the politics of the Social Gospel. This is important work, and I think we are poised for a serious reconsideration of institutional liberal Protestantism. Your work does this, as does Elesha Coffman’s forthcoming The Christian Century and the Rise of the Protestant Mainline (Oxford, May 2013), and others. But I wanted to connect the work of churches, preachers, the Federal Council of Churches and similar organizations to developments in other arenas of culture, and to religious phenomena that don’t happen inside churches. When I found what I thought were some cool sources in book history, I was hooked. I guess that’s the American Studies in me.

3. ME: Your study reminded me of an old joke: Q—What’s a Methodist? A—A Baptist who can read. Why focus on liberal Protestant book culture? Do you think that religious liberals, more so than their conservative counterparts who began channel-surfing for Jesus after World War I, were a peculiar people of the books? Did that narrow focus in part explain why liberals appear to have been left behind by Billy Graham’s techno-evangelicals?

MH: I decided to study books because it helped me get at the questions that most interest me. In particular, I wanted a way to study the mechanisms of culture. How did the religious sensibilities of a late-nineteenth century avant-garde—think of someone like William James—enter the middle class?

Well, if you are interested in the mechanisms of culture, and you study the twentieth-century United States, you have to study media and markets. These are the most powerful forces in American cultural life. I try to make the case that books were a critically important—perhaps the most important—religious commodity of the twentieth century, certainly by the 1920s. In that decade liberals finally and fully abandoned their traditional concerns about the corruptions of the market, and began to market religious book like soap or any other commodity for the first time.

Regarding religious liberals as people of the book: I do think in some ways this is a story that applies particularly to liberals. First of all, in the mid-twentieth century liberals had much more cultural power than conservatives. There really is something to this notion of a liberal establishment. The folks who ran the major trade publishing houses, or sat on the religious books committee of the American Library Association, or coordinated Religious Book Week in the 1920s, or organized the reading programs during World War II—these were liberals, and that kind of cultural power matters.

I tell the story in the book of a librarian from Newark, New Jersey, who came to the American Library Association meeting in 1919 for help, because so many patrons were coming to her asking for religious books after attending a Billy Sunday revival. After a few years of study the ALA began to issue lists of recommended religious books for public libraries, and at the top of the list were books by Harry Emerson Fosdick. Cultural power matters.

And that’s why I don’t think it makes sense to say that liberals were left behind by the techo-evangelicals. Fundamentalists and neo-evangelicals organized to get on radio and television for the same reasons evangelicals have always embraced new media—to spread the gospel—but in the mid-century this drive often had a defensive cast. Liberals controlled mainstream media and publishing, and the conservatives recognized, rightly I think, that they were losing the battle over culture.

Elesha said…
Thanks, Mark and Matt! You're giving me a lot to think about for the mainline/liberal panel at ASCH.
December 18, 2012 at 9:33 AM