God and Whittaker Chambers at Yale 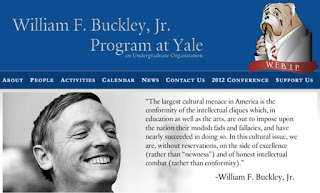 I couldn't resist ducking into the annual symposium of the William F. Buckley, Jr. Program at Yale, devoted this year to the 60th anniversary of Whittaker Chambers’ best-selling autobiography, Witness. The Buckley program  had been running full-page ads in the student newspaper and the speakers included conservative luminaries Elliot Abrams, Alfred Regnery, Roger Kimball, and Norman Podhoretz. I was curious to see a side of Old Yale very little in evidence in recent decades. (This is a community that supports three separate locations of Blue State Coffee.)

I was hoping for a bit of drama, some heckling even, but this was no Tea Party. Merely by appearing at Yale Podhoretz said he was breaking a vow he made years ago never to appear on a university campus, but there was no sign of dissent. The audience filled a smallish lecture hall, maybe 150 people, with only about one in nine or ten of student age. Lots of balding heads and gray hair. Some faces familiar from New Yorker cartoons of plutocrats at the club.  Among the students very few WASPS. This did not look like Bill Buckley’s Yale.

There was general agreement that Chambers—one-time Communist spy, unmasker of Alger Hiss, revealer of the “pumpkin papers,” star writer-editor at Time, a founding editorial board member of Buckley’s National Review—was an authentic American hero and Witness a great and history-shaping work of literature. (Arthur Schlesinger, Jr. called it “one of the really significant American autobiographies.”)

Podhoretz dissented somewhat, opining that Chambers deserves only half credit: he was right about communism but didn’t love America enough.  (This was an idea Podhoretz returned to several times—the need to unconditionally love America, or its free enterprise system, it wasn’t clear which.)

The subject of God did come up. After a number of notably wayward decades, Chambers eventually came out as a staunch Christian.  And those beliefs led him to remain critical of both communism and American capitalism.

Asked how to explain the importance of God to American conservatism, controversial Yale prof Charles Hill replied that the Judeo-Christian religion teach that each individual has a unique soul equally valuable in the eyes of God. The existence of individual souls requires government and institutions that recognize their uniqueness and protect their liberty. Religions or social systems that distort the individual soul are antithetical to freedom.


Abrams and Max Boot worked some with the idea of Islamic extremism as the equivalent of Cold War communism but admitted the analogy wasn’t perfect. The communists were godless and made no bones about it whereas Islamic fundamentalists believe themselves scarily close to God.

To their credit, when Regnery pitched a leading question about allegations that al-Qaeda had infiltrated the State Department—Cold War history repeating itself—Abrams and Boot dismissed the idea as highly unlikely. In their day, Abrams pointed out, American communists could at least make a plausible case that their movement would be good for the United States (and they convinced quite a few well-informed Americans during the Thirties and Forties). No one in their right mind would claim or believe that about al-Qaeda.

At one point Abrams made a backhanded plug for the New York Times: if the newspaper somehow “went away,” about 25 percent of the problem of liberal media bias would be solved.

Toward the end an audience member asked plaintively if anyone could identify a “bright line” for conservatives delineating what they should or should not accept. A bright line of the sort that communism had provided. The panelists looked at each other.  Podhoretz finally responded to say that in this setting he’d better not talk about his idea of a bright line for fear that federal marshals would burst out of the wood paneling and haul him away.

His combative juices flowing a bit, Podhoretz tried to stir things up with comments to that effect that we are currently in a war for the soul of the United States against a president who has promised to radically transform the United States into, at best, a European social democracy.

But the final speaker, Peter Berkowitz of the Hoover Foundation, made a reasoned plea for moderation in politics based on conservative constitutionalism faithful to the spirit of the Federalist Papers.

And he told the audience to accept the reality of big government and of the sexual revolution. Get over it—all the wishful thinking in the world won’t roll those back. This couldn’t have gone over well with everybody but I heard plenty of applause when he finished.

Kevin M. Schultz said…
Thanks for the great write up. Sounds eventful, in its own way. Sounds like a lot of wound-licking too. Buckley, of course, would have been appalled at the lack of serious fisticuffs and, more dangerously, the lack of engagement with a real opposition. But Buckley's movement hasn't been his for some time now anyway. It's interesting that the religious component of the talk (as represented here) is limited to Chambers rebuke of the libertarian ethos of modern conservatism. Where is God and Walmart? Seems like conservatives might be hesitant to adopt that argument...
December 3, 2012 at 7:44 AM

David Stowe said…
There was some talk of repression of religion in China, Kevin, and its Gulag in the western provinces. But from what I remember Hill was the only one who made much of a pitch for God or religion.
December 3, 2012 at 4:03 PM