Roundtable Review of God and War

If you haven't yet seen it, our friends at the U.S. Intellectual History blog featured a roundtable review of  Raymond Haberski's God and War: American Civil Religion since 1945.  David Sehat starts the conversation, asking, "Civil Religion: Who Needs It?" He concludes:


Haberski ends the book with a declaration of civil religion’s indispensability.  It is, he tells us, “the only way to acknowledge that we still need to believe in something worthy of the sacrifices that have been and will continue to be made in the name of the nation” (p. 254).  I see in this statement what I so often see when people start talking about civil religion: Christian theistic assumptions being smuggled into a debate about how people in a pluralistic nation can live and die together.

So, Ray, why again do we Americans need civil religion?

Next up is Andrew Hartman, who confesses that before reading the book, he was "skeptical that civil religion was an important concept in seeking to understand the intellectual history of American nationalism in the second half of the twentieth century."  But... 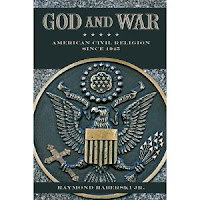 ...what brought me around to the usefulness of civil religion as a concept important for intellectual historians was Ray’s layering of the different understandings of it. On the one hand were those like Falwell who believed the nation was inherently good because it was a nation under God. On the other hand were those like Lincoln and Niebuhr who had a more ironic understanding of civil religion, those who had complicated views of America in relation to God and war. In this way, Ray understands irony as a form of critical self-reflection. Lincoln and Niebuhr, the heroes of the book, believed they must fight their wars. They believed fighting their wars was the right thing to do and that their conduct must accord with Christian principles. They concluded that their religion played an important role in how they framed their wars. But these ironists never assumed they were acting in the name of God.

Finally, I comment on Haberski's "Search for a New American Creed."


Halfway through God and War, Raymond Haberski shares his own close encounter with American civil religion. In 1976, on Independence Day, the author and his family joined millions of New Yorkers to celebrate the American bicentennial. “As I look back on it now,” he reminisces, “that celebration seems to stand outside of time” (p. 98). Indeed, in this liminal zone of swelling patriotic pride, crowds of strangers found common ground in their shared history. In the wake of Vietnam and Watergate, this sentiment was a welcome reprieve from the otherwise divisive tenor of the time. But if we scratch the surface of this expression of American unity, we find the looming presence of war, as the flashes of fireworks replicate exploding artillery shells. And parades and marching bands merely domesticate images of armed troops and battle formations. War is bloody. War is confusing. War is death. But when war moves from the battlefield to the ritual stage, war is sacred.

To cap it all off, the author responds, leaving us with the following:


Let me end on a note about my use of irony.  In some cases, irony affords us a sense of detachment from the subject we study and through such irony we gain critical insight.  For example, I find it ironic that American Exceptionalism can withstand repeated failures of America to be the last best hope of the earth.  But the irony I find in civil religion is different because rather than pushing me further away from my subject it draws me closer to it.  This irony asks me to imagine how the Lincoln of the Gettysburg Address who seems to find national redemption in war is also the Lincoln of the Second Inaugural who came to rue the idea that war could redeem the nation.  It is an irony that compels me to address the way Reinhold Niebuhr could be both a hawk and a dove; a patriot and a harsh critic of America. And it is an irony that makes me appreciate the complexities in the debate between Richard John Neuhaus and Stanley Hauerwas over the word "we" in a time of war.  I use civil religion because it captures these tensions better than terms that I find too rigid or deterministic, such as religious nationalism or American Exceptionalism.  I use civil religion because it has an irony embedded within it that forces empathy for historical actors who might otherwise invite an irony of detachment.

Many thanks to Lora Burnett for organizing this roundtable review. After you read through this exchange, go ahead and buy the book. The engaging examination of America's complicated relationship with war since World War II makes it worth every penny.
Email Post
Labels: art's posts blogs civil religion crossposts intellectual history new books reviews war

Mark T. Edwards said…
Thanks for this, Art! Excellent reflections on an important and timely book.
November 2, 2012 at 4:10 PM