Reporting Religion Around the World

Readers of this blog may be interested in a new group called the International Association of Religion Journalists. Founded earlier this year, IARP already has more than 400 members drawn from 90 countries. I learned of it through a symposium at Yale yesterday that brought in several leading religion journalists from across the globe.

Listening to the main event, a panel discussion titled "Faith Across Oceans: Leading International Journalists Talk About the Religion Beat," I realized that these journalists have many of the same goals as those of us who teach religious studies courses: to combat religious stereotypes and to promote respect and informed communication about religions familiar and unfamiliar.  The discussants came from Egypt, Australia, Argentina, India, and the United States, but it was striking how many of the challenges they faced as reporters were the same: how to foster better understanding of Islam, and to disentangle popular conceptions Muslims from views about Arabs, the Middle East, shariah law, and terrorism; the tensions posed by immigration—legal and illegal—and resulting changes in the religious landscape; reporting on child sexual abuse in the church; interpreting the rise of the “nones.”

The journalists spoke of the difficulties of translation: how to convey loaded terms like “jihad” or “fundamentalist” which are used in different ways by different movements and leaders.  Panelists acknowledged that journalism, broadly defined, has often fanned the flames of mistrust and religious antagonism. Executive director David Briggs urged that journalists stop focusing on perceived slights posed by other countries and their dominant religions and focus more on promoting understanding within their home societies. “We can be part of increasing religious understanding or part of increasing cycles and violence.” 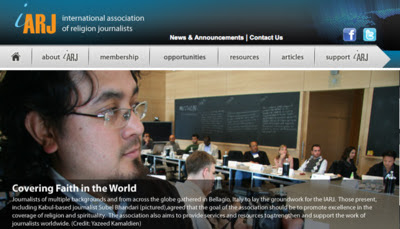 The official goals and objectives of the IARJ are:

As we send our religious studies graduates out into the world of gainful employment it might be useful for some of them to be aware of this organization.
Email Post
Labels: journalism religion and immigration religion and media religion and public life religious intolerance stowe's posts