If you are like us, late November and early December means two things: 1) pumpkin spice lattes; and 2) holiday movies. We're already through how "Santy Claus" defeated the Martians, Bing Crosby bored me to tears in White Christmas (that wonderful scholar of religion and literature Briallen Hopper has some reviews of similar films at "Not Coming to a Theater Near You), and Will Ferrell performed the best bits of wonderment I've ever seen in Elf. As pop culture junkies, I wanted to draw your attention to two other recent phenomena of particular interest to those of us who are religious history pop junkies: 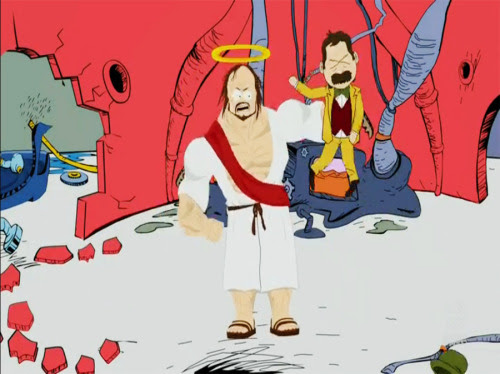 1) South Park recently revealed that Jesus Christ used performance enhancing drugs in yet another spin on the image and meaning of Jesus for Americans
2) Aimee Semple McPherson has been resurrected once again. Thanks to Kathy Lee Gifford, she is now on Broadway. Check out this story at Patheos on it.
Email Post
Labels: christmas comedy culture sister aimee south park

Kevin M. Schultz said…
I think there is a South Park episode for everything. I'm teaching a course now called "Who are We? American National Identity Since the Civil War" and at every topic--affirmative action, immigration (legal and otherwise), Black Power, feminism, anti-feminism, etc--a student raises their hands to say, "Did you see the South Park episode where...."

I have to say no most of the time, but perhaps this is my fault--we started the class by watching the video from Team America (by the writers of South Park) called, "America, Fuck Yeah!" Oops.
December 3, 2012 at 7:46 AM