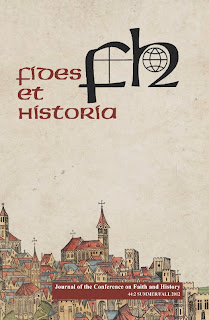 It's that time of year again.  The new issue of Fides et Historia (Summer/Fall 2012) will soon be in mailboxes and on library shelves around the country.  (You can access new and back issues on ATLA as well.)

In this latest issue you'll find dozens of book reviews in theology, religious studies, religion and politics, sociology or religion, and church history along with some very interesting forums and stand-alone essays.

From the Editor Donald A. Yerxa

Roundtable: Beyond the Protestant Nation

A History Beyond “Belief”
Wallace Best

Reflections on Historians, Historiography, and the Confessional Divide
Dana Robert

A Confessional Divide?
Mark A. Noll

The Illegitimacy of the Modern Age
Thomas Albert Howard

In the next installment (Winter/Spring 2013) we'll include a forum on Mormonism as well as articles by Philip Jenkins, Daryl Ireland, and George Harper.