When God Wrote to Abraham (Lincoln) 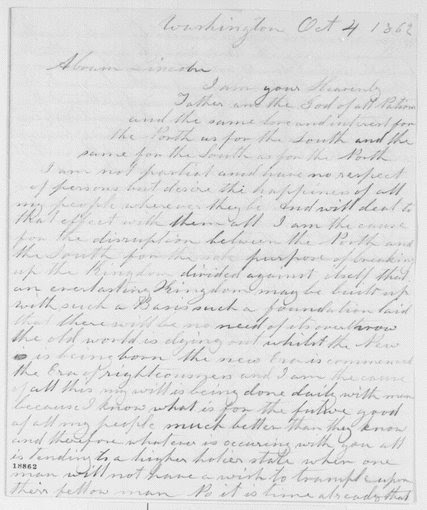 In early October 1862, Abraham Lincoln received a letter from God.

"I am your Heavenly Father and the God of all Nations,” it began. God had particular explanations and instructions for the president, whose entire term of office had been defined by war. “I am the cause for the disruption between the North and the South,” he continued, and the point was to destroy the “horrible state of affairs” that man’s “selfish nature” had brought. “I am not partial and have no respect of persons.” Coming just weeks after the preliminary Emancipation Proclamation, the letter made it clear that God wanted to destroy slavery.

For further instructions, God told Lincoln to gather six of his best men and meet in person “my instrument the Messenger of Peace the Christ of this day.” Conveniently, the “Christ of this day” was not only staying in Washington, but lived just a few miles from the White House, at 476 Pennsylvania Avenue. At the meeting and through the medium, God would explain “what to do that will speedily terminate this Devilish war.”
Email Post
Labels: abraham lincoln crossposts religion and slavery religion and the civil war religion and violence religion in antebellum america religion in the press

Mark T. Edwards said…
Thanks for this tip, Paul. REading Ed's article, I was reminded of a friend's recent acclaimed book, A VISITATION OF GOD by Sean A. Scott (Oxford 2010), which has alot to say about how the war was interpreted "on the ground."
October 23, 2012 at 12:00 PM