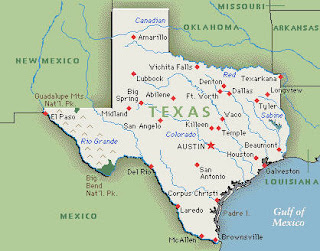 I took a road trip to central Texas recently--the first time anyone in my family had gone back to Rockdale and Dimebox in nearly 70 years.  I have spent most of my life enrapt in my urban identity as a 4th generation Latina living in Los Angeles--growing up in East L.A. and cultivating that identity to the detriment of the much longer rural history of my extended family.  But this trip, first to a town of 300 people where my grandmother was born in 1915 schooled me, as they say down here, that I’d gotten way above my “raisin’” by ignoring the land that my family had worked.  That my family has been tilling soil of various kinds for decades--first in the cotton fields of Central Texas, and today in the agribusiness factories of Corcoran, California disappeared from my historical memory as had the importance of the Catholicism that has guided my family for over a century. In the census, I met my great-grandfather, Jesús Flores, who immigrated from Durango, Mexico in 1904. According to my father, who has the vaguest memory of him, Great-grandpa Jesús wore a cowboy hat and had a big handlebar mustache, ( my fertile imagination thinks Antonio Banderas, I know he’s a Spaniard), but I have no idea.  I do know that Great-Grandpa Jesús raised a family in DimeBox, Texas, and that the kids, one of whom was my grandma Guadalupe, all worked the fields.

My grandma was a difficult person, she died a few years ago, and unlike just about any other funeral I have attended for my large large extended family--the Catholic priest who presided over the funeral mass, had no idea who she was, tried very hard to make her seem like a loving matriarch, and ended up upsetting most of my immediate family with  tales about her that we knew just were not true. My family even asked me, as the resident religious geek, (two things we don’t discuss in my family, my conversion to Pentecostalism, or my profession, both things are equally baffling to them), to write a letter to the Archdiocese complaining that the priest had committed, what my irreverent brother coined, “some kind of sacramental malpractice.” I never wrote that letter, but I did try to explain to my family that the priest, probably feeling intense pressure from the grandma’s side of the family, to say nice things.


I did not know that grandma was born and raised in DimeBox until earlier this year, so my road trip was an attempt to head back to the ancestral land to see if I could get some clue to grandma’s prickly personality--alas, I did not find much.  The only hints I  put together about my grandma, was that picking cotton was hard work--the heat, the insects, the constant aches and pains.  Once she moved to Los Angeles with my grandfather and my dad in 1941, she never worked again--preferring to stay at home, often shopping, and demanding the respect of a matriarch. I think our side of the family always held that against her, the elevated view of herself that eventually led her to abandon my father, who was raised by various aunts and uncles. Grandma Lupe did not live up to the prescribed stereotype of the doting Catholic Mexican mother--but believed for the better part of her 92 years that she deserved more than her raisin’.
My trip to nearby Rockdale, population 5000, had a more defined purpose than my quick stop in DimeBox. Rockdale is as close to Tejana as I can admit that I am--it’s existence is owed to railroads that allowed the U.S. Mexican free flow of goods and people to continue throughout most of the 20th century. First as a agricultural town where my family worked the land of the Charles family--picking cotton.  Later, Rockdale became a mining town, drawing another wave of Mexican work force, who’d mined the lignite mines of the area for decades.

Rockdale, like most Texas cities, was segregated when my family lived there from the 1910’s through 1940s.  The census records I found for my relatives born in Texas, were all classified as “white,” which was not surprising to me, since they would not have been able to work on the Charles ranch had they been classified any other way--but the racialization my family escaped in Rockdale was far removed from the de facto segregation I experienced growing up in East LA--I found that existence to be more normal than the pictures I saw at the Rockdale library when I went in search of the plot of land my family worked.

In those pictures, the cemetery records, and at the Rockdale Train Depot Museum--I saw the Colored School, the segregated burial grounds of the AME church, the Jewish cemetery, and the “Mexican” section of Milam county’s dozen or so cemeteries.  At the Rockdale Train Depot, where I bought lots of souvenirs for my grand-uncle, who was born in Rockdale in 1919, I found a most helpful docent, who showed me the imprint of a barrier that escaped being painted over during the last re-touching of the historical landmark.   The docent pointed to the faded brown floor and told me, that this was the “color line” where African Americans would enter from the backdoor and stand behind the barrier before getting on the train.  Mexican travelers, because they were considered “white,” did not face that same indignity, they traveled the rails, the docent told me, moving back and forth from Central Texas to Mexico for work and to visit their relatives.  We concluded our conversation and she asked me if my dad was ever planning on visiting his hometown--I said probably not, my dad is not much of a traveler--she responded, “well, at least you got to come home, that is a good thing.”

On Sunday, I had a choice to visit a Latino Pentecostal store front church or St. Joseph’s Catholic Church, I chose to attend the Spanish language Mass because my great-uncle was baptized here in early 1920. That actual church is no longer standing, having been razed by fire in the 40s, turned into a Pentecostal church in the 60s, and re-consecrated as a Catholic church in the 70s at its present location, in the middle-class, mostly white part of town, north of Highway 79.  I entered, crossed myself with holy water, and knelt before entering the pew--memorias.  This Mass echoes historical memories that I no longer see or hear--a cappella hymns of women, reading out of the Catholic missal, the multiple crossings oneself does--as you enter the church, as you sit down, as you stand, as you kneel, over your heart, your mouth, and on your forehead. This is the first Spanish I learned---Catholic prayers of contrition--mea culpa, mea culpa.  The laity were all Spanish-speaking, probably Mexican immigrants. The service was unremarkable except for the priests, a tall Brazilian who spoke Spanish with a Portuguese accent, and a Filipino priest who spoke Spanish with distinct Tagalog inflections--both were odd and disconcerting, but the parishioners seemed used to it.

Throughout my weekend in Rockdale, I saw the latest wave of Mexican immigrants--enjoying large plates of carne asada y cerveza at the local Mexican restaurant, running the Donut Palace, where I ordered  dos de chocolate por favor, and who, no doubt, work those same fields my family did nearly 70 years ago.  Sometimes, it does take alot for me to be shaken from my L.A.-ness, the identity that starts on Brooklyn Avenue and ends somewhere in the sprawl of L.A.’s burbs. But my history, as a reluctant Tejana with deep Tejas roots, and more deeply Mexican Catholicism--is something I can’t afford to forget, its in those fields and churches where most of my family still lives and works.
Email Post
Labels: arlene's posts catholicism memory pentecostalism religion and immigration roots

John G. Turner said…
Thanks for sharing this history, Arlene. Beautifully written.
October 24, 2012 at 8:48 AM

Sikkema said…
I am always fascinated by people who trace their family stories back in great detail. I really enjoyed this.
October 28, 2012 at 7:50 AM