1979 was an annus mirabilis in American religious history. Working tirelessly along the east coast, three men responded to the racial, political, gender, technological, and cultural momentums of the past decades to create something that would transform the entire nation, if not the world. When they hit the airwaves, millions of Americans took notice. It began simply enough: “I said a hip hop the hippie the hippie / to the hip hip hop a ya don’t stop.” Fifteen minutes of rhymes followed and we’ve never been the same. The Sugar Hill Gang’s “Rapper’s Delight” introduced countless Americans to the new genre of music, “rap” and the broader culture of “Hip Hop.”

Oh, and something else happened in US religious history in 1979. Three other east coast men, Jerry Falwell, Paul Weyrich, and Richard Viguerie, incorporated the Moral Majority.

What does Hip Hop have to do with the Moral Majority? Or, to channel my inner Makaveli:

Does the H-H revolution
have any God talk to incarnate
for the graying M&M delusion
or do these two form naked hate?

what finger you gonna point
D’evil Falwell at Jay-Z
You both bad men to anoint,
Still no Jesus piece for me.

Two new books had me riveted on the topic during my recent trip to and from upstate New York. As I traveled to enjoy the company of Richard Bailey at Canisius College, Josh Dubler at the University of Richmond, Dai Newman and the graduate students of Syracuse's religious studies program, and the race and secularism gang at Syracuse University, I carted along Ebony A. Utley’s Rap and Religion: Understanding the Gangsta’s God and Matthew Avery Sutton’s Jerry Falwell and the Rise of the Religious Right: A Brief History with Documents. Both were a treat on their own, and when brought together showcased how dynamic the past forty years have been vis-à-vis religion in the United States and how many ways there are to study it. 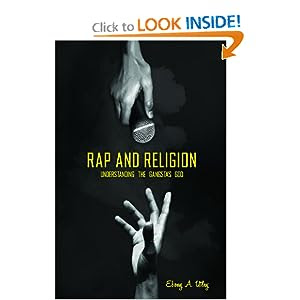 Utley’s work asks “why do rappers include God in their raps about murder, misogyny, and mayhem?” Examining rap lyrics, videos, and liner notes, she suggests that God and devil talk allow rappers to address a series of problems, including the history of urban crises, drug culture, urban violence, government withdrawal, and the emergence of the carceral state. Rappers invoke a God “out there” (importantly not “up there”) and also a God “down here” as ways to address problems of power, agency, and social traps. For male and female rappers, God as a father figure holds important, although often conflicted, meanings. When it came to the devil, he came in various forms: sometimes as a white man who offered wealth and authority; sometimes as a sexy woman who could derail the rapper from other delights; and sometimes as the rapper himself who wielded demonic strength. At the end of Rap and Religion, Utley provides statistical data from a survey of religious views about rap from students at CSU-Long Beach and interviews with several scholars, choreographers, and music producers.

Perhaps the best example in Utley’s book is Ice Cube’s “When I Get To Heaven” (1993). In it, as Utley points out, Ice Cube “lambasts Christianity for its hypocrisy, moneygrubbing, and racism.” The church is a fashion show; the priest is a beast; and the minister loves materialism. Ice Cube’s God is a “killer from the start,” which in the rap universe is not necessarily bad (who is killing, why, and who is being killed matters – just as the metaphorical killing of another can simply mean besting).

Jerry Falwell probably never listened to any of this music, but he did like the Christian “rap” group DC Talk, and his ilk certainly expressed concern over it (which means attacking it). Matthew Avery Sutton places Falwell at the center of the nexus of religion and politics during the late twentieth century, and the findings are tremendous. After a short introduction where Sutton maps out Falwell’s life vis-à-vis larger shifts in American history such as the civil rights movement, political scandals of the 1970s, contests over women’s rights and shifts in normative family definitions, reproductive and individual rights, and the relationship between “the church and the state.” Sutton’s book is part of the Bedford/St. Martin’s series that has some of the best teaching volumes out there.

Sutton’s volume is definitely teachable (and I’m using it for my US history survey in the spring). We are brought into the evangelical universe of political, social, and cultural problems. How shall they engage society, the new evangelicals ask the old fundamentalists? How will they respond to racial integration that is forced upon them (or at least desegregation if any women or men of color want to join) by a federal government that also wants to ensure that these churches, organizations, and colleges are not defrauding investors? How should they respond to abortion, since it has typically been a prominent issue for Catholics? And should they reject public schools, the domains that had been so important in developing the patriotic fervor many of them had felt as youths? Sutton’s documents illuminate all of these problems and more, and I cannot wait for my students to wrestle with the evangelicals’ positions and how they continue to impact contemporary politics.

So much about this book is outstanding. Unlike some other works in the Bedford/St. Martin’s series, Sutton’s introduction is manageable for the classroom. In 25 pages, he narrates not only Falwell’s history, but the contours of the broader histories we teach for those decades. The documents are terrific as well – ranging from Billy Graham and Hal Lindsey worried about the state of the nation and world to Larry Flynt eulogizing Jerry Falwell with whit and ire.

My favorite document was Tim LaHaye on “A Christian View of Radical Sex Education.” LaHaye explains that “Jesus Christ … was the originator of sex.” Cool! Then LaHaye provides some examples of “RADICAL SEX EDUCATION.” Sadly, there are no pictures. LaHaye then denounces teachers for showing videos where high school teachers learn how to put on contraceptives (banana + condom = sex education) or where seventh graders are encouraged to ask their parents how many times they have intercourse. All of this is part of an atheist agenda to destroy the home and the nation.

Returning to my original question, what has hip hop to do with the Moral Majority, we can bring Utley and Sutton together through an emphasis on masculinized material and performative cultures. Falwell may never have worn a “Jesus piece,” as rappers like Notorious B.I.G. did to link Jesus to excessive wealth and ostentatious show, but Falwell certainly enjoyed financial benefits from his ministry and celebrity status for his over-the-top rants. Similarly, while Kanye West would not have blamed lesbians, feminists, and gays for 9/11, he and other rappers certainly point fingers at those they oppose. What joins the so-called righteous rappers and the so-called moral majority together seems to be assertive and aggressive claims to knowledge of what is holy and what is evil, what is worth preserving and what must be destroyed.
Email Post
Labels: evangelicalism fundamentalism new books rap religion and music

Anthony Petro said…
Thanks for the review, Ed! I have to second the praise for Sutton's book. I pre-ordered my copy, which arrived literally the morning of my class session on the Christian Right. Of course, I didn't get full use of it (next time!), but I still grabbed a view of the documents and the timeline at the end. I really liked the piece on the religious leaders' breakfast with Carter -- so much going on there, and it taught extremely well. I can't wait to assign the whole thing next time around.
October 30, 2012 at 10:57 AM

Christopher said…
Thanks, Ed. Now there's two more books I want to read that have nothing to do with my dissertation. C'mon--start recommending and reviewing books relevant to my research! :)
October 30, 2012 at 7:11 PM

He fought many battles but chose no particular socio-political hill to die on, and did leave behind a school of some minimal gravity.

Perhaps all trace of the Religious Right will be erased in 100 years. Perhaps not. This observer continues to become less and less fascinated with his ideological mentor Francis Schaeffer and increasingly with the far more ordinary man Falwell.

Benji said…
Glad to see something on hip-hop! Integrating this late 20th century art form into larger narratives of American religion is a task I'm very interested in and currently executing. The work of historian and scholar of religion Josef Sorret is nuanced, theoretically and historically informed, and quite helpful in this work as he tracks shifts within hip-hop from Muslim to Christian idioms through the work of Kanye West and others. My own work takes up California-based hip-hop as a way of investigating the interplay of pentecostal imagery and prophetic criticism of the larger American nation state. Ice Cube is essential to this project, only in his case we would take up the Nation of Islam as our subject's vocabulary. For those interested, my piece in the "Bulletin for the Study of Religion" (40:3 2011) takes up hip-hop as a subject of American religious history. This issue also has a chapter by scholar of religion Monica Miller whose recent book, "Hip Hop and Religion," combines qualitative, quantitative, and theoretical methods in evaluating trends in scholarly writing on hip-hop and religion. Great stuff!
November 6, 2012 at 11:36 AM