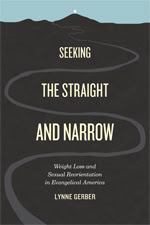 Today's interview is with Lynne Gerber, the author of Seeking the Straight and Narrow: Weight Loss and Sexual Reorientation in Evangelical America. This fantastic ethnography compares First Place, a Christian weight loss program, and Exodus International, a constellation of ex-gay ministries. This comparison illuminates the problem of excess, of body weight and sexuality, with contemporary evangelicalism. Rather than adhere to narratives of evangelical opposition to American culture, Gerber showcases how connected American and Christian obsessions about weight and sexuality really are.
1. Can you tell us how you came to this research project? Why did you choose to compare Christian weight loss programs and ex-gay ministries? What drew you to this comparison?
The roots of this project are both personal and intellectual. Personal because I’ve had a fascination with evangelical therapeutic culture since I first got hooked listening to James Dobson’s daily Focus on the Family broadcast some time in the 1980s. I spent years listening to him trying to figure out why it was so much like feminist therapeutic culture (not a term I would have used then) yet so politically opposed to it. But it was personal, too, because I wanted to a project that would allow me to delve into the moral signification of body size and fatness. My own life has been shaped deeply by being fat and trying to understand how and why it has such a strong moral charge in American culture. I wanted to use the opportunity of a dissertation to raise those questions, but I needed a concrete context within which to explore them.

Intellectually, I was sparked by an argument Pierre Bourdieu makes about the body in social movements. He writes about how important the body is as a site for the accumulation of social knowledge and power and that for social change to be effective the body needs to be a site of change as well. The example he uses is feminism and the 1970s practice of “consciousness raising.” Raising consciousness is all well and good, but he suggests that for change to be more longstanding, feminism would have benefitted from strategies that undo how female subordination is somatized. The argument made me think of a documentary I had seen on the ex-gay movement that depicted it as just this sort of experiment, with training on bodily postures and bodily comportment as a way to eradicate homosexuality. And I wondered what he would think about that.

But the comparison really came together for me reading Marie Griffith’s Born Again Bodies. I didn’t know there were such a thing as Christian weight loss groups before reading the book. As I read it, it became clear to me that a productive comparison could be made them and ex-gay ministries. Here were two cases of faith based efforts at bodily change that had limited records of success but strongly resonant moral messages about the dangers of excess. Both dealt with groups of people who had faced strong social stigmatization because of their bodily traits, but one, homosexuals, has been far more successful at challenging that stigmatization and resignifying the meaning of homosexuality. And both groups were active within a reasonable distance from my home, which helped.

2. Tell me more about these Christian approaches and nervousness about "excess." What do you think we learn by paying attention to how excess is represented in fat and sexuality?

Both of the issues that I look at in the book, fatness and homosexuality, are deeply shaped by cultural concerns about excess and non-productivity. Fat people’s bodies and presumed appetites are deemed disproportional, out of scale, too big for proper human life. The perceived aesthetic excesses of gay culture and the bodily excesses of “the gay lifestyle” and of non-normative gender practices also make homosexuality vulnerable to this accusation. Gay people and fat people, in these ministries in particular but often in American life more generally, symbolize desire unleashed, run amok and rushing toward self destruction. They’re also suspect because of a perception of non-productivity. Homosexual sex is condemned in part because it isn’t reproductive, it does not result in the creation of new human life. Fat people are perceived to be impaired by their size, unable to contribute to society, and a threat to bottom lines everywhere because of a supposed increase in sick days, medical costs and general sloth. Fat people and gay people are just too much.

These concerns saturate Christian weight loss programs and ex-gay ministries and are especially evident in discussion about self-control and obedience, sin and addiction. Participants in First Place, for example, talked about self-control as one of the fruits of the spirit discussed in the Bible and about the fat body as proof of the lack of this spiritual fruit. The solution was obedience to God’s will, obedience that needed to be practiced with every bite of food taken and not taken. Exodus ministries are also deeply invested in obedience as a strategy to reign in the excesses of homosexuality. Indeed, “falling” from the program and engaging in homosexual sex acts is redeemable in these ministries if they’re used as an opportunity to cultivate obedience. The rhythm between control and lack of control, sin and obedience, “addiction” and “recovery” structures these ministries and their dances with excess.

I think these cases contribute a great deal to social theory about the place of excess in contemporary capitalist society and how the United States in particular deals with the cultural anxieties— and real moral and social problems—generated by our heady mix of abundance and inequality. I also think they make interesting conversation partners with theorists like George Bataille who argues that religion has a deep, intrinsic connection to excess and the problem of that which exceeds usefulness that human societies grapple with


3. While I was reading Seeking the Straight and Narrow, I wondered about the book's relationship to Marie Griffith's Born Again Bodies. Your fantastic book felt like an extension of Griffith's arguments about Christianity's formative role in how Americans interpret bodies. How do you understand your work in relation to Griffith's?
Marie’s book was a major inspiration for this project in many ways. (We’ve also been in intermittent conversation since back in my Focus-listening days and she helped shape this project when it was still a dissertation.) As I mentioned, I wouldn’t have known about Christian weight loss programs if it wasn’t for her book. Her book also helped me see how deeply interconnected discourses of health and the body and Christianity are in American culture. It made me see connections between groups that I consider myself socially distant from, like evangelical weight loss groups, and those that I’m socially much closer to, like the food justice movement, which helped me think through why the fear and loathing of fatness is able to cross the right/left divide in American society whereas the fear and loathing of homosexuality is one of the core symbolic boundaries forging that divide.

We also share a central question that she beautifully articulates as “a concern for the multiple ways in which body type, among assorted possible signifiers, has come to seem a virtually infallible touchstone of the world of persons about whom one knows nothing else, as well as the value – indeed the deepest truths – of one’s own self.” (7) Her work, of course, takes that concern on in much greater historical depth, covering a wider range of American religious experiments with physical exercise, food, eating, and not-eating. By taking the comparative approach and engaging the question of sexuality more directly, my work builds on hers by exploring different kinds of bodily deviations and bodily hungers, showing some of the common moral concerns about fatness and homosexuality while highlighting some important social and political differences.

4. What are you working on now?
I’m currently doing a project on religion and HIV/AIDS in the Castro district, San Francisco’s gay urban enclave. I’m focusing on the Metropolitan Community Church of San Francisco, a self-identified queer church that was deeply impacted by the emergence of AIDS in the 1980s and active in pioneering AIDS programs and ministries and forging political and religious responses to the disease. Fortunately, one of their ministries was recording their services for people too sick to come to church, so I’m working with an amazing audio archive of worship services, memorial services and other events. On the surface it’s quite different from Seeking the Straight and Narrow, but there are a lot of common themes about morality, health, life and death in a context where the social and physical stakes were much, much higher.
Email Post
Labels: author interviews baker's posts new books religion and sexuality religion and the body