The Bible in the Public Square


“Experts say Bible has role in American life,” ran the dog-bites-man headline in the Duke Chronicle.   “Contrary to popular belief,” the article begins, “the Bible affects people’s everyday lives because of its influence on the political and social realm, experts said.”  The experts were on hand for a day-and-a-half conference on “The Bible in the Public Square” sponsored by Duke’s Center for Jewish Studies (with help from the Religion Department and Southern Methodist University). 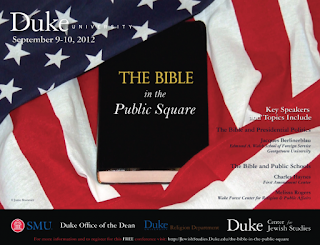 Panels ranged from The Bible and Popular Culture to the Bible and Middle East Policy.  (All sessions were videotaped and can be viewed in their entirety on the conference website--eventually.)  Jacques Berlinerblau, a wisecracking former jazz vibraphonist from Brooklyn who now teaches at Georgetown, opened the conference with a paper on the Bible and presidential politics, reminding us that how scholars read the Bible and assess Biblical literacy is very different from how politicians (and ordinary Bible-believers) read and deploy the Good Book. He also plumbed the mystery of why no one has succeeded in organizing a voting coalition made up of all the religious folk left out of the Religious Right—most Catholics, mainline Protestants, non-Orthodox Jews, Unitarians, Quakers, Pagans, seekers, and so on.  These modernists would number some 90-100 million and be electorally decisive.
Politics was a concern throughout, from a session on the Bible and America’s Founding Era, which included a stem-winding talk from John Fea (Has this man ever considered running for office? He’s got the stature and vocal chops to make a fine congressman at the very least), who took on the work of David Barton, explaining that though the American Revolution was surely drenched in Biblical language the literalists were actually on the Loyalist side. Shalom Goldman delivered a paper on “God’s American Israel,” which detailed the centuries-long American fascination with the Hebrew language and tropes (not so much actual Jews), evidenced most strikingly in Mormonism. “If Israel hadn’t been created,” Goldman asserted, “the U.S. would have had to invent it.”


My powers of concentration were admittedly flagging by late afternoon, but two long papers on the Bible and Middle East Policy by Yaakov Ariel and Mordecai Inbari didn’t add much to what I could remember about the End Times from Boyer, Marsden, and McAlister. The final session included refreshingly crisp presentations from Charles Haynes of the First Amendment Center, Melissa Rogers of the Wake Forest Center for Religion and Public Affairs (those southern lawyers can really orate), and Mark Chancey of SMU, one of the organizers of the conference, who in addition to his scholarship on the New Testament and early Judaism has been active in public interest groups working to ensure that religion courses taught in public schools honor the First Amendment (who spoke as well as a southern lawyer).

The longest session focused on the Bible and Popular Culture.  Adele Reinhartz focused on the Bible in Hollywood, speaking mainly of DeMille’s The Ten Commandments and the 2007 film In the Valley of Elah.  David Morgan examined the Bible as material artifact in people’s lives.  As the Bible has been gradually excised from school classrooms over the 20th century, the flag and Pledge of Allegiance have been substituted in as sacralized objects/rituals (though that hasn’t ended the ongoing struggle to get the Bible into the public square).  Reviewing the way in which Bible stories like Cain and Abel have been represented in Christian comic books (chiefly the “Brick Testament” in which Bible scenes are created from Legos), Reuben Dupertuis argued that these texts function as translations, which generally work to domesticate stories from unfamiliar contexts, i.e. 1200 B.C .E., but sometimes to “foreignize” them.  My own talk presented my ongoing research on Psalm 137 as America’s longest-running protest song.

The focus on the Bible facilitated a lot of back-and-forth movement between Judaism and Christianity, logical given the fact the conference was sponsored by Jewish Studies.  Sacvan Bercovitch emerged as a kind of patron saint of many of the papers, although as Fea pointed out there was that danger of interpreting too much American history through the lens of New England. Sitting through so many sessions so soon after Labor Day felt a little like getting up from a lounge chair at the pool to run a 10K.  But the Duke hospitality was bountiful; we stayed in the Washington Duke Inn and Golf Club, a tony joint that serves reservation-only high tea and boasts a corridor whose walls are covered by historic photos of the Duke dynasty and no fewer than five busts of Duke family patriarchs.  A far cry from the cash-strapped public universities from whence I come.
Email Post
Labels: american judaism bible conferences king james bible stowe's posts

David Stowe said…
John, I'm glad you haven't completely closed the door. I worked on Capitol Hill for four years (back when they managed to get something done) so I know congressional talent when I see it.
September 18, 2012 at 9:21 AM