The Baptism of Early Virginia: Interview with Rebecca Goetz, Part 3

Here is part three, the finale, of our interview with Rebecca Goetz about her new book The Baptism of Early Virginia: How Christianity Created Race (Johns Hopkins University Press, 2012).

7) What is your single favorite document/piece of evidence that you use in the book, and why is it your favorite?

Oh, Morgan Godwyn’s The Negro’s andIndians Advocate (1680) without a doubt. I was ecstatic when I first read it as a graduate student. Godwyn observed and commented upon (acerbically) the very processes I was interested in. My favorite bit of Godwyn: “These two words, Negro and Slave, being by custom grown Homogeneous and Convertible; even as Negro and Christian, Englishman and Heathen, are by the like corrupt Custom and Partiality made Opposites; thereby as it were implying, that the one could not be Christians, nor the other Infidels.” Godwyn is the thread that hold my book together: his words form the introduction and the conclusion, and I think he appears in every single chapter. I’m so fond of him that Travis Glasson and I are going to include his work in our anthology of seventeenth-century critiques of slavery.

How much of this story would be the same, and how much different, if you had focused on a different part of early America? How would
you compare your conclusions with those, for example, of Richard
Bailey's book on race in Puritan New England? 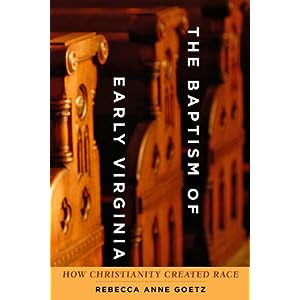 One of the great things about this last decade has been the outpouring of work by junior scholars on questions of religion and race. Richard Bailey’s Race and Redemption (2011) about New England, Travis Glasson’s Mastering Christianity (2012), on the Atlantic history of the Society for the Propagation of the Gospel in Foreign Parts, my own The Baptism of Early Virginia (2012) about the Chesapeake and its Atlantic environs, and Heather M. Kopelson’s forthcoming work on New England and Bermuda. This seems to be a moment in which many historians are interested racial and religious histories of the Atlantic in the seventeenth and eighteenth centuries. I think the most important consequences of this interest are 1) historians can no longer ignore the role religion plays in making race, 2) it’s pretty clear that Europeans in a variety of contexts were thinking about human differences in explicitly religious terms, and 3) Europeans were using those insights to build colonial systems of power and domination. It happened at different paces in different places, and different theologies were at play. My Virginia planters were not nearly as thoughtful as Bailey’s puritans, for example. And my planters weren’t necessarily dealing with the tension between slavery and Christian mission in the same way as Glasson’s SPG missionaries. I almost envy Bailey and Glasson--they have so many explicitly religious sources. I mean, who wouldn’t want to have to sit and read Mather all day?

9) How did Africans, Afro-Virginians, and native Virginians respond
to the ways in which whites used religion to justify systems of
bondage and social dishonor/inferiority? How did they respond, for
example, to Anglican proselytization?

This was one of the hardest aspects of my project. From the beginning I didn’t want this to just be a book about white people acting upon nonwhite people. I also didn’t want the nonwhite people in my book to be merely reacting to the advent of white supremacy. I wanted to be able to think about the ways in which blacks and Indians actively subverted and resisted racialization. This was a little easier in the opening chapters of the book because there is a lot of good secondary literature now on native people’s responses to conquest and colonization (I heart anthropologists) so it wasn’t a gargantuan task to attempt to interpret events and attitudes from native perspectives. It was quite a bit more difficult for later periods because historians have shown quite a bit of interest in blacks and evangelicals, but have generally assumed that enslaved people barely engaged Christianity at all before the Great Awakening, and really, before the American Revolution. My working hypothesis (which I didn’t tackle explicitly in this book) is that enslaved people knew quite a lot about Christianity, that they adopted the parts that made the most sense for them, and then used their syncretic Christianities to resist the dehumanization that comes along with enslavement. My best evidence for resistance comes from the eighteenth century; I outline it towards the end of my last chapter. The most intriguing aspect of this, I think, is that some enslaved people appear to have continued to believe that baptism was a legally acceptable route, and in 1730 actually used this belief to fuel a rebellion. What was frustrating about writing these parts of the book was that the evidence is suggestive rather than conclusive. There’s some good work that has been done about Christianity and resistance that does not discount the power of African religious belief, see for example Jason Young’s Rituals of Resistance (2007) so I’m hopeful that in the future there will be more scholarly work on this. The important takeaway for me, though, is that enslaved black people were very interested in Christianity as a site of resistance very early on. I have enslaved people referring to themselves as “the children of Israel” in the 1720s.

10) Talk about your future project concerning Indian enslavement --
what do you hope to achieve in your next major work?

I started making notes of enslaved Indians in Virginia while I was writing Baptism. In 1627 a group of enslaved Carib Indians were hanged, because “they may hereafter be a means to overthrow the whole Colony.” Technically Indian slavery was illegal in Virginia, yet these Caribs had come from somewhere. After I had sent the Baptism manuscript in and was waiting for the peer review, I decided I would write a paper about those Caribs and how they came to be in Virginia. As usual, I got sidetracked very quickly (though I think in the end I did answer the question of where the Caribs had come from). I ended up writing a paper about the Anglo-French conquest of St. Kitts in 1625, and I established that there is enough evidence to suggest that English people were up to their necks in a circum-Caribbean trade in enslaved Indians. So, my next book is about the enslavement of Indians in the English Atlantic, 1500-1700. I’m really excited about it and I have the opportunity to work on the project a bit next semester at the John Carter Brown Library in Providence, Rhode Island. Come visit!
Email Post
Labels: author interviews primary sources religion and race religion and slavery religion in colonial America virginia

Curtis J Evans said…
Looking forward to the edited volume by you, Rebecca, and Travis Glasson, whose "Mastering Christianity" I'm finding quite helpful in thinking through the significant influence Anglicans had on early debates about slavery, human capacity, natural religion, etc. I hope your edited volume will be as useful as I've found Jeffrey Robert Young's edited, "Proslavery and Sectional Thought in the Early South, 1740-1829," which is obviously the other side of the debate--that is, the active support for and defense of slavery rather than its critique. Young's book has always provoked excellent discussions, both his long and lucid introduction and the primary documents. Good luck on this important project and your future work.
September 22, 2012 at 2:17 PM

Richard A. Bailey said…
"Who wouldn't want to sit and read Mather all day?" Hmmm, is that a loaded question?