For some reason, my mind is pairing up two completely different essays, one that I've just seen (courtesy of Matt Bowman pointing me that direction), one that I meant to link here a while back (one of many things I've been meaning to link to from Religion and Politics -- they keep putting up good stuff faster than I can read and link it).

First is "Small, Good Things," from the Paris Review, a lovely essay paralleling rituals of communion and rituals of writers. A little excerpt: 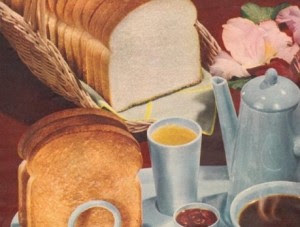 One way of understanding the sacraments, perhaps best articulated by liturgist Gordon Lathrop, is that simple things become central things. When Christians refer to the bath and the table, they refer not only to the specific sacraments of bathing and eating, but they point also to the sacramental character of every bath and every table. The setting apart of one table and one bath shows forth the splendor of all tables and all baths.

That setting apart is the calling of Christians but also the vocation of the writer. The attentiveness of the writer is shown in how that writer lifts to the level of extraordinary the most ordinary of people, places, and things.

I found this piece arresting, as I did one that is in some ways its aesthetic opposite: Sean McCloud's "A Hoosier Remembers Eating Government Cheese." Growing up in Indiana in the 1980s, the author remembers:

It was also a period when I ate my share of government cheese, packaged as two-pound blocks of uncut, white American, and distributed at Monon’s community center. We were not poor enough to be on welfare, but we were not so financially secure as to refuse government cheese. We also got large chunks of butter and boxes of powdered milk. It only took me a few glasses to decide that there was nothing like the taste of warm, powdered milk to make the flavor of Reagan’s beloved Jelly Bellys seem like the indulgence of an aristocracy. Let them eat jellybeans, indeed.
Music moved me to think about the material conditions I experienced and the cultural assumptions in which I grew up. I listened, laughed, and danced to the Dead Kennedys’ “Kill the Poor,” a satirical critique of political attacks on social welfare programs. I felt a combination of anger and pleasure when Stiff Little Fingers sang, “they take away our freedom in the name of liberty.” In short, my favorite bands often put words to my inchoate and adolescent thoughts, urged me to question assumptions, and helped me to imagine a life that might exist outside of the rural Midwest.
Sometime soon I'm going to put these two pieces together for a class, have students read them, and then just say, "discuss." Two different ways of approaching the vocation of the writer, and the meanings of sacraments and rituals.