Authors typically start book projects with two dreams: 1) to get published; 2) to have anyone care about the results. Traveling to Utah after publishing a biography of Brigham Young is very satisfying.
I’ve been used to spending my summers in Utah, but I hadn’t been here since August 2011. Whenever I return to Utah, I notice a combination of constancy and change, reminders of the past and under-construction plans for the future:
▪ Beautiful surroundings juxtaposed with the horror that is Interstate 15. 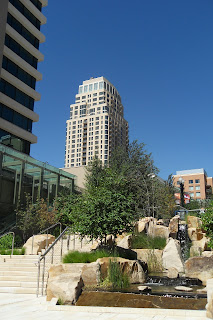 ▪ The completion of City Creek Center, a massive project that has generated both awe and criticism. Brigham Young built railroads and a department store. His twentieth-century successors built the ZCMI mall. Now the LDS Church’s Real Estate Division has produced a downtown project adjacent to Temple Square that includes a shopping center, offices, and apartments.
▪ Caffeinated soda. Most surprisingly, I arrived to find the BYU community in an uproar (relative term) over the recent church statement that the Word of Wisdom does not "prohibit the use of caffeine." A BYU spokesperson made the infelicitous comment that BYU does not sell fully charged Coke because of a lack of student demand. Convenience stores and gas stations near campus are holding their collective breath.
▪ A strange combination of apparent fitness and incredibly unhealthy food. Speaking of the Word of Wisdom, if anything it ought to prohibit the consumption of Crown Burgers (burger topped with pastrami). Definitely unwise. I put my planned nutritional improvements on hold during this week’s trip to Utah. The chocolate shake at Hires was rather egregious as well. And I can’t resist BYU Bookstore fudge or anything from the Provo Bakery. Yikes.

▪ Conversations about the past. I absolutely love talking about Brigham Young with people in Utah. Latter-day Saints (and many other Utahans) care deeply about their history. The events were well attended, and audiences asked many good and cordial questions. This past Tuesday was the 155th anniversary of the Mountain Meadows Massacre, and there were plenty of questions about that subject.
▪ Benchmark Books is a local treasure and repository for many historical treasures. I am grateful to Curt Bench and his family for arranging a wonderful event this week.
▪ Cold storage. I finally took a tour of the Church History Library. Anyone planning to do that, bring a sweater or parka.
▪ Cemeteries and mysteries. During my talks this week, I contrasted Brigham Young’s early spirit-filled leadership with his harsher actions and rhetoric in Utah. In particular, I told the story of Ira West, whom Young repeatedly threatened with decapitation in 1849. I left his fate an open question in my talks, but one member of the audience subsequently cracked the case. It’s a rather long story, but if you are interested, see the write-up here.

▪ Bill Clinton told a group of reporters this week that he once investigated Mormonism through a series of meetings with LDS missionaries. Clinton said that he lost interest once he learned that according to Mormon teaching many of his friends would occupy lesser tiers of celestial glory. My own sources tell me that Clinton expressed disappointment once the missionaries informed him that the church gave up polygamy in 1890. He maintains, however, that Ken Starr is a "son of perdition."
Email Post
Labels: capitalism Mormonism self-promotion Utah word of wisdom

Christopher said…
Thanks for the report, John. I-15 tops the list of things I don't miss about Utah. Near the top of the opposite list--things I really miss about Utah--is Hires, Crown Burger, BYU bookstore fudge, and the opportunity to regularly attend fantastic lectures and events like the ones you've participated in this week.
September 15, 2012 at 12:32 PM

John G. Turner said…
It would have been rough sledding for Brigham Young himself if he had had to abide by his university's honor code. On the other hand, he would hae made one imposing Dean of Students.
September 15, 2012 at 1:36 PM