The Indian Great Awakening: Part 1 of 4 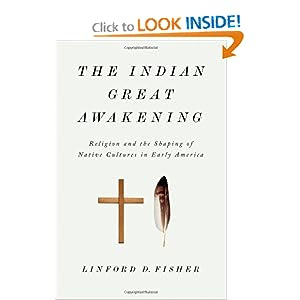 Just a little heads-up: this week we're going to run a 3-part interview series with Linford Fisher, Professor of History at Brown University and author of the marvelous new book The Indian Great Awakening: Religion and the Shaping of Native Cultures in Early America. If you don't want to wait until tomorrow, you can check out Ed Blum and Kevin Schultz's previous conversation with Lin here.

As you might have picked up from some previous posts here this summer, including this one on Tracy Neal Leavelle's new book The Catholic Calumet: Colonial Conversions in French and Indian North America, as well as previous posts about Julianna Barr's work in this period on Florida, the subject of Native religious expression in early "American" history is one of the most vital in the field, and Lin's work is an astonishingly researched and wonderfully written and argued contribution to this discussion (I had the privilege of reading and commenting on the book in manuscript form, so have been looking forward to its publication for a while now).

Incidentally, I've begun to note how much thinking in religious history has made an impact on other works in this field which are not really about "religion" per se, but nonetheless invoke historical explanations and arguments. A notable example: The Comanche Empire, by the historian Pekka Hämäläinen (don't even ask me how to pronounce that), a powerful and sweeping book which has a wonderful section speculating on various reasons why Natives over-hunted bison (beyond the carrying capacity of bison on the plains) in the early to mid-nineteenth century even though preservation of the bison was central to their entire religious ethos.  I'll be discussing Comanche Empire with my students in a few weeks, and I can't wait -- this isn't a work of "religious history" per se so we won't be covering it here, but just to say, along with Lin's book, this is a work that will transform your perspective on an entire history and era, so just a little side plug here before we get to Lin's book in detail.
After the jump break below is a bit more about Lin Fisher's book from the Oxford University Press website, and tomorrow we'll start with a 3-part interview to run Tuesday - Thursday.
(From Oxford University Press website, on The Indian Great Awakening):

The First Great Awakening was a time of heightened religious activity in the colonial New England. Among those whom the English settlers tried to convert to Christianity were the region's native peoples. In this book, Linford Fisher tells the gripping story of American Indians' attempts to wrestle with the ongoing realities of colonialism between the 1670s and 1820. In particular, he looks at how some members of previously unevangelized Indian communities in Connecticut, Rhode Island, western Massachusetts, and Long Island adopted Christian practices, often joining local Congregational churches and receiving baptism. Far from passively sliding into the cultural and physical landscape after King Philip's War, he argues, Native individuals and communities actively tapped into transatlantic structures of power to protect their land rights, welcomed educational opportunities for their children, and joined local white churches. Religion repeatedly stood at the center of these points of cultural engagement, often in hotly contested ways. Although these Native groups had successfully resisted evangelization in the seventeenth century, by the eighteenth century they showed an increasing interest in education and religion. Their sporadic participation in the First Great Awakening marked a continuation of prior forms of cultural engagement. More surprisingly, however, in the decades after the Awakening, Native individuals and sub-groups asserted their religious and cultural autonomy to even greater degrees by leaving English churches and forming their own Indian Separate churches. In the realm of education, too, Natives increasingly took control, preferring local reservation schools and demanding Indian teachers whenever possible. In the 1780s, two small groups of Christian Indians moved to New York and founded new Christian Indian settlements. But the majority of New England Natives-even those who affiliated with Christianity-chose to remain in New England, continuing to assert their own autonomous existence through leasing land, farming, and working on and off the reservations.

While Indian involvement in the Great Awakening has often been seen as total and complete conversion, Fisher's analysis of church records, court documents, and correspondence reveals a more complex reality. Placing the Awakening in context of land loss and the ongoing struggle for cultural autonomy in the eighteenth century casts it as another step in the ongoing, tentative engagement of native peoples with Christian ideas and institutions in the colonial world. Charting this untold story of the Great Awakening and the resultant rise of an Indian Separatism and its effects on Indian cultures as a whole, this gracefully written book challenges long-held notions about religion and Native-Anglo-American interaction

"Linford Fisher's reexamination of New England Native Americans' encounters with Christianity during the eighteenth century shifts us away from sterile old debates. Abandoning either-or categories of 'conversion' and 'resistance,' he discovers people who negotiated the treacherous waters of colonialism by selectively borrowing, adapting, and making their own what missionaries and their government sponsors attempted to force upon them." --Daniel K. Richter, author of Before the Revolution: America's Ancient Pasts
"Linford Fisher's masterful narrative demonstrates Christianity's importance for Native Americans in eighteenth- century New England. Showing how Native Americans maintained their identity and ongoing presence through religion, this lucid and thorough study makes a real contribution to historical studies of early New England." --Amanda Porterfield, author of Conceived in Doubt: Religion and Politics in the New American Nation
"By putting Indians at the center of the Great Awakening, provincial America's quintessential cultural event, Linford Fisher shatters the divisions that have separated American Indian, colonial, and religious history. His deep research and vivid authorial voice capture the depth of New England Indians' engagement with Christian revivalism as they confronted a hostile colonial world. Our understanding of the Awakening and the Indian experience reaches new heights in Fisher's able hands." --David J. Silverman, George Washington University
"Linford Fisher offers a compelling account of how Indian people in south-central New England and eastern Long Island embraced Christianity during the eighteenth century, not in hopes of becoming integrated into Anglo-American society and culture but rather of ensuring their survival and strengthening their distinct identities as Indians. Fisher's most important revelation is the extent of Indian Christians' separation from-and their criticism and even defiance of-Anglo-American Christians. No longer will we be able to write off Native American Christians as brainwashed traitors to their people and cultures."--Neal Salisbury, Smith College
Email Post
Labels: author interviews lin's posts linford fisher native american religion native americans new books new england religion in colonial America

I assigned The Comanche Empire for a course on the American West two years ago. It worked well, despite it being -- for my students -- a long book and a somewhat tough read.

We collectively thought H [we decided to simply refer to Pekka H as "H"] could have spent more time on Comanche religion.

Have you read Gwynne's Empire of the Summer Moon? Somewhat more readable, but I think H's argument-driven narrative actually worked better in the classroom.

Paul Harvey said…
John: Thanks. Agreed on somewhat tough read, but this is for a grad. (MA) course so I don't care if it's a tough read or not, they need to deal with it. Yes, more on Comanche religion would have been nice, but I was learning so much about everything else that I kind of didn't care. Haven't gotten to Empire of the Summer Moon, but did see Brian DeLay's new book reviewed alongside H's book, as another paradigm-shifter.
August 13, 2012 at 9:44 AM