A combative, chain-smoking pixie on the wrong side of history is the not the typical profile of a saint, yet this is how Pauli Murray described herself.  Last month the Episcopal Church admitted Murray to the pantheon of “Holy Women, Holy Men: Celebrating the Saints” in honor of her efforts toward “the universal cause of freedom.”

Early examples come from the 1940s when Murray was on the leading edge of new kind of engagement with racial justice. She lived in the Harlem Ashram, an interracial community that aspired to develop a Gandhian movement in the U.S. The Ashram was a meeting place for James Farmer, Bayard Rustin, and Murray, among others, who experimented with sit-ins and freedom rides. Ashram alumni were on the planning team for CORE’s 1947 Journey of Reconciliation, which tested compliance with the Supreme Court’s 1946 decision in Morgan v. Virginia. Riders hoped to demonstrate integral connections between peace and black freedom, but Murray thought they should do even more. 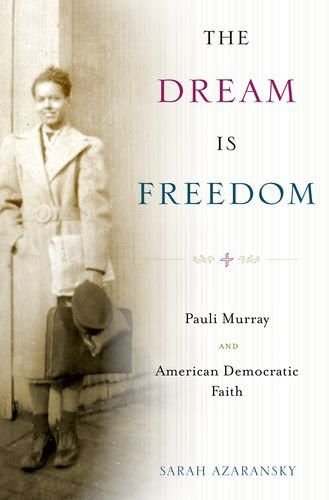 Murray and Ella Baker, the other woman on the planning team, wanted to ride, but, citing safety, the group decided against it. Murray bristled. As the veteran of her own 1940 arrest on a Virginia bus and as the organizer of successful sit-ins in Washington DC in’43 and ’44, Murray was experienced in nonviolence.

She urged her male colleagues to recognize entangling injustices. In a 1947 article she developed the category Jane Crow to describe discrimination as a result of racism and sexism. Murray distinguished Jane Crow from white women’s and black men’s concerns, for, she wrote “within this framework of ‘male supremacy’ as well as ‘white supremacy,’ the Negro woman finds herself at the bottom of the economic and social scale.”

In 1964, she used Jane Crow in her successful lobbying to have “sex” added to equal protection standards of Title VII of the Civil Rights Act. Some opposed the addition of “sex,” because it would distract from the bill’s primary purpose—to end discrimination against African Americans. But Murray revealed this as a false choice. Including “sex” in Title VII would protect black workers, because, like Murray herself, many black workers were women. Murray’s work to shape antidiscrimination law anticipated later engagements by critical race feminists, particularly Kimberlé Crenshaw’s work on intersectionality.

These few examples show why the Episcopal Church calls Murray a “holy woman:” Murray’s universalist vision enabled her to constitute the freedom struggle in new ways.

Yet sainthood entails its own risks.  A saint is, by definition, an individual (while the Nobel Committee recognizes collaboration, for the Church moral perfection remains an individual achievement), and this can obscure how communities form the saint.  In Murray’s case, the Harlem Ashram is a formative community. Another is the tradition of black women’s leadership in liberation movements.  In a sermon Murray compared Hagar (enslaved by Abraham and Sarah and exiled with her son to the desert) to Harriet Tubman, Sojourner Truth, and Dr. Mary McLeod Bethune, who—like Hagar—found a way out of the wilderness.  When the Church elevated Murray, it signaled this lineage of African American women freedom fighters in Murray’s moral formation.

Another risk of sainthood: it minimizes failures and contradictions. When she was living in Ghana in 1960, Murray was alone among U.S. expatriates in extolling the possibilities of American constitutionalism. She falsely prioritized the possibility of American democracy over its bloody realities. At the end of the decade, she struggled to find common ground with Brandeis students who commandeered the building that housed her office. Critiquing their tactics, Murray overlooked how these students drew from internationalism, Pan-Africanism, and calls for black self-determination, which had animated Murray’s own student activism.

Regardless of these imperfections, it’s exciting to have a black, pacifist, feminist lawyer-priest as a new American saint. For more about Pauli Murray and how her legacy contributes to the contemporary common freedom struggle in her hometown of Durham, North Carolina check out the Pauli Murray Project (paulimurrayproject.org).
Email Post
Labels: african american religion Pauli Murray race and religion