My name is Art, and I am a self-loathing college football fan. 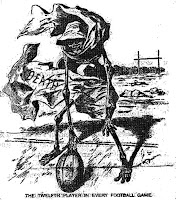 Recently, I listened to a debate on whether or not college football should be banned. I reflexively nodded in agreement with Malcolm Gladwell, who quipped that colleges "should not be in the business of encouraging young men to hit themselves over the head." In contrast, I shook my head in disbelief when Gladwell’s interlocutors responded by saying something akin to, "Yea, college football is corrupt, antithetical to higher education, and physically and mentally destructive. BUT WE LIKE IT!!!  And this is America—damn it!"

OK, it's probably unrealistic to think that college football will be banned any time soon. But after reading Taylor Branch’s scathing indictment of the NCAA, I'm beginning to wonder if it's time to professionalize the sport.  Drop the charade, pay the players, and stop expecting them to attend classes. Would such measures bring an end to the sport as we know it? Maybe. But the Olympics scrapped amateurism, and I'm not sure that it's ever been more popular since.

Oh, and then there’s Penn State—a team that I once followed a little too closely. Enough said…

It’s all rather disheartening and—if I had a shred of integrity—I would turn my back on the sport. But I won’t. No chance. Why? I don't know. Maybe Eric Bain-Selbo is right, and for the game’s true believers, college football has a sort of religious attraction. Eric is author of Game Day and God: Football, Faith, and Politics in the American South and he talked with me about the book for the most recent Journal of Southern Religion podcast. We discuss the rise of college football in the South and how it developed a religious dimension. Eric also reflects on the game's violence and recent scandals in the world of college athletics.

Also new to the JSR podcast collection is my discussion with THE Kelly Baker on her book Gospel According to the Klan. Kelly discusses how she used ethnographic and historical methods to examine the print culture of this "unloved group." She also talks about how and why the Klan translated its identity through a Protestant lens in their time, and where similar rhetorical constructions of nationalism, nativism, and intolerance appear today.

As you listen, you will notice ambient noise in the background, since these podcasts were recorded at the annual meeting of the Society for Values in Higher Education. If you're unfamiliar with the SVHE, check it out. Kelly, Eric, and I participated in a lively discussion on the finer points of compassion and empathy. We began with Nietzsche’s "A Criticism of Morality" from The Will to Power.  We then moved to Didier Fassin and Richard Rechtman's The Empire of Trauma, J. D. Trout’s Why Empathy Matters, and Frans de Waal's The Age of Empathy.  During the sessions, Kelly's fellow UT colleague Allen Dunn masterfully directed the conversation, most of which pivoted back to either Nietzsche or The Empire of Trauma. At one point, I took off on a rather Calvinist rant that—as one participant phrased it—left us all "marinating in sin." I guess all of that self-loathing finally paid off.

If for no other reason, this kind of history provokes great class discussions!
August 27, 2012 at 7:18 PM