After yesterday's post, time to move back to some actual history.

I just learned today that I share a birthday (July 29) with a personal hero, Clarence Jordan, who would have been 100 this year. Jordan was a Southern Baptist visionary, inspiration for a portion of the modern affordable housing movement, and founder of Koinonia farm. Kirk Lyman-Barner reflects here on Jordan's career, including a lot of material about his later life outside Koinonia that I didn't know much about. The article notes some events coming up to commemorate Jordan's life and legacy:

This fall, Jordan will be remembered with the Koinonia Farm 2012 Celebration, chaired by the Jordan's son Lenny, which will begin with the Clarence Jordan Symposium to be held in Americus, Ga., on Sept. 28-29. The event will bring together theologians, activists, academics and lay leadership influenced by Jordan and the Koinonia experiment that is going strong today. President Jimmy Carter and First Lady Rosalynn Carter are honorary co-chairs. Tom Key will perform his one man version of The Cotton Patch Gospel. Topics will include homiletics, partnership housing, environmental theology, racial reconciliation, civil rights, agriculture and more. The honoring of Jordan's legacy that will continue for a month will include the Renovation Blitz Build at the farm Oct. 1-26 and the Koinonia Family Reunion Oct. 26-28.

More specific to the history of Koinonia, the anniversary is a good time also to mention, first, Clarence Jordan: Essential Writings, an invaluable compilation of his work, as well as Tracy K'Meyer's excellent 1997 work Interracialism and Christian Community in the Postwar South: The Story of Koinonia Farm. I'll reprint here a review I did of this work for the Journal of American History many years ago, to highlight K'Meyer's fine work as well as to remember Jordan's remarkable achievements. Review is after the jump. 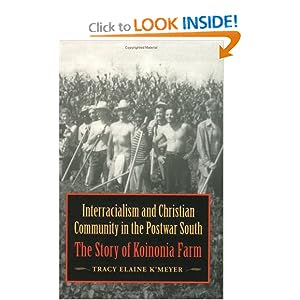 Since Morton Sosna's In Search of the Silent South (1977), historians have continued the search for southern whites who challenged Jim Crow in the years before the Civil Rights Movement, including New Deal liberals such as Virginia Foster Durr, benevolent paternalists such as Willis Duke Weatherford, and reformists affiliated with the Southern Conference on Human Welfare. Among this group, but going far beyond liberalism in his radical commitment to Christian community, was a Southern Baptist trained minister named Clarence Jordan, founder of Koinonia farm in Southwest Georgia, between Americus and Albany. Begun in 1942 as a kind of home mission rural settlement, the farm attracted a small group of evangelicals equally interested in progressive farming, biracial evangelical outreach, and interracial Christian communalism. Always a Southern Baptist in theology, and nationally known in the 1960s for his "cotton patch" translation of the Gospels, Jordan himself always placed his faith in a Christian witness of individuals living together in community as his answer to the race problem.
Problems typical to communalist experiments plagued Koinonia from the beginning. Attempts by local authorities and vigilantes to drive out the farm from Sumter county further frayed the small and fragile community Jordan hoped to build. K'Meyer details how Jordan's vision of complete economic sharing inevitably contradicted his equally fervent vision of whites and blacks living together in community. Local blacks needed economic opportunity and stability and could ill afford to dump their meager resources into a community pot, a reality that Jordan understood very well. Koinonia drew much attention from national church groups, who assumed that the farm was there primarily to establish a base for civil rights activities, despite Jordan's repeated explanations that Koinonia was foremost an experiment in Christian communalism and involved in politics as part of a larger radical Christian witness. Though it harbored black activists such as Charles Sherrod and other SNCC members involved in movement activities in Albany, Clarence Jordan resisted SNCC's philosophy of active nonviolence, clinging instead to a Quaker-like faith in non-resistance and a progressive farmer's belief in economic independence.
Throughout the work, K'Meyer usefully highlights the multiple aims of Koinonia, its attempt both to be an inward looking and quietist experiment in Christian communalism and its equally important goal of outreach, first through a tradition home missions and agricultural extension approach and later through drawing in civil rights and peace activists. The tension between these two goals, added to the economic difficulties of trying to sustain a communalist economic structure while also providing jobs for poor African-Americans in the county and ministering to an ever-increasing roll of visitors and transients, bedeviled Jordan and the farm.
. . . K'Meyer has produced a definitive history of the farm, one of interest for all those who continue the search for the not-so-silent South.
Email Post
Labels: baptists clarence jordan communal experiments religion and economics religion and race southern religion utopias

Karen Johnson said…
Paul - thanks for this post on Clarence Jordan and interracialism. I took really appreciate K'Meyer's book, and particularly her focus on class as a barrier/concern with this brand of interracialism. I have seen that as an issue with Catholic folks who were trying to create a similar form of "koinonia" in northern urban settings (Friendship House). Class limited black people's full participation, and notions of voluntary poverty affected how willing upwardly-mobile black Catholics were to even receive the message (in terms of its words).

Class continues to be an issue today in interracial settings. It often seems easiest to have multi-ethnic/cultural/racial churches if people are coming from similar class backgrounds (see Gerardo Marti's work).
August 14, 2012 at 6:28 AM