David Barton's Fall From Grace? Or, What Do Elitist Professors Have in Common with Adolf Hitler, Saul Alinsky, and Brett Favre?

I want out, but they keep getting me back in.

These classic lines from the otherwise unfortunate sequel film Godfather III came to me when Religion Dispatches suggested I write a piece about the latest David Barton dust-up involving his publisher, Thomas Nelson, pulling its copies and ceasing publication of Barton's most recent book The Jefferson Lies.

After this article from last year (characterizing Barton as an intellectual entrepreneur, a piece I still stand by, and the only thing I ever intended to say on this rather dismal subject), and this article more recently reviewing Warren Throckmorton and Michael Coulter's work Getting Jefferson Right, I had retired from David Barton commentary, hoping to move back to commenting on, you know, actual books containing actual facts and reasoned analysis of stuff that has happened in the past. Or hell, maybe even commenting on defining the term "religion."

Yes, I wanted out, but they got me back in, mostly just to summarize this latest saga, provide links to the various outlets where this has occurred, and provide some brief comments at the end. I also was thinking about why it was some Christian and some conservative (and some who are both) scholars who sliced and diced Barton while the much-feared "liberal media" (ironic quotes intended) tried to stick to the "fair and balanced" approach, mostly depicting Barton as "controversial." 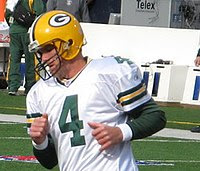 Some of you might enjoy checking out Barton's Facebook page, where the commenters serve as the best primary source for the assertion. A recent post there linking to a related article begins this way:


Question:  What do elitist professors have in common with Adolf Hitler & Saul Alinsky?
Answer:  They masterfully use the powerful art of innuendo to falsely defame those with which they disagree.
And now, like Brett Favre, I am most definitely retired from the subject. Probably. Unless the Packers, or the team in my Fantasy League named "David Barton is a Sexy Beast," call.
Email Post
Labels: crossposts david barton Founders print culture religion and politics religion in the press

Tom Van Dyke said…
Actually, they got him with left-wing activist preachers playing the race card.

Warren Throckmorton said…
@Tom Van Dyke: You are irresponsible in your charge about the Cincinnati preachers. They are all evangelicals who have a history of racial reconciliation. Talking about race when it is relevant is not playing the race card.

@Paul - You are too young to retire

Oh? He hated Sally Hemings, then? Foul brings down foul.

Further, you got Barton rather cheaply.

Barton says there were fines against freeing slaves. We cannot find evidence for this and Barton provides none in The Jefferson Lies. Masters had to guarantee the care of slaves above and below certain ages (see the text of the law below), but these were not fines.

Although "fines" is technically inaccurate, that Jefferson had the financial obstacles to freeing the slaves could have been fleshed into an argument. Barton's incompetence opened the door for the left-wing activist preachers to make a race issue of his book, and without whom the stink likely would not have reached critical mass. I stand by the observation, sir.

And the really interesting part is how these gentlemen got involved in this little Barton sideshow in the first place, why they chose to attack the Barton book instead of say, the $2 bill.
August 12, 2012 at 7:24 AM

Cagey-C said…
I'm not sure that a slave owner's sexual relationship with an enslaved woman presents the strongest piece of evidence against that slave owner's racism.
August 12, 2012 at 12:56 PM

Edward J. Blum said…
TVD asks, I think, an important question. Of all the "lies" and "falsehoods" out there offered by a variety of publications, why have Barton's been honed in upon? Is it purely his popularity? Is it his connection to conservative politics? I'm not agreeing or disagreeing with anything blogged or commented upon here or elsewhere re: Barton. What I'm saying is that Tom's line of questioning (why Barton) is an interesting one to me.
August 12, 2012 at 4:51 PM

Edward J. Blum said…
Part of the discussion I find fascinating in all this is how "the facts" of faith get represented. How do we know what someone believed, when, etc? We really do not know. Regarding other issues like "fines" we can get into the difficulties of freeing slaves as a scholarly debate. Finally, when it comes to the "feelings" of history, those are debatable too. Did Jefferson "hate" slavery or slaves? What would that mean? Is it his opinion of hate or what a slave perceived from him? Again, I'm not trying to weigh in on any side at all, but simply to recognize the questions, language, assumptions, and conclusions are awfully complicated.
Last point what does it mean to say when race "is relevant"? Is there a time when it is not? Is that even possible given US history past or present?
August 12, 2012 at 4:56 PM

Mark T. Edwards said…
ED: to the "why Barton" question, isn't it the same reason why so many young evangelicals (including myself) turned on Francis Schaeffer? Barton, much more so than Schaeffer, pretends to be something he has no intention of being. Everyone gets called out when they are seen as "overstepping" their authority: Pastors when they play politicians or scientists; CFA owners when they play prophet (or "profit") of God; and activist-entrepreneurs when they play historian. The only question is how to call out a David Barton in a way that will minimize the "martyr" narrative always standing ready for their defense. It will be interesting to see if he and Wallbuilders can spin the greatest challenge to their project enough to secure future publishers. All I know is the questions from parents will keep coming: "Do you teach Christian history in your classes?"
August 12, 2012 at 8:09 PM