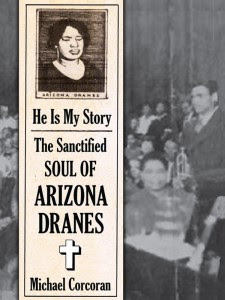 Heard this wonderful story during a glorious bike ride last Sunday afternoon through the Colorado Springs hills, on "Arizona Dranes, Forgotten Mother of the Gospel Beat."

She's not all that forgotten, being prominently featured in works from Lawrence Levine's classic Black Culture and Black Consciousness to the works of gospel music historian Horace Boyer. But that's not to say that your ordinary reader/listener would have heard of her.

I've followed/written about Dranes a little bit in some of my scholarship, but this story retrieves some of her personal background (including her likely classical training) that I didn't know about. And I should add, there's some great stuff about her here, on a blog about important little-known musicians.

Here's a little excerpt:
[Music writer Michael] Corcoran has uncovered as much of Dranes' lost history as anyone ever has for the forthcoming CD package, He Is My Story: The Sanctified Soul of Arizona Dranes.

"She really was the first person to take secular styles and put words of praise on top of them to make gospel music," he tells NPR's Cheryl Corley. "It was extremely influential because people like Thomas Dorsey — who is correctly considered the father of gospel music — he figured, 'Well, I can take blues and put that to gospel music and come up with something new.' But he has acknowledged her as one of his influences."
Corcoran says it wouldn't be quite accurate to call Dranes the mother of gospel — her contribution was more specific than that. Dranes, he says, is responsible for giving gospel its rhythmic identity.
I'm interested to see what will be different (aside from, I hope, extensive and encyclopedic liner notes!) for this new collection from the "Complete Recorded Works" of Dranes that I have previously played until my CD player went on strike. Can't wait to see!
Email Post
Labels: african american religion arizona dranes gospel music music pentecostalism religion and race